This editorial cartoon was in the local paper on Friday. It represents a false choice that the opposition to the Constitution are promulgating—and Spherical Model dispels. 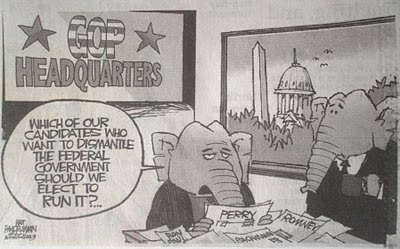 The false choice is between the enormous overreaching federal government favored by the Democrats and other socialists/tyrannists, and the supposed disposal of the federal government, which this cartoon claims is the position of the GOP.
So the question is, do you know any Republican who wants to “conserve” civilization by overthrowing/dismantling/doing away with the federal government? Do you know such a person personally, or in the public view? Anywhere? I don’t.
Think about history just a bit. We started as 13 British colonies declaring independence from the Mother Country on July 4, 1776. At this point, through the war, and up until 1787, these 13 colonies joined together as a confederation (Articles of Confederation). What they found was that, without anything stronger than this loose joining, there was no way to assure these things:
Yes, that is in the Preamble to the Constitution (you just read it in my Friday blog, celebrating the 224th anniversary). These are the limited and specific purposes of a federal government. The rest of the Constitution, including the amendments, spells out the structure that will meet these needs.
If we can be called “conservative,” then what we are conserving is the Constitution. From the point of view of those conserving the Constitution, we’re not trying to figure out which GOP (or other) candidate we should choose to dismantle the federal government as outlined in that precious document—but who will best get us back to it, so we can do those few specific things in “a more perfect union,” as intended.
The very people accusing “conservatives” of being extreme, then, must have something else in mind—something other than “conserving” the purposes and limits of the Constitution.
The false choice offered to most of the people who have lived on the earth has been between the tyranny of chaos and the tyranny of state. But the real choice is between tyranny (of either of those two sorts) and freedom. The Spherical Model shows how both anarchic tyranny and government tyranny are in the lower hemisphere of the sphere. It takes effort from a special people to pull themselves up to freedom in the upper hemisphere.

So the question GOPers are actually asking is, “Which of these candidates will help us move back up to the freedom zone of the Constitution, against the southern pull of the tyrannists?” I don’t know yet which candidate it should be. I do know that each and every one of them is likely to move northward from Obama, because it’s hard to go much further south than his ideology.
There ought to be a guide, to help people judge whether the direction is toward freedom or toward tyranny. Other than our Constitution, I’m afraid it’s just going to require common sense. Let’s apply that to a few issues, just to see how it goes:
Health Care:
Housing:
Education:
Indigent Care:
Hmm. There seems to be a pattern.
Government health care was only recently rammed down our throats in full tyranny manner, even though there has been tyranny creep for some time. But the suddenness has gotten our attention and caused many of us to stand up and say—“No! We don’t want the federal government to decide these personal choices.” The false choice was put to physician Ron Paul in a recent debate: what would you do about a 30-year-old who chose not to purchase insurance and then had a debilitating injury? Do you just let him die without care?
On economic issues, Ron Paul can be pretty sensible. He pointed out that, early in his medical practice, before government interfered, the way it would be handled was, the care would be given, and then the debt was expected to be paid by the patient. And in case he could never do that, that’s what churches and charities were for. Clearly, before government interfered, patients were not left to die until a financial statement was presented (although being deprived of care and left to die happens frequently in socialized medicine countries). And repaying the debt was more doable, because there was a closer connection between the free market and medical care, so costs were more affordable.
For many of us housing choices are still market related. We pay rent we can afford or buy houses when we can qualify for a mortgage. But the government’s interference over the past several decades has led directly to the bubble pop in housing. That crisis would not have happened without government interference. Enough of us are aware of this that we’re standing up to say—“Get out of my housing decisions!” But a growing number of people with an entitlement mentality are fighting that, are insisting that the producers must be coerced by government into providing for their housing. The tyrannists feed the fear of less-able producers (or non-producers) in order to make the decision appear to be between homelessness or government control. But trusting the market has always provided better housing choices at better prices than government has been able to do.
Education is emotionally harder to deal with, because the false choice between government-controlled education and no education at all has been pounded in for a full century. It was fear that we would have an uneducated populous that pressed for government to step in and make education happen—which has led to less education for greater and greater costs. (I wrote about this here.) What would happen if we trusted the market instead of government?
But I agree that any drastic change would be difficult for many specific families, even those who care deeply about the education of their own children. So, until we can regain the idea that education is a good to be provided by the parents (either through home tutoring or through hiring educators of choice through the free market), then we need something less chaotic than abolishment of public schools. So I propose the step toward more freedom would be away from centralized control and toward more local control—abolish federal department of education, limit state departments of education, and  empower local school districts to make decisions relevant to the families involved.
The question for care of the poor requires only that we look at how things were handled prior to LBJ’s Great Society. Good people don’t stand idly by watching people around them starve; good people offer to share what they can. They do it through churches and other charitable organizations. They do it still. But government siphons off a significant amount, filters it through bureaucratic overhead, and then makes the corruption-susceptible choices about who should get what. When churches do it, they can make decisions based on whether a person is really in need—because they know the individuals humbly asking for help. Government is so far removed that the system encourages and subsidizes non-producers, regardless of responsibility for their situation, getting more of what they claim to alleviate.
Here’s the thing to remember: the freedom approach in the Constitution works every time it’s tried—but has rarely been tried. The tyranny approach fails every time it is tried, and we have plenty of historical and contemporary evidence.
So, who should we choose as a candidate? I don’t know specifically which one yet, but it must be someone who honors the Constitution and shows us how we can get back up to the freedom zone of the Constitution. That isn’t dismantling the republic we pledge allegiance to; it’s regaining it from the actual dismantlers.
Posted by Spherical Model at 11:51 AM