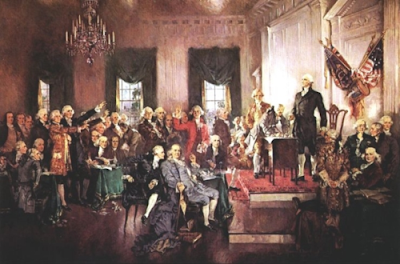 The 224th anniversary of the Constitution is tomorrow, so I thought I’d celebrate that.
I heard a Ronald Reagan quote a couple of times this week:
Freedom is never more than one generation away from extinction. We didn’t pass it to our children in the bloodstream. It must be fought for, protected, and handed on for them to do the same, or one day we will spend our sunset years telling our children and our children’s children what it was once like in the where men were free.
Here’s more from the great Reagan, from his farewell address:
Those of us who are over 35 or so years of age grew up in a different . We were taught very directly what it means to be an American. And we absorbed almost in the air a love of country and an appreciation of its institutions. If you didn’t get these things from your family, you got them in the neighborhood, from the father down the street who fought in , or the family who lost someone in Enzio. Or you could get a sense of patriotism from school.
Or if all else failed, you could get a sense of patriotism from the popular culture. The movies celebrated democratic values and implicitly reinforced the idea that was special. TV was like that too, through the mid-60s. But now we’re about to enter the 90s, and some things have changed. Younger parents aren’t sure that an unambivalent appreciation of is the right thing to teach modern children. And, as for those who create the popular culture, well-grounded patriotism is no longer the style.
Our spirit is back, but we haven’t re-institutionalized it. We’ve got to do a better job of getting across that is freedom—freedom of speech, freedom of religion, freedom of enterprise. And freedom is special and rare. It’s fragile. It needs protection. So we’ve got to teach history, based not on what’s in fashion, but what’s important….
I’m warning of an eradication of the American memory that could result ultimately in an erosion of the American spirit. Let’s start with some basics: more attention to American history, and a greater emphasis on civic ritual.
And let me offer lesson #1 about : all great change in begins at the dinner table. So tomorrow night in the kitchen, I hope the talking begins. And, children, if your parents haven’t been teaching you what it means to be an American, let ‘em know and nail ‘em on it. That would be a very American thing to do (video here).
One thing I love about this is that when Reagan said “we” need to do a better job of teaching, he didn’t even hint that there should be a government program involved in that effort. Start with families, then neighborhoods, then schools and popular culture.

Since I had the privilege of homeschooling my three kids, I got to study the Constitution and American history along with them. And it has become habit. I carry a pocket copy of the Constitution with me in a capacious mom purse, as well as a bookmark listing the 28 Principles of Liberty from The 5000-Year Leap. I’ve used curriculum from the for Constitutional Studies (www.nccs.net) for teaching elementary through high school, along with using the video A More Perfect Union, an award-winning dramatization of the Constitutional Convention. (I wrote more here.)I’ve also taken a one-day seminar from NCCS when they were in town about a year ago.
Right now is offering a free online course on the Constitution. It started yesterday, but since it’s archived, I think you can still get in on everything. Go to Constitution.Hillsdale.edu and register so you can either watch live or access the archives.
Just to celebrate today, I’d like to repeat the Preamble to the Constitution, laying out the proper role of government, outlining the limited purposes of this basis for our law. I suggest memorizing it so that it remains with you and comes to mind as needed:
We the People of the United States, in Order to form a more perfect Union, establish Justice, insure domestic Tranquility, provide for the common defence, promote the general Welfare, and secure the Blessings of Liberty to ourselves and our Posterity, do ordain and establish this Constitution for the United States of America.
May God continue to bless !
Posted by Spherical Model at 11:51 AM