Citizenship in the Nation

I’ve been preparing to help some local Boy Scouts with their Citizenship in the Nation merit badge. I’ve done this a couple of times in the past, and it’s always fun—at least for me. 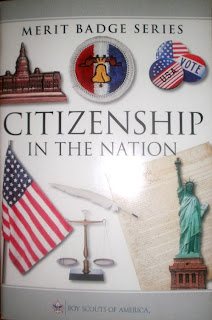 Looking at our Constitution and our role as citizens is something we ought to do from time to time, even when we’re no longer early teenage scouts. You can get the list of requirements, and even much of the merit badge booklet information online—not a bad exercise.
Here are a few of the requirements you might want to take on:
There are some additional to dos: see a historic site, identify and write to your elected officials, read and report on a famous speech that affected your country, and more.
My assignment was mainly to help the scouts gain the knowledge they need. So we were going to take on those listed documents. It’s a good idea to memorize the preamble to the Constitution. I’ve been helping kids do that for a while. With younger kids I’ve used sign language and music to help in the memorization. (In case you’re willing to try this, be aware that the way the brain works, if you use something to help you memorize, like signs, movements, or a song, your brain will most easily access the info using that method, so you might need to hum to yourself or go through at least a smaller version of the movements. Still, not a bad idea.) 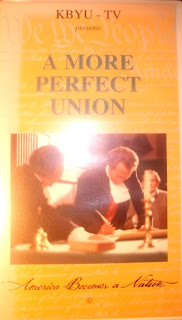 I often use curriculum provided by the for Constitutional Studies: www.nccs.net. One thing they do is provide the video A More Perfect Union, an award-winning depiction of the Constitutional Convention, filmed by media studios back in 1989. It has recently been prepared in DVD form, segmented for study, with accompanying study guide. I got the teacher’s curriculum, which has additional helps, for age groups K-2, 3-4, and 5-12, and I’ve used all the age groups at some point. [If I’m not mistaken, NCCS was founded many years ago by W. Cleon Skousen, author of The 5000-Year Leap and The Real Benjamin Franklin, among a much longer list.]
I’ve also gotten pocket copies of the Constitution (Declaration of Independence and all the Amendments are also included) from NCCS. The Heritage Foundation is another source for pocket Constitutions, for yourself and to share. If you get a bigger supply, say 50, then your costs go way down, to maybe $.50 or so per copy plus shipping. I actually do carry the Constitution around with me in my hold-everything-I-could-possibly-need handbag. And it has been useful on occasion.
With the Scouts, session one is going to include memorizing the Preamble, and going over some of the sections of the Constitution, so they understand the great compromise between equal state representation (the Senate) and representation by population (the House).
When you’re gauging whether something fits into the proper role of government, the Preamble is a good source. Here is what it tells us, divided up into the list:
We the People of the ,
do ordain and establish this Constitution for the .
So the purposes are, in essence, to join together (more perfectly than with the Articles of Confederation), and do things that provide safety and protection at our borders and within, including a justice system for enforcement, and do things generally beneficial to all (such as weights and measures, coining and standardizing money, and a few other limited general assignments), and to make our liberty permanent. Considering how
Posted by Spherical Model at 12:36 PM

Email ThisBlogThis!Share to TwitterShare to FacebookShare to Pinterest
Labels: Boy Scouts, Citizenship in the Nation, Constitution