I got a simple (but not necessarily easy) economics lesson from my son Economic Sphere, which I’d like to share. Be patient through the charts; there are some relevant points we can draw from this.


It came up in conversation (yes, I recognize that we have arcane conversations at our house) that the payroll taxes for Social Security are divided into equal portions paid by the employer and the employee—except for the self-employed who pay the full amount. And this led to a discussion about whether it matters who pays.
So here’s a basic representation of that concept. In this first chart we’re looking at the supply (S) of workers and the demand (D) for workers. The vertical axis is the price (P) paid for an employee per unit of work (such as a man-hour). The horizontal axis is the quantity (Q) of labor units. 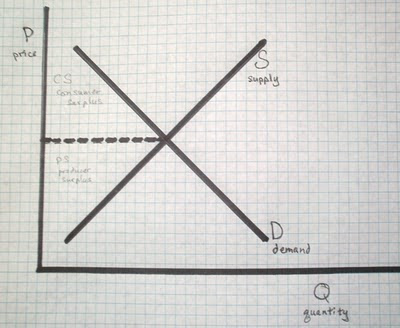 At the low end, there is a small supply of workers willing to work at a low price, and a high demand for workers at that low price. And at the other end there is a high supply of workers willing to work at a high price but a low demand—low number of employers willing to pay that high price. So the supply ascends as price rises, and the demand descends as price rises.
There is an intersection point, above which there is a consumer surplus (the consumer in this case is the employer, who buys units of labor), and below that point a producer surplus (employees willing to produce the units of labor).
What happens when we add a tax? 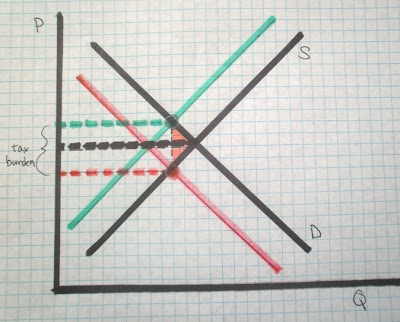 If you put it all on the worker, it looks like the green line: the supply requires a higher price in order for there to be willing workers, assuming all else being equal (meaning the willingness of workers to work at a given price hasn’t changed).
If you put it all on the employer, then the wage at which the employer is willing to hire goes down—the red line. Employers are paying the price at the green dot in order to purchase the amount of labor at the red dot. The harm caused by the tax is the difference between the green and red dots. So things are made worse for both consumer (employer) and producer (employee) when a tax is added. That box is the damage caused by the tax.
But the tax goes to government, so it is in theory paying for something of value. Except, see that orange triangle? That is deadweight loss—not recovered by worker, employer, or government, simply a cost to society as a whole when a tax is imposed.
The angle of the supply and demand lines in our chart above assumes approximately equal elasticity. That means that behavior is approximately equally responsive to changes in price. You’ll notice that the burden caused by the tax is about equal above and below the equilibrium line (black dotted line). That means it doesn’t matter whether the tax is imposed on the employer or the employee, or some combination of the two; the burden affects both approximately equally.
But in real life, demand for labor and supply of labor are not equally elastic.
It happens that the supply of labor is more inelastic than the demand for labor. Whether a person hires depends on the price. An employer can put off hiring or do without, or make do with producing less. When circumstances are more favorable, the employer can choose to hire more workers, but if circumstances are less favorable, the employer is free to simply choose not to hire. So the employer’s decisions about hiring are somewhat elastic. 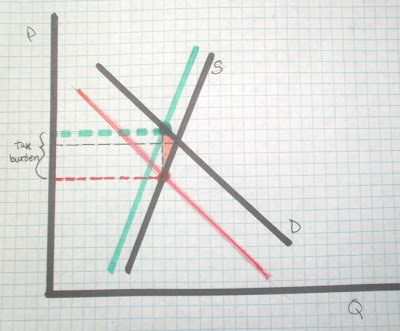 But the individual worker needs to get some job in order to have income, even if it’s not as much as desired. So the supply of workers is more inelastic. The more inelastic supply (S) line appears more toward vertical on the chart.
Now when you draw the black dotted line from the intersection point, to show the differences caused by the taxes, you can see the heavier burden is borne by the worker—whether you split it between employer and employee or have either one pay it in full. The tax (any tax, with a few exceptions that economics could point out, but we don’t need to) just naturally puts the greater burden on the worker.
Taxes on the employer hurt the employee more than the employer, and taxes on the employee hurt the employee more than the employer.
When there is a huge oversupply of labor—what we call high unemployment—is there any scenario in which higher taxes on either employer or worker can lead to employers hiring more? No.
The president has called for an additional tax of $500+ Billion, which he calls a Jobs Bill, intended, he says, to get people back to work. He is saying this tax will be “paid for” by the rich, those making over $200,000 a year—the small business owners and entrepreneurs in particular, who inhabit that range. If this tax makes it more difficult for the employers to hire (and taxes always do that), then it is guaranteed that this “Jobs Bill” will fail to decrease unemployment, and is likely to cause unemployment to rise.
The concepts above are not controversial; they are from a basic economics textbook. The president’s advisors have, we assume, covered basic economics. So there must be some reason other than encouraging job creation for adding to the tax burden. We can speculate on the reasons—most of them ideological and/or political, but not common-sense logical. Whatever the reasons, they are certainly not intended to decrease the burden on American workers.
Posted by Spherical Model at 2:06 PM