This is Labor Day, so I could talk about the anomaly that in the past month there was zero movement in unemployment. Kind of odd. But I’d rather go ahead with a number crunching piece I’ve been mulling over for several days.


Last Tuesday I got one of those posts, you know the kind, meant to put me—and those who believe in economic and political freedom—in our place.
The provocative headline read:
3 Reality-Based Charts Your Right-Wing Relatives Will Have a Hard Time Ignoring
Here are some reality-based charts to help knock down absurd right-wing propaganda about the economy.
August 29, 2011 |
Problem: Your right-wing brother-in-law is plugged into the FOX-Limbaugh lie machine, and keeps sending you emails about "Obama spending" and "Obama deficits" and how the "Stimulus" just made things worse.
Solution: Here are three "reality-based" charts to send to him. These charts show what actually happened.
To my knowledge I do not send annoying political emails to anyone that would be irritating to them. Not to relatives or friends. But I do have this blog as a forum. Using it to refute this bait is normally not worth the effort. But since they claimed to use government data that was easily available, I was curious enough to run the numbers.
You can read their full diatribe here, along with all three charts. The piece says they got info from the government budget office, so, with help from my son Economic Sphere, who does this kind of research more regularly, I checked the facts (here, we used pp 54-56 of Table 3.1--Outlays by Superfunction and Function: 1940-2016). 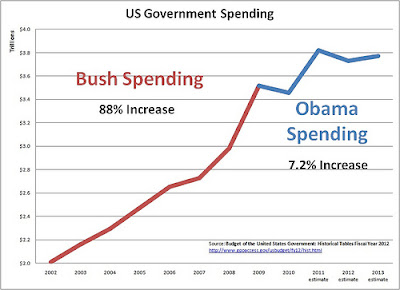 Today we’ll deal with the first chart, US Government Spending, which contains, as you’d expect, both some inaccuracies and some distortions.
Here’s a rule of thumb to start with: if liberals are making a claim that their liberal hero is spending less than his “conservative” arch-nemesis, you can be pretty certain the claims are wrong—because liberals don’t value lower spending by government.
To be clear, budgets originate in the House, are amended and agreed to in the Senate, and then sent to the President for signature; while the President can guide and suggest, his budget is really the House budget, with as much influence by him as he could politically muster, but is not technically his budget. Budgets from 2006 on, therefore, are spending set by the Democrat-controlled House and Democrat-controlled Senate. But for the sake of this chart, we will call them Bush or Obama budgets, since they presided over them. And there are some way-beyond-budget spending outlays we’ll deal with as well.