A couple of evenings ago I went to learn about signing up to be a poll watcher again for November’s election. I did it last year. has kind of been ground zero for attacking the voter fraud issue. But it’s expanding to a state near you, so I thought maybe you’d like to know what’s going on.


A couple of years ago, 2009, some friends in met in a pub, complaining as they had often done, about the direction their beloved country was going. But this time it was no longer enough just to commiserate. This coincided with the rise of the Tea Parties and 9/12 groups, which was good. But this small group wanted to do more to take action.
King Street Patriots was born. The name comes from , a historic location in . The Boston Massacre took place there; the original Tea Partiers crossed it to get to . So it has historic meaning, outside either party, and historic to all of instead of a single locale. 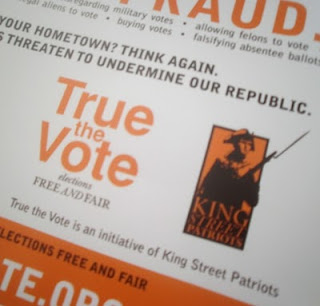 One of the projects that came out of this group of self-proclaimed patriots was True the Vote, an effort to bring about free and fair elections. That first year there were only a dozen people in (where is located). They worked hard and learned a lot. They studied voting law, and learned what they could do. At any polling place it is expected there will be a presiding judge, an alternate judge, and a clerk or two or three to check in voters and verify their ID. And there can be poll watchers, nonpartisan observers there simply to observe and report what happens. Think Jimmy Carter in , but not famous, just volunteer citizens at every polling place.
So these 12 people covered (incompletely, to say the least) the 835 polling places in that first year, for an off-year election. Most of the violations they observed were small but common, things like failing to ask for ID, officials accompanying people to the voting booth (allowable under certain conditions) and telling voters who to vote for (never allowed), sometimes setting it up for them (touching the machine is never allowed) and telling the voter to push the button.
Much of the time conscientious volunteer poll workers were willing to follow the rules but were inadequately trained. ’s True the Vote project has helped recruit and educate presiding judges and alternate judges as well since then.
Last year, when I learned about it and stepped up to be trained, there were 700 or so volunteers, which is a good step up from a dozen, but not enough to put a team (at least two, to avoid the problem of “your word against mine”) in each in the 835 locations. We’re handling an off-year election this year, which is good practice and preparation. Then next year KSP is hoping the have 3000 volunteers in . The not-big-enough crew, however, uncovered 750 documented election irregularities, and were able to turn over the evidence and testimony to authorities—something that usually doesn’t exist, which is why prosecuting voter fraud is so difficult.
This is not just a local story. True the Vote has trained people across and in 25 other states. Anyone interested can go to the website, TruetheVote.org, and see if there is something going on in your area. You can get training online, which may not be adequate, but it’s a good start, in a good year to practice—so that next year, when it is more critical, we have a chance to ensure free and fair elections. There will be at least ten two-hour training sessions starting Wednesday, September 28, and October. The training is free. Allow yourself two hours to see if this is something you can do.
One of the efforts of True the Vote has been to clean up voter rolls. Last year they uncovered a plot in to load voter rolls with fraudulent registrations. There were some 25,000 new registrations for only 7,000 actual voters. A “community organization” called Houston Votes was charged with voter registration fraud—entirely because of the work done by True the Vote. They requested voter rolls, public information, and tediously went through them, documenting patterns that looked wrong, and followed up with authorities.
They have a third attack, through the legislature. Following up after what they uncovered last year, they were able to lobby for legislative change in this year’s legislative session. Of the 22 points they advanced, 18 were made into bills; 6 were penned into law. One of these bills was that, if a presiding judge wants a peace officer at the polling place, that must be a licensed peace officer, not a group like the Black Panthers, the group who showed up at polling placed and thuggishly intimidated and physically threatened any volunteer they didn’t want there—and they accused the innocent volunteers of disturbing the peace. And then they lied to police about what had happened, making it impossible for the actual police to allow for free and fair elections.
There have been numerous lawsuits against KSP and True the Vote volunteers. There are attacks going on now. But, because of the excellent training, and the discipline of the volunteers, every accusation is always dismissed for lack of evidence. Training makes a big difference. And it is becoming more obvious that the opponents are against free and fair elections—and against any civic-minded volunteers who step up to make them happen.
I’d like to tell some of the adventure stories from last November. Andrew Breitbart recorded many of them. I had a little adventure myself, although not of the level worth video, but still maybe worth telling. I think I’ll save that for another day.
For now, let me just make this point: being there and watching is likely to make someone think twice before acting against the law. Being there means we will probably see nothing or very little done wrong. And that is the outcome we want. Good old boring adherence to law—don’t you love it!
Posted by Spherical Model at 11:19 AM