Back in the late 1700s there were two revolutions that continue to affect world history: the American Revolution (1776+) and the French Revolution (1789+). 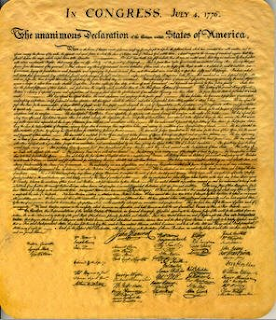 The American Revolution was amazing in a number of ways: the philosophy was civilizing. Rights come not from the state or ruler, but from God—to all human beings, who are naturally born free. These God-given rights can be summarized simply as related to life, liberty, and property. American Revolutionaries believed in the rule of law, as they believed in God’s law, which required personal accountability. The founding document outlining the philosophy is the Declaration of Independence, which was later codified into basic law in our Constitution, with the Bill of Rights.
The war came about after all avenues of appealing to law had been rejected. Separation from the ruling power became necessary only after every other course was explored. The reasons—the abuses of power—are laid out in the Declaration. 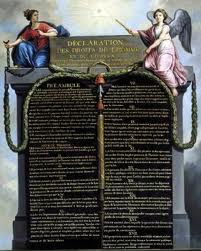 The French Revolution, only a few years later, also had a revolutionary document: The Declaration of the Rights of Man and of the Citizen. This document also claimed the natural, inborn rights of man to life, liberty, and property. But there was one all-important difference. The French version did not claim the rights came from God—rights just were. (But they applied only to free men, not slaves or women, for some reason.) The French Revolution coincided with a philosophical atheism totally opposite of the American Revolution. The French declared that God was dead and held a funeral, burying an empty casket with a wreath on top that read “reason.”
How do Godless people compare to God-fearing people in a revolution?  The Americans held a tea party: revolutionaries dressed up as natives in a haphazard disguise, and then took the tea they were being unjustly taxed for and threw the cases into the bay. They had a liberty tree where they met and discussed plans. They fought a war against the invading British forces. Following Shay’s Rebellion—the slightest wind of chaos—the early Americans sent representatives to the Constitutional Convention and drew up the Constitution. The Constitution has undergone only a few changes and still stands. When we celebrated 200 years, we flew the flag, and got souvenir copies of the Declaration of Independence and little replicas of the Statue of Liberty.
The French stormed the Bastille, beheaded men, women, and children of the ruling class. They killed, maimed, dismembered dead bodies, playing with the body parts, put heads on poles, and even degenerated into cannibalism. They are on their fourth iteration since the revolution. After 200 years, the souvenirs were tiny guillotines. They tried to do away with the family, considering it a conflicting loyalty, and assigned people to groups of ten, as a substitute.
But when the world looks to those historical examples, revolutionaries tend to miss the American example and instead pattern their fight after the French Revolution.
There is a cycle of tyranny: The tyranny becomes intolerable, and leads to anarchy (mob rule), which leads competing groups, which get weeded out to a new tyranny.
In the Spherical Model, we have a way to look at this. The tyranny cycle is all southern hemisphere. State control is on the eastern side; anarchy is on the western side. Both are intolerable, but people who can’t envision the northern direction see no alternative but to switch between these two lower quarter spheres.
It is a practice of would-be dictators to foment revolutionary anarchy and then gather supporters by promising to quell the chaos, and then work their way to the power position of next tyrant. It is the Marxist plan. Lenin used it; Stalin used it. It has been used repeatedly in South American revolutions. It is the Saul Alinsky pattern from the 1960s. It is the pattern of the Cambodian Killing Fields of the 1980s.
It is the pattern followed by power seekers everywhere.
Freedom seekers don’t stay down in the southern hemisphere. Freedom seekers move northward—a civilizing direction. Government has a specific and limited purpose. Rights are granted by God to every human being. Those rights must be protected by government, but must go hand-in-hand with personal responsibility. The behavior required is spelled out in the Ten Commandments. And the family, as the basic unit of society, is the vehicle for passing on the social, political, and economic truths from one generation to the next.
We are extraordinarily fortunate that our founders moved northward, instead of the almost universal practice of framing power and rights only in the southern hemisphere paradigm of chaos and control.
The contrast between the American and French revolutions continues today. We need to remember what it takes to stay in that rare northern freedom zone (or get back up to it): trust in God who gave us our rights, obey God’s law, and stand up against the enemies of freedom, using peaceful, lawful means as long as the law exists.
My thanks to Charles Krauthammer for reminding me of that contrast in his speech last week, which I referenced recently. He said this:
Compare the American Revolution and its prudential institution building, with the near contemporaneous French Revolution, which was the apotheosis of political romanticism, with its worship of reason and abstraction. It is no accident that is on its fifth republic, and we are on our first.
That reminded me of the class I attended in August, on the culture wars, taught by Brett Latimer (referenced here, with many more details than I have managed to present so far), in which he contrasted these two revolutions.
Posted by Spherical Model at 11:39 AM