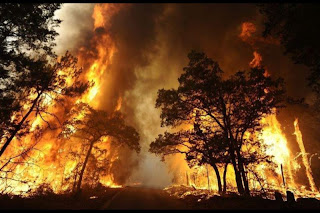 is on fire. We’re what we like to think of as used to disasters. Usually they’re water and wind related: hurricanes, tornadoes, floods. But we’ve been having a drought for many months, and that means something we’re not used to.


Here at the Spherical Model household we feel fairly safe in a neighborhood not right next to any forest. The fires grabbed our attention a week ago when a wildfire started in a reservoir about four miles down the road (across a couple of wide roads and didn’t reach subdivisions nearby). Usually this reservoir has water, or recently had water, or will fill up again any day. It’s land set aside never to be built, so that when the heavy rains come, as they commonly do here, we have a quick runoff place. Some of it is just forest primeval, and some is used as park land. Back when the boys played league baseball, we missed a few games a year because the fields were underwater.
So when areas that are used to water and are full of undergrowth have a long dry season, there’s a lot of dry fuel. Combine that with a populous that isn’t used to needing to worry about flicking a cigarette out a car window or causing an engine spark, and add in the dry winds, which were the tailings we got from Tropical Storm Lee, and we get wildfires like this area hasn’t seen since the 1950s.
In more rural areas the wildfires have been much more severe than our immediate area. Entire counties have been evacuated. Hundred, possibly thousands, of homes have been lost.
I do not think we, as a people, are being punished for general wickedness. Far from it. One thing I believe about disasters in this area is that they bring out the desire to help one another. Facebook and emails have kept me somewhat apprised. Below are (slightly redacted for privacy’s sake) posts I saw from facebook friends and email lists.
“We had to evacuate last night…. My husband and father-in-law are doing some recon right now to see what’s going on. We are staying with friend, and thank God for good friends!  We took our two dogs and two kitties, but had to leave our chickens. :-(
“We can smell smoke here, but it appears we are out of danger right now. If there is someone/family needing shelter, please call. We will gladly help.”
“Hey you! I am headed out in the AM to take supplies to the firefighters… wanna join forces?”
“The high school has enough donations. They are asking people to take bottled water, Gatorade and snacks for the firefighters to the fire station…”
“I you need safe pasture for your horses due to wildfires in , call Mr. M- D- at (phone number). He has pasture to shelter 60 horses and has trucks and trailers ready to go. He can move 10 horses at a time. Please repost.”
“M- West Command Center is in need of LARGE ice chests or an upright freezer! Ice is melting!”
“ is in need of lunch meat and deli sliced cheese. We do NOT need bread. Deliver all donations to the Fire Department on .”
“I found this website that shows active fires in and U.S. Thought it might help someone looking for a visual.  http://www.wunderground.com/wundermap/?lat=31.48489
<http://www.wunderground.com/wundermap/?lat=31.48489&lon=-100.41504&zoom=6&t "
“This may be a repeat post, but I found this site which has a lot of useful links and info related to the wildfires, including maps, advisories, daily situation reports, what to do, etc.: http://texashelp.tamu.edu/004-natural/fires.php " 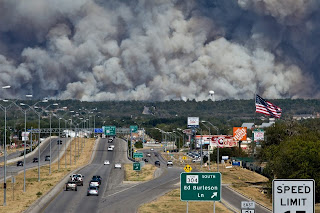 I did indeed check those links. Several times. Another positive source was one of the local news channels (probably all of them, but I saw this online). More video keeps appearing, but this one (http://www.click2houston.com/video/29100810/index.html ) talks about what’s happening with the evacuees. And they recognize people coming to help. A mother, along with her kids who were out of school because of the evacuations, showed up at the shelter so she could teach her kids how to serve. They gave food and water to first responders, and just looked for ways to be useful.
The drought started a chain of wildfires late last year, mostly in . Governor Perry had asked for a disaster declaration, to get aid, but that went to deaf ears for several months. If I’m remembering right, fires were popping up in April near the time we drove through , and no disaster declaration was yet forthcoming. But that has happened since then. Resources are being provided. And there does seem to be a fair amount of cooperation between local citizens, volunteer help, trained first responders, and government disaster response teams.
I saw one brief article (http://montgomerycountypolicereporter.com/?p=31987) expressing concern about federal interference, or pulling rank. It may just be a lot of people under severe pressure trying to do what they think needs to be done.
In the aftermath, I trust that what we’ll see is a lot of people in various stages of grief, who are nevertheless grateful for those who ran to their aid in their time of need. And until then, people everywhere are praying for rain.
* The photos are all from the Texas Storm Chasers facebook page.
Posted by Spherical Model at 10:00 AM