Harry Potter Comes to an End

One of the things about doing a blog on the interrelationships of things political, economic, and social is that almost anything I’m interested in fits somehow. So today I’m going to talk about Harry Potter. 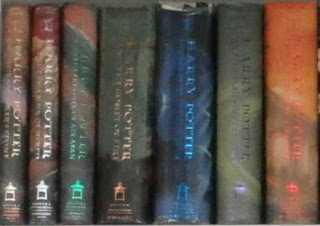 Our family got interested in the books when there were only three. (The third book, Prisoner of Azkaban, continues to be my favorite. The clues fit together for me in the middle of the night one night, and I woke up saying—Lupin is a werewolf! And I felt like a great detective.) So it has been a long wait both for the end of the book series and the end of the movie series. We went as a family on Saturday (in the morning, no wait, no crowds, very pleasant experience). Being in the magical world for a while has always been worth doing.
I’ve talked before about the purpose of fantasy fiction—to give us the opportunity to understand something about our world, by allowing us to step back and see similarities when looking at a different world. The Harry Potter series has never been about promoting witchcraft or the occult; it has been about identifying good vs. evil, and seeing very clearly what it means to choose good. That was very evident in this film version of the last half of the last book.
Even in this dark moment in magical world history, the characters retained a sense of humor, as well as a sense of who they are as people. I cried when Fred died, because I sensed the loss that his family felt, surrounding him. We knew they loved him, because we’d seen that family for the past decade or so.
I cried again when Snape died. Of course I knew the story; Dumbledore’s trust of him over so many books, even when there was ample evidence that he was evil, told us there was more we needed to know. That is something worth knowing in our world. Sometimes (usually) when a person seems to be evil, it is because they are choosing to do evil things—because they are evil. But sometimes, as with Snape, they are doing apparently evil things for a righteous purpose. There was challenge enough for the character Snape to do what he did. But the real challenge in the series was for everyone else not to hate him, but to be open to the possibility of goodness within him.
One of my favorite characters was Neville Longbottom. In the first book he seemed mostly just an awkward background character. In book three it looked possible that he might be to Harry what Peter Pettigrew had been to Harry’s father, James. But over time we learned more and more of Neville’s inner power. In the first book, despite his general ineffectuality, Dumbledore honored him for having stood up to his friends when he thought they were doing wrong. In book 4 we learn of his ability in herbology, which helps Harry at a crucial moment. It was also in that book that we learn of his ability to dance—one of the most touching moments of that movie. In book 5 we learn about what had been done to his parents, and the resolve he carries with him as a result. What a joy in this last movie to see him save humanity at a crucial moment by killing Voldemort’s snake—at the very moment it was about to strike Hermione and Ron. Next to Harry, Neville’s contribution was perhaps most heroic. (And if you’ll recall, the original prophecy could have been either Harry or Neville—so apparently they were both destined for heroics all along.)
Sometimes in movies when evil is portrayed, it is so over-the-top that we can’t relate to it or see it in our own world. Voldemort was that evil—even physically altered to no longer be quite human. He murders casually, or with relish, whatever suits. So it might be easy to dismiss his evil as irrelevant to us. But I think it isn’t.
Last week Glenn Beck had a photo essay of his trip to , to a concentration camp there. It was a powerful reminder that such evil did indeed exist—savagery among what had been an apparently civilized people. Last year when I read the Bonhoeffer biography (by Eric Metaxas—definitely worth reading), I had some of those same reminders. In fact, there were details in that book about the savagery that went on that I had never been aware of before. I had been aware of overwhelming evil in those times and places. But I hadn’t been able to imagine the extent of it or many of the details.
Most of the time, the evil we face will be less imaginative. It will be selfishness and inconsiderateness, and lack of bravery in standing up against something we know is wrong. It will be disappointing human weakness, often at the interpersonal level, within families, or, even more likely, at work situations where some people try to wield little tyrannies over others.
Learning how to stand up against evil, even when it’s much smaller in our world, is something we can learn by spending a bit of entertainment time in Harry Potter’s world. I’m glad so many of us have had that cultural experience together.
Posted by Spherical Model at 12:12 PM