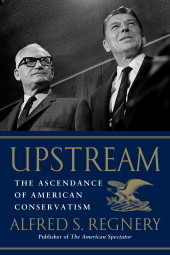 Several years ago I came across a book that reinforced and guided my studies. I actually started keeping a record of my reading following this book, back in 2008. Over a hundred books later, I continue to be uplifted by the positive attitude of this book. It is Upstream: The Ascendance of American Conservatism, by Alfred S. Regnery, son of Henry Regnery, one of the founders of Regnery Press, publisher of a long list of very fine conservative books, as well as The American Spectator.