Remembering the Armistice and the Veterans

I put out the flag earlier today, in honor of Veterans Day. But a storm blew in—with heavy wind, and heavy rains to come. I moved the flag to the window near the front door. It’s a balance of finding a way to honor those who would not be deterred by a storm, but still not allowing the symbol of our nation to be dishonored by neglect. So—indoors for the rest of the day.

Veterans Day, called Armistice Day until the 1950s, originally celebrated the end of WWI, but has since grown to include all those who have served the cause of freedom in the military.

The armistice—or ceasefire—was signed at 11:00 AM on the 11th day of the 11th month. So we always celebrate the date, rather than make the nearest Monday the holiday. Today just happens to be a Monday. I wrote in more detail on this last year, when it was the 100th anniversary.

I’ve written before about some of the veterans in my family—including my dad,  my son, and my grandfather. This weekend I got a note from FamilySearch.org[i] letting me know I had some WWII veterans in my family tree. So I followed the link. The first was my uncle, my dad’s older brother, whom I recognized. But there were many others also, mostly cousins of either my parents or grandparents. It’s a heritage worth noting on a celebration day. 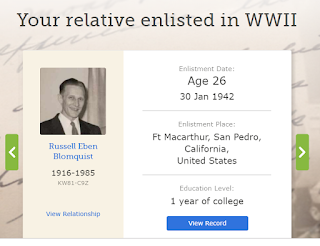 Others have been honoring veterans in their families as well. One friend shared a story from a grandfather, sharing his memories of the day of the WWI Armistice. Since this is the story of the day’s origin, I thought it was worth sharing. The story is told by Darvil Burns McBride.

Only six years old when the war started, I do not remember much of its early years. I do have memories of the much talk of it, little of which I understood, and of the starving people in Europe where the war had devastated countries. I remember food drives and the women sewing clothes for the needy of those countries, especially for the little Country of Belgium. Dad, being sheriff, knew when the troops would be coming through the county. He would take us to the Safford Depot to see them arrive in the freight trains, which often made a short stop of slowly crept through the town on their way for departure to war. I still see their young—and it seemed to Mother—hungry faces, as they crowded near and peered from the open doors of boxcars. Others, in good weather, would ride on open flatcars, as many as could, sitting along the edge with legs draped over the side. The rest sat and lounged among the stacks of equipment and gear scattered helter-skelter over the cars’ rough beds. 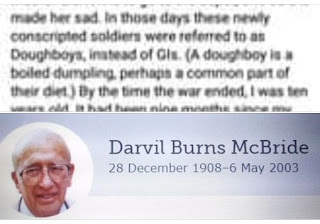 Mother didn’t like to go to the depot; she said it made her sad. In those days these newly conscripted soldiers were referred to as Doughboys, instead of GIs. (A doughboy is a boiled dumpling, perhaps a common part of their diet.) By the time the war ended, I was ten years old. It had been nine months since my father had been taken from us, and we were then living in Thatcher [Arizona]. How vividly I remember that momentous day of November 11, 1918. School had let out for lunch hour. Eight of ten of us kids were walking west from the school, which would put me at my house in another three minutes. We had just overtaken one of the lady schoolteachers, Daisy Curtis, my fourth grade teacher. At that moment, I spied W. W. Pace, a stalwart of the town, and at that time possibly the chairman of the school board. As we approached him he stopped in the middle of the sidewalk, held up both arms for us to stop and excitedly said something to the effect, “I have an important message for you. I was in hopes I could get to the school before you were let out for lunch. School is canceled for the rest of the day—the war had ended! We received the news just a few minutes ago. Germany has surrendered.” The town went crazy.
A shout went up from our little group. I saw Miss Curtis dabbed a handkerchief to her eyes and bowed her head in silence. Since we were on Main Street, the town center less than a couple of blocks away, I became conscious of noise and a babble of voices as others received the news. They came out of their houses and hugged neighbors. Grabbing hold of the excitement, I forgot my friends and raced for home, where I blurted out the news to my mother, who held little Frankie in her arms. Wondering about the racket outside, she’d just stepped out onto the porch. In another ten minutes, the street had filled with shouting, dancing, laughing and crying people. Vehicles of all description appeared. Cars, buggies, bicycles tricycles, men on horseback: the din unbelievable. Anything men and women could find with which to make noise came out of storage that day. Dishpans and washtubs all took a beating, and in the middle of the banging, tooting and hollering, the school and church bells began to ring, and lie a famous America poet has said, “While high overhead with wild increase, the great bell swung as never before, seemed as if ‘twould never cease. And every word it ardor flung, from off its jubilant iron tongue, was War! War! War!” But our bells were saying, “It’s over! Peace! Peace! Peace!”
I ran down to the corner where the largest crowd had gathered. There, Don Pace had just arrived with two large cowbells, and with one in each hand he succeeded in doubling the bedlam. For the rest of the day, and for many, far into the night—happy, exuberant, unrestrained people went crazy.
The Armistice had been signed that day during the 11th minute past 11 o’clock, the 11th day of the 11th month of the year.
Some moments, and some people, are worth remembering on into a second century. Those who defend our sacred liberty deserve this annual moment of remembrance—and more.
[i] FamilySearch.org is a genealogy website open to the public at no cost. It is provided by The Church of Jesus Christ of Latter-day Saints, who have always been interested in family history for religious reasons. Collaborating with the public helps with the Church’s interests while also serving anyone interested in their family history. Living people will not appear, unless you are the person to input that information into your own family tree for your viewing only. Also, only Church members may use the information for religious purposes for their own relatives; and for anyone deceased under 100 years, permission must be granted by the closest living relative.

Posted by Spherical Model at 9:44 PM