One of the principles of the Spherical Model is that you handle economic needs through a combination of free market and philanthropy.

A friend told me once about her experience as a missionary in socialist Denmark. Her assignment was to help the women’s organization figure out how to serve each other and the community. But when they would meet, every time the women came up with an idea, their first step was, “And we can apply to the government for a grant to do this.” It didn’t seem to occur to them that they could use their own resources. People had forgotten their own power to do good.

So I’m always pleased to find examples of people working to solve problems themselves, instead of saying, “How can we make government solve this problem?”

Remember, as we say here,

Whenever government attempts something beyond the proper role of government (protection of life, liberty, and property), it causes unintended consequences—usually exactly opposite to the stated goals of the interference.
People really can solve problems better than government can solve their problems. And this is true worldwide.

This week in book club we talked about the book The Promise of a Pencil: How an Ordinary Person Can Create Extraordinary Change, by Adam Braun. This young entrepreneur, only now in his mid-30s, began his project with $25 when he was not yet 25 years old. 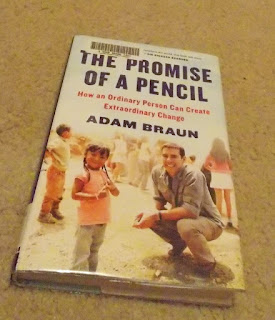 Braun was trained in finance and started his career at Bain. But his heart was connected to a dream—maybe an obsession. He says, in the book’s subtitle, that he’s an ordinary person, but he probably doesn’t qualify; he's probably extraordinary.

The book is set up to take us through the story behind his “for-purpose” organization (a term he adopts, because “nonprofit” doesn’t pack enough power) that builds schools in impoverished parts of the world.

The first location was Laos. Later he expanded to Guatemala, Nicaragua, and Ghana. To date Pencils of Promise has built 457 schools for 86,021 students. They also do teacher training now, and water and health programs.


The reason for the pencil comes from a question he asked. He was doing a Semester at Sea, traveling around the world. He didn’t want to collect trinkets as souvenirs. So he decided to collect answers from children. He would ask one child per country, “If you could have anything in the world, what would you want most?” He expected answers to be fancy things you can buy: a flat-screen TV, an iPod, or a fast car. But children didn’t answer that way. One young girl in Hawaii said, “To dance.” In Beijing a girl answered “A book.” This girl loved school, but didn’t own any books of her own. Another child answered, “Magic.” Yet another wanted his mother to regain her health.

In India, he asked a boy his usual question, and the boy said,

“A pencil.”
“Are you sure?” I asked. He had no family, nothing, yet his request was so basic.
More men came over and started chiming in. They prodded him, “You can have anything. He might give it to you!”
The boy remained constant with his wish: “A pencil.”
I had a No. 2 yellow pencil in my backpack. I pulled it out and handed it to him.
As it passed from my hand to his, his face lit up. He looked at it as if it were a diamond (p. 35).
The boy had never been to school, but he knew that children in schools learned to write, and they used pencils. What he wanted most was to go to school. It was the way to “unlock potential.”
So the pencil became a symbol—the beginning of learning, the portal to possibility.

Braun began carrying pencils with him, to give away to children, in various other countries.

He thought for a while—and his parents advised—that he would work hard, make plenty of money for a couple of decades, and then use that to eventually make a difference. But the dream to build a school kept eating at him. He started out doing fundraising to build a single school. Then he created an internship to work at his own nonprofit. And then he dove in full time to the nonprofit, and learned, a lesson or two at a time, to make it successful.

In the book, each chapter heading is a mantra—or, rather, a principle statement about how to be successful in accomplishing whatever it is you dream of doing. These are things like, “Why Be Normal,” “Get Out of Your Comfort Zone,” “Big Dreams Start with Small, Unreasonable Acts,” and “Practice Humility over Hubris.” It’s his story of building Pencils of Promise, over several years, bringing in friends and family along the way. And bringing in timely contributions from just the right people.

I especially liked the chapter, “Change Your Words to Change Your Worth.” In that chapter he realizes that, when he’s talking to businessmen, they start to tune out when he says he’s involved in a nonprofit. They’re about profits, so being against what they’re for is a disconnect. The realization changed how he did things. He realized it wasn’t lack of profit he was focused on; he was focused on a purpose. So he started using the term “for purpose.”

And then he started running things less like an ad hoc volunteer place and more like a business. Even volunteers who weren’t productive were “fired,” and replaced with committed producers. I don’t know if the phrase “for purpose” will catch on, but it is a better description of many enterprises, maybe even some “for profit” ones.

A lot goes right in Adam Braun’s story. While the mantras try to make it look like anyone could do this, it probably also required a young man with a sense of mission and an endless amount of optimism and faith, which all coincided with much fortuitous, well-timed help. It’s almost as though God wanted this enterprise to succeed.

Among the things I especially like were that this was all done without asking for government handouts. There had to be some working with various governments. And some cases the governments had a budget for teachers but not for building schools, so once Pencils of Promise put a school in place, education got underway.

But it is more than just rich people from rich nations dropping in to do something good and then dropping out. They got buy-in from the people in those poor local areas by having them make an investment. For people who only earned a dollar a day, they couldn’t contribute money. But sometimes they could contribute wood or stone that they gathered and carried to the building site. And sometimes they contributed their time in the construction. It was important that they showed they really wanted the school.

The partnerships were built ahead of choosing the building sites. The communities had to be ready, and show their willingness, before they were chosen as a building site. It was also important to have local management making things happen.

I prefer organizations that put all their donations into doing the good—rather than into overhead. Pencils with Promise operated on very low overhead the first few years. Still, they considered they were doing great to have around 83% of donations go to the actual building of schools. Later, they found a way to do a single large gala to earn the annual operating budget, so that all those small donations intended for the educating children would go 100% to building schools—and later also to books, materials, uniforms, and teacher training.

It helped that the self-driven young man, who surrounded himself with other self-driven volunteers and workers, had a background in finance. He still had a lot to learn, but it wasn’t a random guy off the street with an idea; it was the right guy.

I hadn’t heard of Pencils of Promise before we decided to read the book. But I’m glad to know about it now, and see it continue to do well.

Still, good isn’t always done by large worldwide organizations. Sometimes a service-oriented person finds things that need doing very close to home, and just does them. My mother-in-law was one of those. There was no stopping her; she had to serve, as a way of life. It was tiring for some of us to watch. But it was a good life.

Living a life with purpose is probably always going to be a life well lived. Happier. More fulfilled. Extraordinary success is great, and sometimes certain big things require the extraordinary effort, like Pencils of Promise. But small philanthropy done by many people in many places close to home, is also an answer to solving the economic and social problems in our world.

Posted by Spherical Model at 10:54 PM