Econ Lesson from the South Seas

Today’s post is a combination book review and economics lesson. I just finished reading The Ambassador’s Son, by Homer Hickam. Hickam is the author of Rocket Boys, which became the movie October Sky, about a boy who grew up to be a rocket scientist, which was all I had known him for. The Ambassador’s Son is the second in a series, coming after The Keeper’s Son, following main character Josh Thurlow and his friends from home, off the coast of North Carolina. 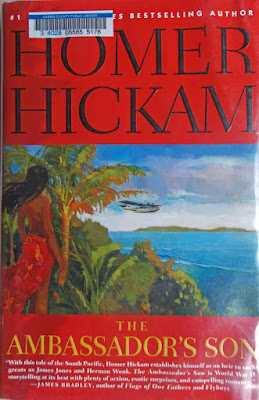 In this story, Josh Thurlow is a Coast Guard Captain stationed in the Solomon Islands during World War II. The timeline covers a couple of weeks shortly after the well-documented event of John F. Kennedy losing his PT boat, which was run over by a Japanese destroyer. When we meet him, Kennedy is waiting for court martial, frustrated and disillusioned with leadership who left him and his men without rescue but are fully ready to place blame.

Josh gets the assignment to hunt for a man who has disappeared and may have deserted. Thurlow has a Catalina, an amphibious plane, but he needs a ship to help with the mission. The injured and downtrodden Kennedy is the only option. And the ragtag crew ends up swiping a PT boat, since they can’t get one requisitioned or loaned to them. They alter it, get rid of the torpedo tubes, making it faster, and load it up with guns, turning it into a makeshift gunboat.

So, Kennedy is one of the main characters. Hickam adds a historical note at the end, somewhat tongue-in-cheek, that the future president’s story following the night of the PT-109 was previously unknown: “I am proud to reveal here for the first time the adventure that saw him north to Noa-Noa. I suspect it was very nearly the last time John F. Kennedy was truly a happy man.”

JFK is not the only historic person in the book. There’s a poker game, during the quest to obtain a boat, in which Kennedy plays against author James Michener (who gets his book ideas, offhandedly, from one of Thurlow’s crewmen), and Richard Nixon, called Nick, a wheeler-dealer requisitions officer of the Sergeant Bilko type.

Normally this sort of coincidence would doom a book, but Hickam gets away with it, and somehow makes us willing to just go with it to see what happens.

Josh gets left on an island to interrogate the man who claims the possible deserter has run off with his wife. The Japanese control parts of the island, and an island girl appears to help rescue Josh. Many of the story’s surprises relate to this girl, and I don’t want to spoil. But her sister, appearing on another island, at a plantation where Kennedy is recovering from a head injury, says,

“My sister is very beautiful and knows how to kill a man, if she has to.” Kennedy thought that was a comment one would not hear too often in Massachusetts regarding one’s sister (p. 283).
Eventually Josh is led to meet a chief named Joe Gimmee—who is the father of the girls, and a big power on the islands. Joe Gimmee is the source of our economics lessons. When they finally meet, Joe Gimmee asks Josh some puzzling questions. (I’m quoting a few pages from the novel, which makes this post long, but it’s easy reading):

It turns out a plane arrives. It is Nick (Richard Nixon), who has arranged to be there to trade whatever the islanders have made for various goods. He sells the souvenirs to the servicemen back on the island of Melagi.

After the exchange—which to Joe Gimmee looks like the gods did exactly what he prayed for—the chief asks for economics truth from Nixon, and gets a pretty good answer:

“It was good to do business with you, Joe,” Nixon said.
Joe replied “When I heard of you, I knew you were especially loved by the gods.”
“Oh, yes, indeed. They love me like a son.”
“I did as you asked,” Joe said. “I brought the people together with all the things they make.”
“Yes. Well, thank you.”
“And now I would ask you to do something for me.”
“Anything, Joe. You just name it.”
“You brought us treasure from the gods because we built this airfield. But others of my people have built airfields and nothing has come. And they have built docks with the same result. And they have built warehouses, yet they were not filled. What is the great secret? What do you do to get your treasure? Tell me, so that we may have treasure, too.”
Nixon gave it all a good think, then wiped the sweat from his face with a handkerchief produced from his hip pocket. “I think I see where you’re coming from, Joe. You just want a piece of the pie. Can’t blame you for that. If I were in your situation, here’s what I’d do. First thing, I’d study up. Education, that’s the ticket. Science, the arts, and economics. Lots on economics, Joe, you savvy? Then, I guess the next step would be to get control of your own affairs. Can’t do much when somebody else is running the show, now can you? My own country used to be owned and operated by the English, too, but we finally wised up and threw them out. Didn’t take us long after that before we were fat and happy. Lots of education and kick out the Johnny Bulls. That’s my advice.”
“Splendid!” Joe exclaimed. Then he faltered. “But how do we do that?”
Nixon gave it some more thought. “Education’s easy enough,” he concluded, patting his damp brow with his handkerchief. “To teach yourself, just start reading every book you can get your hands on. For the kids, start setting up schools, but make sure you hire the teachers and have them teach the importance of being free. Then you ought to form a political party and get ready to declare the Solomon Islands independent as soon as this war’s over.”
“Nick!” Kennedy blanched. “You’re talking about a revolution!”
Nixon shrugged. “Well, we did it back in 1776. Why can’t Joe and his folks?”
Joe grinned. “I should have known the great secret would be complex, but I promise to follow your advice” (pp. 314-315).
Joe Gimmee seems to miss the obvious: you make something, or offer a service, someone else wants and trade it for something you want. A lot else comes into it—figuring out what you can do that people value, figuring out supply and demand, getting resources, using time efficiently.
But wealth doesn’t just come down from the sky—or from the government. As we say at the Spherical Model,

Wealth is not some mystical entity endowed by either government or birthright. Nor is it something that the haves enjoy by depriving the have nots of their fair share. Wealth, simply, represents the accumulation of the results of labor.
What struck me as humorous is that economics lessons often use simple societies, like Robinson Crusoe’s island, to teach the basics. (See here, and here.) But in this story the islander hasn’t yet grasped the basics.

Maybe we could extrapolate, and notice that there are people in our own society that think about wealth in superstitious rather than truthful terms. Education—that’s the ticket. Lots of economics. And teachers that them the importance of being free. If it will work on an island, maybe it will work in America.
Posted by Spherical Model at 4:57 PM