Worse than We Imagined, Part II

This Snopes headline came to my attention:

Reading, Writing, and RuPaul
Reports of revised curriculum standards for Washington state led to false rumors claiming that schools there will be teaching "transgenderism" to Kindergarteners.
That relates to what I wrote in my last post, “Worse than We Imagined.” So I began to read, wondering if I had missed something and would need to write a retraction.

They claim that the Daily Caller article on Washington State Board of Education changes to standards to include teaching transgenderism to kindergarteners is “mostly false.”

The original Daily Caller article actually begins with this:

Washington State has released updated curriculum guidelines in 2016 that include directives regarding gender and gender expression.
So, Snopes agrees with the Daily Caller so far.

The Daily Caller article included the link to the .pdf file (which I also linked in Monday's post and above), and Snopes shows page 29, which is at issue—below. 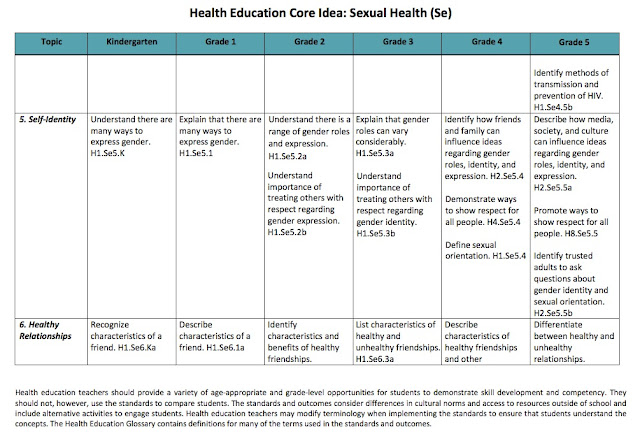 One point the Snopes piece makes is that the standards are not curriculum; curriculum and lesson plans decisions are made at the local school board level. But, to fact-check Snopes, that’s not entirely accurate.

It has been a long time since I worked as a curriculum writer. I worked in California, writing hi-low textbooks; that is, high interest level (middle school to high school) but low reading level (around second grade). I didn’t write for kindergarten, or even for elementary school. But I think some practices translate across grades.

I wrote mostly government and civics related books and workbooks. But one big project was a biology text (which I did not complete at that job). A publisher looks at who is most likely to buy. The biggest markets then, and probably still, were California and Texas. As a writer I referred to the California and Texas standards; they were different in significant ways. For a biology text, human reproduction had to be handled very differently for the two markets. A publisher might decide to aim for a California market or a Texas market, or might do separate versions, with different chapters for materials for which the standards were disparate.

It was unlikely that a publisher would do a special version of a text just to fit Washington State standards, or Utah standards, or Mississippi standards. The other states would look at what was available and choose from among the variety of available materials—which had been aimed mainly at the California or Texas markets. On the topic of transgenderism, Washington State would probably choose materials aimed at the California market.

Smaller niche marketers, often coming from interest groups, might provide supplemental materials on certain subject matters, and try to sell those to individual states or school districts. (We’ll talk about one of these below.)

In Texas the SBOE does not write curriculum; it reads it and deems it acceptable or not. Then local school districts can adopt what they choose. Local school board members, who are unpaid for their school board work and probably make a living elsewhere, are unlikely to read every text. They might have committees set up to do that. The committees might include community members and parents—or, more likely, they include only teachers and administrators. (I have known parents who volunteered for this work in Texas, because Texans are proactive that way.)

Parents who disapprove typically get involved after they see the chosen materials and then must work to get something inappropriate removed from their schools by going through a long and challenging process.

So, when the Daily Caller says that the standards changes, which clearly include talking about “gender expression” to kindergarteners, might be a way of teaching the LGBTQ agenda on transgenderism, that isn’t alarmism. It isn’t making things up. That is likely to happen across the state—unless parents become aware and speak loudly their disapproval.

The Daily Caller article was originally written in June 2016, shortly after the standards changes were announced and approved. The hope is to get enough attention so that parents can prevent implementation of things they do not want their children to be taught, so those materials will not be forced on them by fall 2017, which is now upon us.

This differs from their previous guidelines (which also include vocabulary not normally used by preschoolers): "I’m a woman—a girl who is all grown up—so I have a vulva instead of a penis. And you’re a boy, so you have a penis instead of a vulva."

Body parts don’t tell you anything anymore, they say. Because of new science? Of course not. Because they’re pushing an agenda. And they’re aiming it at our children. We can also assume they’re using taxpayer dollars to produce the indoctrination.

Will this new Planned Parenthood preschool material make its way into elementary schools in Washington State? I have no idea. But they meet the new state standards.

So, until the Washington State standards are changed back to something closer to sane reality, assume the standards changes likely means that confusing, biology-denying lies, along with immoral values, are going to be foisted upon your children—unless you stand up and refuse to let that happen to your children.
Posted by Spherical Model at 6:42 PM