Here at the Spherical Model, we have an alternative to right and left, which could help during these times when the terms right and left are being used in absurdly inaccurate ways.

Fascism isn’t right; it never was right by any traditional uses of the term. Fascism is coercion to follow the directives of the people in power. It is totalitarian—which, in the Spherical Model is far south into statist tyranny.


Nazism is fascist. And specifically it means national socialism—coerced enforcement in which the state decided what people can do with their lives and their money, and even their thoughts. It is, by definition, far south into statist tyranny.

Neo-Nazism is a fringe group of haters who think it’s a good idea to play like Hitler and pretend they can coerce enforcement of statist tyranny—assuming, no doubt, that the fringe will be the ones wielding the power. And this fringe today, like Hitler of old Nazism, tends to be white supremacist. They actually believe the greatest qualifier is not what they accomplish, what they think or invent, or how they treat people—but something they have absolutely no control over: the amount of melanin in their skin.

What is the Alt-Right, then? It isn’t “right”; it is deep south into tyranny. It is essentially Neo-Nazism. It has nothing to do with what could be construed as right or conservative. It has nothing to do with believing “all men are created equal,” or that God has endowed us with basic human rights including life, liberty, and property, which are best protected by limited government as spelled out in the US Constitution. The Alt-Right is white-supremacist—something conservatives in our country have never been and cannot be.

Ben Shapiro, in Monday’s podcast, spent a few minutes defining Alt-Right for us (from 7:30-9:30 in the video):

What is the Alt-Right? The Alt-Right is marching in the streets. And the Alt-Right is supposedly… There’s a lot of misperception. People on the left are calling everyone on the right Alt-Right, and saying everybody’s a Nazi. It’s absolute garbage, Ok. The Alt-Right is its own movement. The Alt-Right is a group of white supremacists who believe, essentially, that western civilization is an outgrowth of white race, and that threats to white race are a threat to western civilization. That’s the basic premise of the Alt-Right.
Ok, a lot of people think they’re Alt-Right now, because they like memes, or because they believe in the god of Kek. Kek is the meme-ry that you see on 4chan and Reddit. And a lot of people who think that if they post a frog, that makes them a member of the Alt-Right. That’s not what the Alt-Right is.
The Alt-Right has a basic root philosophy. What happened over time is that the Alt-Right was mainstreamed by a group of people that decided to broaden the definition to include people who liked frog memes. OK, they decided to broaden the definition. And they used that broadened definition in order to make the claim, basically, that they were a big movement that had a lot of support.
And then you saw people like Donald Trump and Steve Bannon—yes, the president of the United States; yes, his chief strategist—give legitimacy to the Alt-Right and refuse to condemn them in the middle of the campaign, which gave them added impetus. And now you see them marching openly in the streets.
So, was Charlottesville Trump’s fault? No, of course Charlottesville wasn’t Trump’s fault, any more than what happened in Dallas a year ago was Barack Obama’s fault, when a guy who believes a lot of the slogans of Black Lives Matter went out and shot a bunch of cops. You’re only responsible for violence if you are rhetorically calling for violence. Trump has never done that. What he is responsible for, in some degree, is mainstreaming the Alt-Right, and not treating them as a cancer to be excised from the conservative movement that they really are.
I had to look up that bit about Kek and meme-ry, because I’m not a millennial. I read about it here, and it is summarized in this meme. It’s not germane to the discussion from here on. 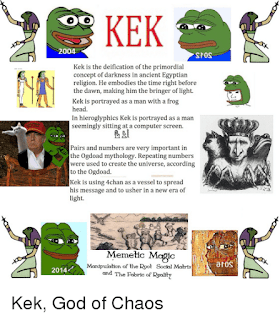 What happened last weekend in Charlottesville began with an Alt-Right protest. The movement is so small that only a very few locals would have participated; the thousand or so had to be brought together from all over the country to make enough to get media attention. Their purported purpose was to protest any movement toward removing Confederate war memorials.

Without media attention, this event—and, further, the movement—would end “not with a bang, but a whimper.”[i] Instead, the media has used this fringe movement to try to claim every Republican, every Trump voter, is a raving, bigoted imbecile, in a misguided “leftist” effort to unseat our duly elected president.

Just as we knew president Obama was a black socialist SJW (social justice warrior) who would try to impose control over free people where he could, and would have a knee-jerk reaction against police and non-blacks and actual conservatives at every opportunity. The solution is to argue truthfully and wait out the length of his administration.

There are people, however, who refuse to do that with Trump in the White House. And they are easily stirred up.

Stirred up people went to Charlottesville to give voice in opposition to the white-supremacist fringe. Some of this opposition were well-meaning, but among them was a violent group calling themselves Antifa, which is short for “anti-fascist.” Their beliefs are a disgusting soup of SJW fanaticism and radical communism. Ironically, Antifa’s methodology tends toward violent imposition of their particular beliefs.

What was the definition of fascist, again? Fascism is coercion to follow the directives of the people in power. Antifa is fascist, not anti-fascist. They’re labeling any ideas they oppose as fascist, but they are using fascist methods to enforce their views.

So, you allow a white-supremacist rally, lawfully exercising free speech, however distasteful. But you don’t also allow, in the same proximity, a violent fascist group that disagrees with that speech. At the very least, you keep these protest groups miles and miles apart, with a strong police force defending the lines they shall not cross.

That didn’t happen on Saturday. Both sides got violent. It looks like Antifa instigated the first violence. Then one lone wolf from among the Alt-Right upped the violence, using a vehicle as a deadly weapon, killing one woman and injuring several others.

Anyone, of any belief tribe, who uses violence to enforce their beliefs must be punished to the full extent of the law. That should happen for the killer, and also for any other violent demonstrators.

Both are ugly, savage, and tyrannical. Oscillating between one or another stripe of southern statist tyranny just ensures more tyranny, poverty, and savagery.

The way to freedom, prosperity, and civilization are known. We need people to choose the behaviors that get us there.

One heartening thing I saw was a story about a black man, Daryl Davis, who has spent decades befriending white supremacists. His question is, “How can you hate me when you don’t know me?” So he gives them a chance to know him, and they—on their own—give up their old beliefs.

I don’t know how he finds them. He’s a brave man. But I think he’s right: the way to get people to stop hating one another is to give them a chance to be treated like a friend by someone they have called an enemy. It sounds like a suggestion made in the Sermon on the Mount.