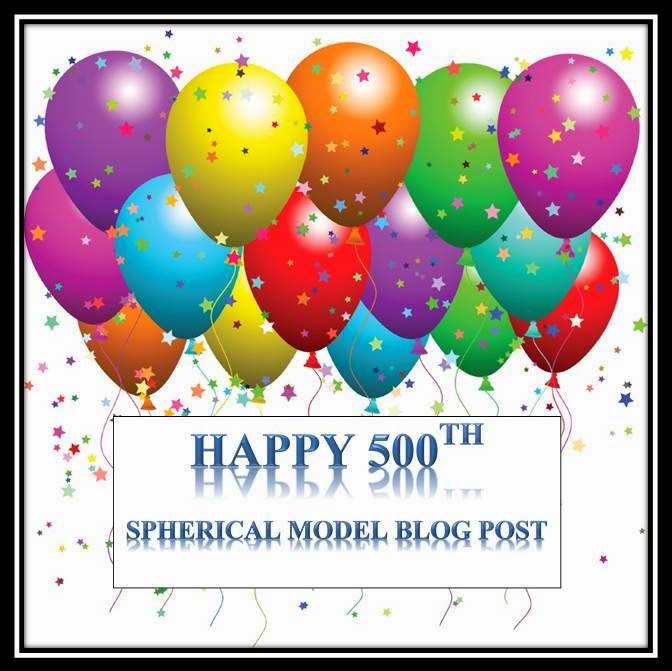 Today is the 500th post at the Spherical Model blog. Yay!!! (Balloons being dropped and confetti strewn as you read this. I can always vacuum later.)
It is also, coincidentally, approximately the 3rd anniversary of the blog; that was officially March 4th, but this 500th milestone seemed close enough, I thought I’d wait and do both at the same time. The website, SphericalModel.com, is a few months older and has changed little; I’ve used the blog to add to the basic ideas.
Milestones are a good time to explain what the Spherical Model is. So here goes—again.
The Spherical Model is a different way of looking at the political world—different from the usual right-wing/left-wing model. In addition, the political world interrelates with the economic and social worlds, so the Spherical Model handles more ideas than the simple right/left arrow.
It works like this: think of a sphere, with freedom in the northern hemisphere, and tyranny in the southern hemisphere, so north is good and south is bad. (This relates in no way to actual places on our earth.) What about east and west, you ask? Good question. There isn’t a good-half/bad-half thing going on with east and west. It’s about level of interest, from the smallest unit of society, the family (furthest west longitude line), moving eastward to town/city, state/province, region, nation, multi-national allies, and reaching global interests at the far eastern longitude line. The caveat is, you need to be as local as possible for whatever issue is being addressed, or else there is loss of freedom (and therefore movement southward).
So it’s possible for there to be global issues, but they’re rare. And we tend to see a lot of national or state levels trying to usurp decision-making authority from the appropriate lower levels. Theoretically we could see a lower level insisting it is the appropriate level when a higher level actually is for fitting, but that’s more rare. And when there is such a disagreement, that’s when debate on issues should show up.
Just as you have freedom north and tyranny south for the political sphere, you have corresponding good north and bad south for the economic sphere: free enterprise economy north, and controlled economy south—which translates to prosperity north and poverty south.
You also have corresponding good north and bad south for the social sphere: civilization north, and savagery south.
All of these spheres interrelate. In other words, if you don’t do what it takes to sustain civilization, you suffer a loss of prosperity and a loss of freedom. If you strengthen civilization, that leads to greater freedom and prosperity as well. If you centralize decisions about who controls the spending of earned wealth, you affect freedom and civilization. For example, if either government or marauding gangs confiscate wealth from those who have earned it and redistribute it to those who haven’t earned it, workers are discouraged, feel enslaved, and feel hopeless.
What is the value of using this slightly more complicated model? For one thing you totally get rid of the accusation of being extremist just for wanting freedom, prosperity, and a thriving civilization. And you get rid of the notion that compromising in the middle, maybe just slightly toward the right, is sensible and logical. Because it is never a good thing to move south, and it is always a good thing to move north.
It doesn’t matter if an ideology is called socialism, communism, tyranny, dictatorship, anarchy, oligarchy, monarchy, or theocracy. All of these can be floating around below the equator. Location depends on the level of control (gang, state, nation, region—as is Axis of Evil—or global), and how much control. The more control, the further toward tyranny.
We don’t need to argue about whether “progressivism” is socialism by another name; we just need to look at how appropriate the level of interest (west/east), and how controlling the power center is.
If you’re conservative, you probably already believe much of what you’ll read here. The purpose is to give you new ways to evaluate ideas, candidates, issues, and policies—based on principles that are consistent and knowable. We can encourage policymakers to ask, “Does it lead toward more freedom, ensuring our inalienable rights?” “Does it lead to prosperity by encouraging free enterprise?” and “Does it lead to more thriving civilization by encouraging adherence to long-known good behaviors of religious people, and valuing the family as the basic unit of civilization?”
If you’d like to get a clearer understanding of the Spherical Model, I hope you’ll check out these sources:
Long Version: The Spherical Model website—a collection of long pieces describing the model and the three spheres, about 50 pages worth of writings.
Short Version: Blog post March 5, 2012: Year Two Begins, written for the one-year anniversary of the blog.
Best of the Blog: Collected links of blog posts most likely to give you additional understanding, offered as a celebration of the 400th post, June 2013.


·         Part I covers the interrelationships of the three spheres, plus the Political Sphere.
·         Part II covers the Economic Sphere.
·         Part III covers the Social Sphere, or how to get to Civilization.
Special Topic Collections: These are additions to Best of the Blog, posts on specific issues that relate to the principles of going north on the sphere, but aren’t obviously related to a single sphere.
·         The Defense of Marriage Collection
·         The Education Collection
We’re a hundred posts beyond the Best of Blog collection. I hope there are now additional posts that should be favorites. They’re all available in the archives. I’m always honored whenever someone spends their time reading here. I hope you find the Spherical Model valuable in our joint efforts to have a world with more freedom, prosperity, and civilization.
Posted by Spherical Model at 12:33 PM