We’re getting closer to the end of presidential nomination process, so eventually it will stop being a distraction from a myriad of other things worth talking about. But last night I did follow  the election returns.


Romney was expected to win in New Hampshire, so the question was the margin. Some people were claiming anything under 36% would show weakness—even though historically no non-incumbent has won both Iowa and New Hampshire with any margin at all. As it turned out, he won with over 39% of the vote.
Ron Paul got a respectable 23%. This is the state where the voluntaryist project is going on (extreme libertarians, gathering together in one place to set up their own local version of free government, which unfortunately includes an insistence on legalization of all drugs). Paul has a strong following with the young, students, not yet making much money, possibly never voted before, who consider themselves moderate to very liberal. Most GOP primaries will not be carried by this demographic. Another day, though, I’d like to talk more about them, and the Overton Window principle, which is why I’m pleased these people are out there articulating their point of view.
Jon Huntsman had put everything he had into this state, and he won a respectable 17% of the vote, well above expectations, and well above the other non-Romneys.
On the usually reasonable conservative Mark Levin Show last night, Levin was suggesting what really needed to happen was a backroom meeting of the remaining opponents, where they make whatever deals are necessary to come to a consensus of who among them would continue on, to put the “real” conservative votes behind one non-Romney candidate. At that point in the evening, Romney was estimated at 36% of the vote, which Levin said was a pathetic showing (even though it would have beaten McCain last time around). But what I’m seeing is that if you exclude Paul (which Levin did, I believe), then you put together all the votes of Huntsman (17%), Gingrich (9%), Santorum (9%), and Perry (1%), you get 36%, actually 7,048 votes short of Romney’s votes. In other words, a backroom meeting to join together behind one candidate would still be insufficient.
But, of course, this is just New Hampshire, practically home turf for Romney. So maybe it would still be worth fighting Goliath? We’ll see, but polls show Romney leading in South Carolina (where Perry is putting his remaining energy), and Florida.
There’s something else. The chart below was put out in a memo by Andrea Saul, a Romney campaign spokesperson. I got it in this blog. 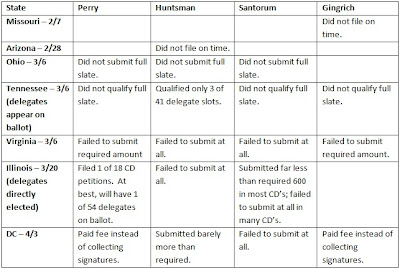 According to the chart, the non-Romneys have little chance of garnering the needed delegates, because they have not met ballot requirements. We’ve heard a fair amount about Virginia’s problems, where only Romney and Paul are on the ballot, and it seems unfair to onlookers. And yet, Romney and Paul campaigns were able to handle the detailed paperwork. I believe it is also true that Romney as a first-time candidate four years ago nevertheless met ballot challenges in every state. He handles details and does what it takes to get inconsequential roadblocks out of the way. There’s something to be said for that. (Same for Paul supporters, many of whom are new to politics, and yet passionate and humble enough to ask what needs to be done and then do whatever it takes.)
Is it establishment GOP that took care of these details? Not from what I can see, where my state's GOP-ers were much more likely to support Perry. Nor was Romney considered “establishment” last time around, yet he was nevertheless able to take care of the details. In fact, Romney did almost everything right last time around, except squelch the inexplicable hatred toward him from his opponents. (Huckabee, McCain, and Paul supporters coordinated in West Virginia to add up to more than Romney won in the first round, thwarting Romney’s momentum, eventually handing victory to McCain.)
When Romney saw he couldn’t win for himself, he put all of his energy into helping the party win, recognizing the danger Obama posed to the country. Romney continued, at his own expense (and often contributing his own money) supported conservative candidates for the sake of the party he thought would best conserve our nation. He didn’t continually run, as accused. In fact, he seriously went through the decision-making process about whether to run again, based on where he could best serve. But his willingness to support and help where he could was exactly the right thing to do to garner appreciation across the country—which equals winning approval from the establishment, apparently. Note that the things he did are almost the same things Sarah Palin did—speak in favor of candidates, help with their fundraising, continue articulating the conservative message.
Yes, we have been burned by the “establishment GOP” in the past—more than a time or two. But doing the right things should not disqualify a candidate. Nothing was automatic for Romney; it was a matter of consistently doing and saying exactly what we would want a leader to do and say.
So, while I would not be terribly distressed with a non-Romney candidate (actually, I’d have a hard time pushing myself to support Paul or Gingrich, but I see almost anyone who reads the constitution as better than Obama), I am comfortable with Romney as our candidate. My major concern has been the almost rabid anti-Romney sentiments people who are usually reasonable and conservative hold against him. I’ve been gathering things to say that might help these people feel better about what is looking more likely. But as I go through this exercise, I am finding that Romney needs little help from me. He’s going to be fine.
One example is his skill at communication. This article highlights his varsity skill as a debater. Debate coach Todd Graham describes one of the strategies Romney used to good effect in the two debates over the weekend:
There is a simple debating strategy when answering attacks: “Backward-step-pivot-forward.” First, put up a robust defense—defend your positions thoroughly (backward-step). And second, figure out how to turn your potential weakness into strength. In other words, start with defense and then attempt to make the same issue part of your offense (picot-forward).
He gives examples of Romney doing this, while his opponents get stuck on the backward defense step. Romney then appears more positive and in control, while the others, even when successfully defining their positions, do it with the negative tone of defense.
This opinion piece in the Wall Street Journal calls attention to Romney’s skill in these debates as well, particularly in the way he took on Stephanopoulos’s foolish attempt to trap him. Stephanopoulos not only failed to make conservatives as a whole look foolish, as was his goal, Romney called him on it in a way that revealed the attack so the average American could recognize it, and in a way that was without rancor. That was skill. And this debate skill is a bonus from a candidate who just happens to be superior for our country in every way compared to Obama.
In other words, how about we give up just feeling resigned with an inevitable Romney nomination, and instead consider rejoicing that he is our guy.
Posted by Spherical Model at 1:20 PM