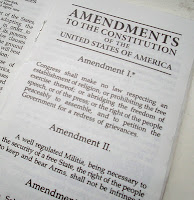 This is my 200th post at the Spherical Model blog. I had intended to celebrate by posting a short video explaining the Spherical Model concept. However, due mainly to my lack of technical skills, that is still in process. (My sons, Political Sphere and Economic Sphere, are encouraging me that this little project is doable in the near future.)


So, instead we’ll celebrate the unanimous ruling by the Supreme Court Wednesday in favor of religious liberty.
First, let’s do a little grammar practice. This is what the 1st Amendment to the Constitution says concerning religion:
Congress shall make no law respecting an establishment of religion, or prohibiting the free exercise thereof
There are two parts. So how would it read if we clarified by making each part its own sentence?
·         Congress shall make no law respecting an establishment of religion.
·         Congress shall make no law prohibiting the free exercise of religion.
It’s not really that difficult, grammatically. The second has been violated many times because of some twisted misunderstandings about the first. What would it mean for Congress to establish a religion? It would mean that they would make one particular religion (sect) the preferred religion—they would “establish” that religion as “the” official religion of the nation. Adherents to that particular faith would have preferred status under the law. Our founders didn’t prevent particular states from establishing their own state religion, and in the beginning several did indeed have state religions. But the Constitution prevented that from ever being done at the federal level. (And states figured out on their own it wasn’t a good idea at their level either.)
There is nothing about getting all religious expression out of public life. In fact, getting religious expression out of public life would indeed violate the second part; it would be prohibiting the free exercise of religion.
So what about non-believers, or different believers? They get to tolerate differences in religious beliefs, just like the rest of us. Simple, right?
The ruling this week was related to a particular issue, with a teacher at a parochial school who violated her contract with the church and then tried to get the courts to rule that the church didn’t have the right to terminate her because of her violation. The courts were unanimous in saying a church could decide who it hired based on their own religious criteria. It was somewhat technical; more info here.
But it was good to see the courts could be both clear and unanimous when the administration was lobbying against religious freedom. Let’s hope this is an indicator of more such clarity to come.
Posted by Spherical Model at 10:02 AM