﻿﻿﻿
At Spherical Model, some years ago, I wrote something about Ron Paul in the 2008 election being valuable because he brought something important to the conversation:
He reads the Constitution. More than most he insists that our economic system would function much better if we actually adhered to the Constitution. He would limit taxes to what is permissible in the Constitution. Up to this point, he sounds very much like a lone voice in the freedom zone.
This election cycle it’s totally natural to be reading the Constitution. All candidates must convince primary voters that they are Constitutional scholars and protectors. That wasn’t true last time around. So there has been a shift.
Have you heard of the Overton Window? It’s a way of describing shift in public opinion on any policy. [It’s named for Joseph P. Overton, former VP of the free market think tank Mackinac Center for Public Policy. Glenn Beck wrote a thriller with this title based on the concept of public opinion shift. Take a look at the site for more detailed explanation and examples.] In short, there is a spectrum of reactions to an idea, ranging from unthinkable to becoming policy. The spectrum looks like this:
Unthinkable     Radical        Acceptable     Sensible        Popular        Policy
The “window” is the range of policies that are considered acceptable, rather than extreme at any given time. One election cycle ago it seemed odd to talk about the US Constitution as the basis for economic policy, even within the Republican Party. McCain claimed to be conservative, but in practice he wasn’t against federal intervention in the economy, and wasn’t even strongly supportive of cutting the budget, reducing the deficit, and lowering taxes. (Romney was clearly for those things four years ago and was considered, in some ways, too conservative to be electable.) 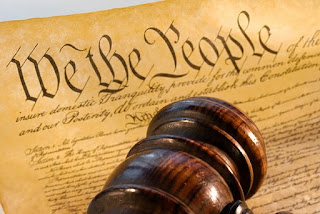 I know it seems like we’ve always believed in the Constitution (and some of us always have), but back then it was called extreme to insist that people who make the money should be the ones to decide who spends it. Now, in part thanks to Ron Paul for helping to shift the window, conservative free market economics are the only acceptable position for a GOP presidential candidate. All of them tout free market economics, and some articulate the concepts with words very similar to 2008’s Ron Paul.
In a Wall Street Journal editorial William McGurn wryly credits Obama for the shift. The piece as a whole deserves reading, but here are some excerpts:
Yes, in the Bush years the air was also thick with accusations that the Constitution was being "shredded."…
Where the accusations against Mr. Bush were led by prestigious law faculties and law firms, those against Mr. Obama reflect a more popular hue. Where the indictments of Mr. Bush were largely limited to war policy, those against Mr. Obama's extend broadly to all areas of policy: foreign, economic and social. And where critics of Mr. Bush were obsessed with outcome, the discontent with Mr. Obama has been magnified by the uneasy sense that he is changing the fundamental rules of the game….
We are learning, however, that ordinary Americans who never before heard of the Commerce Clause are perfectly capable of grasping the argument that if the federal government can require a citizen to buy a product in the market, there's nothing he can't be forced to do….
You can say Mr. Obama probably will not like where a greater public familiarity with the Constitution is likely to take us politically. But you can't say the former University of Chicago professor hasn't made it exciting.
The more Obama is out of touch with the “window” of acceptable ideas, which has shifted away from him rather than towards him, the more often he will seem extreme. If the shift is real, that is if Constitutional principles have become widely understood and appreciated, then it is a matter of articulating the principles to currently listening ears.
In terms of the Spherical Model, we have an opportunity to move upward toward freedom, prosperity, and civilization—if we can continue to articulate the philosophy to people who, after four failed years of imposed socialist policies, are ready to consider cutting government and abiding by our Constitution as a normal thing to consider.
The tempest within the GOP primary is evidence of this positive news. Tea partiers aren’t convinced anyone is conservative enough to suit them (maybe because they won’t be satisfied until the window shifts further). But all of the candidates are more conservative by record and word than our last nominee (maybe our last several nominees). Last time there was pressure to downplay conservative philosophy. This time all are practicing how to articulate the conservative message and honing their ability to do so.
At some point we will have a nominee. There will be some who refuse to believe he is good enough. But take heart that, whoever it is will speak a message that resonates with many more people. And the pull will continue to be toward freedom. That’s a good thing.
----------------------
*Photo credited to Corbis, from WSJ piece linked above.
Posted by Spherical Model at 3:22 PM