Economics on the Sphere

The Spherical Model gives us a way to look at government economic policies and know whether they’ll work or not—or even whether they should be tried.

Whenever government attempts something beyond the proper role of government (protection of life, liberty, and property), it causes unintended consequences—usually exactly opposite to the stated goals of the interference.
While this is a statement related to the Political Sphere, the principle is probably easiest to see on the economic sphere. For that, we’re going to review a couple of segments of the Spherical Model website on the Economic Sphere. If you’re not yet familiar with the Spherical Model concepts, you can get a quick refresher by reading “The Political World Is Round” or by watching the (very low-budget) video, here. Below, the indented parts are quoted from the website, interspersed with my comments today.

Just as with the political Freedom Zone, there’s a 45th parallel to stay above for optimum economic prosperity. In this zone, government is limited to its proper economic role: protect property rights, safeguard society from attack, and, if called upon, mint the monetary units while safeguarding the wealth. The US Constitution does limit the federal government. When government attempts to interfere, for whatever well-intentioned purpose, to stimulate the economy, manage unemployment, control interest rates, redistribute wealth, or tax for any purpose outside the proper role of government—it will always cause damage to the economy.
All that government needs to do is follow the Constitution, and we would have the most prosperous economy in world history in perpetuity. But following the Constitution has always been the challenge.
There’s a Davy Crockett story[i] I’ve used at this point. You can re-read it on the website. It tells how Davy Crockett learned from a constituent that government had no business using tax money on charity. He was able to persuade Congress, but only on that one piece of legislation.

Let’s add to that a story of James Madison—the principal writer of the Constitution, who ought to know, who was against a 1792 Congressional appropriation of $15,000 for French refugees. Madison said, “I cannot undertake to lay my finger on that article of the Constitution, which granted a right to Congress of expending, on objects of benevolence, the money of their constituents.”[ii]

It is a pattern of people in power to exert more power than they have been granted, ostensibly to do good, thus usurping power they had not been granted but setting precedence for future exertion of that power. The founders knew this, had seen it and experienced it, and read and studied so that they would word the Constitution in a way that would purposely restrict government from usurping this power. But it takes constant vigilance in order to prevent the usurpation. And after decades, even centuries now, of lawmakers overstepping “for the general welfare,” we are far distant from the Freedom Zone.
We know what the Free-Enterprise [Prosperity] Zone would look like: healthy, prosperous economy, with each worker benefiting from his own labors, and having the opportunities to meet his financial needs and build up wealth. There would be no guarantees of the success of every single person, but there would be better opportunities than in any other system in any country at any time in history.
We haven’t spent nearly enough time actually following the Constitution, and thereby staying in the Freedom Zone of the Political Sphere or the Prosperity Zone of the Economic Sphere.

We seriously lowered ourselves on the sphere shortly after the turn of the last century. Income taxes were instituted, and the Federal Reserve Bank was formed. Woodrow Wilson set the standard for Italian and German fascism in his efforts at government control. He interfered in the economy and encouraged his followers to do so. It was the interfering policies put in place early in the century that led to the Great Depression; these policies followed by Hoover and then Roosevelt lengthened and deepened the Depression.
Remember, any government act meant to do other than to protect the people’s wealth is economically unsound—it will cause harm, either in the short term or eventually.
We ought to know better. Out country has had enough experiences with extra-constitutional experimentation: Woodrow Wilson, FDR, LBJ, Nixon, Carter, Obama—for example. This piece, from the website, was written in 2010, when we’d suffered just about a year and a half of Obama interference, which malaise continued through his entire presidency: 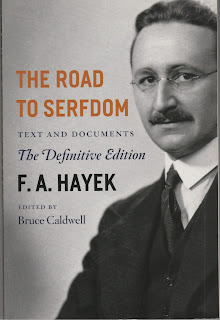 Friedrich Hayek, in The Road to Serfdom and others of his writings, details why central planning (another term for government interference) in decision making wreaks havoc. He wrote in the 1940s, with the clarity of having been there and observing as things happened, how and why Wilson, Hoover, and Roosevelt policies failed—and continued to fail and will always fail.
There is such a stark difference between the failure of the controlled economy and free enterprise that even a relatively mild step from control toward freedom leads to remarkable increases in prosperity. The Ronald Reagan era is such an example. The years from Lyndon Johnson and Jimmy Carter showed a continual rise in the misery index (unemployment rate added to the rate of inflation), until an average high of 20.27 during Carter’s administration. In relatively short time, Reagan was able to drop the rate down to 11.19—not low enough, but a huge improvement. He lowered taxes and deregulated previously controlled business sectors. Even without the liberal Congress lowering spending as much as Reagan had intended, there was marked improvement. The index continued to go down through George W. Bush’s presidency, and only headed back up when the liberal Congress (during Bush’s last two years) started imposing economic controls. Obama, during his first year, imposed more controls than any president since FDR, socializing industries, controlling banks, redistributing wealth, attempting to socialize the health care system—and the misery index responded, rising from an average 8.1% under Bush to 12.33% after a single year.
And note that the misery could be higher if unemployment were more accurately calculated; those unemployed more than six months, or those no longer seeking employment or who have taken low-pay temporary jobs, are not included. This means that, if unemployment is really closer to 17%, then Obama in a single year has “controlled” the economy into depression-feeling Carteresque misery. Right now the inflation rate is being held artificially low with far below market interest rates, which will at some point need correction. So by some objective measures, Obama’s economic errors have already exceeded Carter’s.
Reagan didn’t get us all the way up to the Free-Enterprise Zone; he got us generally above the equator with an upward direction—more remarkable because it was reached without the assistance of a like-minded legislature. And the result was huge. Unemployment and interest rates dropped, and GDP started a growth spurt lasting two decades.
We look now, a couple of years into the Trump presidency, and there’s been an effect on the economy very similar to Reagan’s improvement over Carter’s malaise. That ought to tell us something:

If we could make that much progress by going upward just above the equator on the Spherical Model, how much more prosperous would we be as a country if we followed the Constitution and moved up to the Free-Enterprise Zone [Prosperity Zone] and stayed there?
Here’s another really radical idea: If America could make that much upward, perpetual progress by abiding by the Constitution, wouldn’t that work for any other country that tried it? Yes. Yes, it would. They would have to adopt a constitution essentially like ours—one that protects life, liberty, and property while limiting government to just its essential role—like the list in the Preamble of our Constitution:

in Order to form a more perfect Union, establish Justice, insure domestic Tranquility, provide for the common defence, promote the general Welfare, and secure the Blessings of Liberty to ourselves and our Posterity
And then, of course, people doing well would need to voluntarily fill the philanthropic role that is needed to help those who cannot help themselves. These countries could keep their culture: their language, their history, their clothing, their music, their art and architecture.

Would we worry if competing countries started doing as phenomenally well as we were doing? No need. Because we’d be plenty prosperous. It isn’t a zero-sum game. When more wealth is created, there’s more wealth to go around.

If only we could make use of our founders’ ideas, and then export those ideas.

But they can’t be imposed on an unwilling people; people have to choose freedom, prosperity, and civilization. Lack of choosing them is the trouble we mainly have here in America. We need people to come to appreciate what actually leads to the blessed outcomes that are our potential, and then choose those ultimate good outcomes.

I’m willing to give it a try. Who’s with me?


[i] I first heard this Davy Crockett story from Nina Hendee, who told Texas history stories to school groups at the family restaurant Taste of Texas. I later found the full story: “Not Yours to Give,” originally published in The Life of Colonel David Crockett, by Edward Sylvester Ellis, republished at http://juntosociety.com, © 2002 The Junto Society.
[ii] This incident and quote came to my attention in “Healthcare—If Government Doesn’t Do It, Who Will?” by Larry Elder, online column August 27, 2009, on Townhall.com.

Posted by Spherical Model at 7:11 PM