Perceiving What Is Real

Sunday morning, while I was getting ready for church, I had BYU Radio playing, and there was a short clip of a 2014 talk by Dieter F. Uchtdorf. I looked up the whole thing later, but here’s the transcript of the clip I heard[i]:

It was less than a century ago that most astronomers assumed that our Milky Way galaxy was the only galaxy in the universe.[ii] They supposed all that lay beyond our galaxy was an immense nothingness, an infinite void﻿—empty, cold, and devoid of stars, light, and life.


As telescopes became more sophisticated﻿—including telescopes that could be launched into space﻿—astronomers began to grasp a spectacular, almost incomprehensible truth: the universe is mind-bogglingly bigger than anyone had previously believed, and the heavens are filled with numberless galaxies, unimaginably far away from us, each containing hundreds of billions of stars.[iii]
In a very short period of time, our understanding of the universe changed forever.
Today we can see some of these distant galaxies.[iv]

We know that they are there.
They have been there for a very long time.
But before mankind had instruments powerful enough to gather celestial light and bring these galaxies into visibility, we did not believe such a thing was possible.
The immensity of the universe didn’t suddenly change, but our ability to see and understand this truth changed dramatically. And with that greater light, mankind was introduced to glorious vistas we had never before imagined.
He then introduces the main question of his talk:

It seems to be a trait of humanity to assume that we are right even when we are wrong. And if that is the case, what hope is there for any of us? Are we destined to drift aimlessly on an ocean of conflicting information, stranded on a raft we have poorly pieced together from our own biases?
Is it possible to find truth?
He then uses the earlier telescope observation as a metaphor:

Scientists were struggling to understand the breadth of the universe until instruments became sophisticated enough to gather in greater light so they could understand a more complete truth.
The Apostle Paul taught a parallel principle regarding spiritual knowledge. “The natural man receiveth not the things of the Spirit of God,” he wrote to the Corinthians, “for they are foolishness unto him: neither can he know them, because they are spiritually discerned" [1 Cor. 2:14]
In other words, if you want to recognize spiritual truth, you have to use the right instruments. You can’t come to an understanding of spiritual truth with instruments that are unable to detect it.
That got me thinking. Because I am able to perceive spiritual things even when many in the world don’t—and further, claim that I don’t. 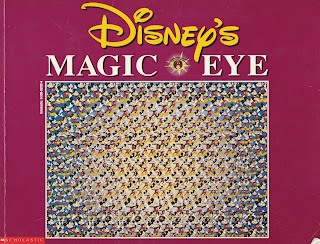 I was thinking of another analogy. We had some books when our children were young, called Magic Eye. There would be a picture of apparently chaotic color. But if you stared at it long enough, and relaxed your eyes a certain way, suddenly a three-dimensional image appeared.

It took some practice. For us,, in our family after we’d figured out how to see the image on one page, we’d get quicker at seeing it on the next.

Not everyone can manage to see the image. But it’s there, whether a person perceives it or not. As an aside, there’s a half-decade-old lecture by Jordan Peterson, called “Reality and the Sacred,” in which he discusses how miraculous it is that we can perceive anything. Sight, for example, is so far impossible for artificial intelligence; there’s too much complexity involved in perceiving and understanding what we see.

Anyway, it’s hard to explain the process of seeing that extra-dimensional picture exactly. You stare. You relax your eyes a bit, let go. And it happens. That’s not very exact. And it’s not very helpful to those who are struggling to see and cannot.

Those of us who have spiritual experiences, who can see the metaphorical additional-dimension image, encourage the non-see-ers. There are methods and steps that work for many of us:

·        Suspend disbelief and be open to the possibility of something beyond your five senses.
·        Pray.
·        Read spiritual texts that have record others’ spiritual experiences and lead many to have spiritual experiences from reading them.
·        Listen to the thoughts, ideas, impressions, or feelings that come in answer to prayer, or as inspiration even in between prayers.
·        Act on these promptings.
·        Record the promptings and results.
I’ve spent a fair amount of time listening to debates between believers and atheists. The atheists are not persuasive to me, because they dismiss my experience simply because they have not had those experiences. [Writing on this theme is adding up. See here, here, here, and here, for example.]

I don’t know why they don’t get them and I do. Sometimes it might be due to willful blindness on their part. Sometimes they’re decent people just not looking at things in a way that allows them to see the extra dimension that I see. But their not seeing something I’ve experiences doesn’t convince me that I’m somehow mistaken. The evidence is in my favor.

Remember the children’s story Horton Hears a Who, by Dr. Seuss? This elephant, with enormous ears and excellent hearing, and a kind heart, hears the sounds of the people on a world that exists on a dust speck on a clover. He knows they’re there, and so he protects them. But the non-hearers all around him, while they could simply ignore him and let him do his thing, are determined to stop him from believing he hears something. They threaten, and connive, and work to destroy. Why? Does Horton’s belief (knowledge that they can’t perceive) harm them?

In the end, Horton is able to convince the Whos down in Whoville, the people on the speck, that they need to rally and make enough noise to be heard. The final addition of one small child is enough to make them heard by the ears of all the others in Horton’s world—similar to the development of telescopes so we could see distant galaxies.

What if the Whos hadn’t been able to muster enough noise? Would they have still been there? Yes, Horton knew it, whether the others knew or not. (It’s fiction, I know, and therefore not actually real. I’m talking within the realm of this story.)

The inability to perceive does not determine whether something exists. This is particularly evident among believers in God and those who don’t.

It is not limited to our day; this has happened many times in history. But today, again, there is a vocal segment of nonbelievers that act like those conniving bullies in the Horton story. If believers commit to live better lives than they otherwise would—more honest, more committed to family, more hardworking, getting rid of corruption and trying to remove evil tendencies from their hearts—why should that garner the ire of nonbelievers?

Yet that’s what is going on when the attack companies like Chick-fil-A, or Hobby Lobby, or small business owners like florist Baronelle Stutzman or baker Jack Phillips.

Then there’s this story about a Christian charter school in Maryland that was eliminated from the voucher program for holding biblical views on sexuality.

There’s this story about Amazon discontinuing selling books by a Catholic psychologist, with a large body of work spreading over decades, because of pressure from LGBT lobbyists.

Further in that same story, the Ontario Court of Appeals has ruled that all doctors must give up their religious beliefs or get out of medicine:

Doctors must abort, euthanize, provide transgender interventions or any other legal medical procedure—or find a doctor who will, called an “effective referral.” In other words, Ontario forces doctors to take human life or provide services he or she might consider mutilating, even if the doctor considers it an egregious sin—either that, or be ghettoized into areas of practice such as podiatry in which no such requests are likely to be made. And if they don’t like that, as one judge put it, they can get out of medicine altogether.
Elsewhere in the world, such as Syria, Christians are persecuted to the brink of extinction, making everything I talk about here seem minor. Still, I believe we need to address the relatively minor attacks while that is what they are.

We mentioned Chick-fil-A above. They’ve been persecuted for years. Recently, during a gay pride parade in New York, a Chick-fil-A restaurant was vandalized, and the vandals ironically accused Chick-fil-A of being the haters.

There are sparks of goodness, still, because so many people want to be good and are trying to figure that out for themselves. One man tweeted this response to the Chick-fil-A attack: "I’m gay. I eat Chick-Fil-A. I love Chick-Fil-A. They have different beliefs than I do. We can agree to disagree on things. Doesn’t mean I hate them. Not seeing tolerance. Not seeing love."

Another good story is that the near-century-old Bladensburg WWI Veterans Memorial, in the shape of a cross, is being allowed by the Supreme Court to stand.


The odd question is why there would be so much hatred against a religious symbol in a country that is founded and dedicated on Godly principles—including, and maybe especially, the freedom to believe as we choose.

Like those bullies in the Horton story, I’d like them to stop with their screed long enough to explain why they are so desperate to stamp out the possibility that other people perceive something they have not.


[i] The entire talk is here, with both video and transcript. There’s an additional video within the text of a shorter clip, with illustrations, which I used for screenshots.
[ii] See Marcia Bartusiak, The Day We Found the Universe (2009), xii.
[iii] See Moses 1:33,35 in The Pearl of Great Price, and note that this was revealed in June 1830, nearly a century before Edwin Hubble announced his discovery of distant galaxies.
[iv] See, for example, the Hubble Heritage Image Gallery at heritage.stsci.edu/gallery/gallery.html.

Posted by Spherical Model at 8:29 PM