Can Atheists Be Good People?

Can atheists be good people?

The short answer is yes. Of course.

Civilization requires a critical mass of people honoring—or valuing—God, life, family, property, and truth. (An astute reader will see this as the condensed version of the Ten Commandments.)

If you’re an atheist, maybe that first one bothers you. But the reason it’s necessary is that God defines Good—and valuing life, family, property, and truth are Good. Without God as the definer of ultimate Good, then everyone is subject to their own personal definition of good, based on nothing but some combination of their reason and gut feeling. And they’re all different, and ever changing. So why should anyone see what you value as more important than what they value?

Everything you act out is predicated on your implicit axioms. The system of implicit axioms that you hold as primary is your religious belief system. It doesn’t matter whether you’re an atheist or not. That’s just surface noise….
It doesn’t necessarily have to do with your voluntarily articulated statements about whether or not you believe in something like a transcendent deity. So, what you act out is much more what you are than what you say about yourself. And what the hell do you know about what you believe, anyways? You’re complicated.
What you act on, then, affects civilization.

If you, as an atheist, indeed value life—as in the “Thou shalt not take innocent life” kind of value—then you are contributing to civilization.

If you also value family—by loving your family and being committed to them, rather than randomly having sex with whomever, or by abandoning, neglecting, or harming your family members—then you’re further contributing to civilization.

Property might not be as obvious. But property is the result of our labor, so it’s a physical representative of our life and its contributions. So you not only require others to respect what you own; you must respect the result of the labor of others—their property. You don’t steal or expect something for nothing. You don’t destroy other people’s property. You don’t cheat someone in an exchange or contract. If you’re honoring property ownership, then you’re contributing to civilization. Next to the failure to value family, the most damage caused to society is probably by people who don’t value the right to property.

If you’re not acting out valuing life, family, property, and truth, then you’re contributing to the decay of civilization, creating its opposite, which is savagery.

On the other hand, if you’re a religious person who claims to honor God but does not live a life that honors life, family, property, and truth, then you’re decaying civilization and pulling society toward savagery.

It’s about what you do with your life more than what you say you believe.

So, yes, a person who claims to not believe in God can be a good person, contributing positively to civilization.

But there’s another question: why does an atheist live a good life?

A person who believes in God and is striving to please a loving Heavenly Father will have motivation to be the kind of person who values life, family, property, and truth—both for a better life here and now and hope of a heavenly eternity. A person who is an atheist has no obvious motivation, because he sees an effort to please God as meaningless. 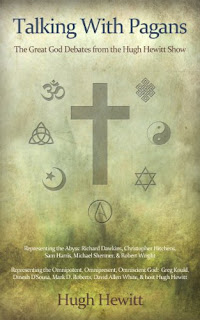 Most of the religion/atheism debates I’ve seen or read are with what I would call “moral” atheists; they’re mostly doing the things that contribute to civilization. They claim they do this because it’s rational.[ii]

But, when atheists claim it is only rational to live a good life, they are able to make the comparison—between good and evil, between civilization and savagery—because they have seen enough of the good around them.

I believe if they were not surrounded by people trying to live good and honorable and ethical lives, the likelihood that such a choice would be rational is infinitesimally small.

If they were surrounded by liars, thieves, whoremongers, and power mongers, they would most likely find rationale to strive to be the fittest survivor in those circumstances. (We’ll save the discussion of harm done by amoral atheists for a different discussion.)

A few months ago, I wrote, in a piece called "Good Is Real,"

If you live in a society where masters have their slaves serve them, and that is all you’ve known, it is logically reasonable to see that as the right way, and perfectly moral—which most of the societies on earth have done. That reasoning doesn’t make it morally true. But true religion—which tells us humans are created by God and have a divine nature—tells us that enslaving a human being is morally wrong.
A person whose view is toward ultimate good recognizes that there is something beyond the surroundings, something more elevated, transcendent. Something worth striving for, regardless of the savage environment.

There’s an Andrew Klavan podcast in which he talks about this, from a year ago, right after Billy Graham died. [Listen to 17:00 to 31:00 for this segment.] Klavan talks about the conversion of Louis Zamperini—the change of heart. He also talks about his own conversion.[iii] He says,

When the anger and the rage fell from Louis Zamperini’s heart, when the tendency to depression fell from my heart, I was experiencing something real that nobody can do. They can give you a pill that stops you feeling your depression, but they cannot give you a pill that improves your life and suddenly gives you an understanding of who you are, why you were made, and where you come from.
And he adds,

The evidence of what God does in people’s life is evidence. It lasts over time. Just like my love for my wife; it lasts over time. And it can be experienced.
I’m a believer. And I try to live in integrity with that belief. We’ll see how I do over a lifetime.
I’m not concerned about atheists who are seeking the good. I’ll let a loving God sort that out in the final judgment, when all truth is known and a person can make a clear choice. I tend to think those who are seeking the good, living honorable lives that positively contribute to civilization, will want to choose ultimate good for their eternity.

But I also think life can be happier here and now, and over time—and especially through hard times—when we recognize God’s love and intentionally seek ultimate good out of love for that goodness that we religious people call God. My experience trying to do that decade after decade is evidence to me; it’s meaningful.

Compare that to what the atheist offers. Again, the debate about God’s existence or not we can save for another day. The outcome of that always is, it takes a lot less leap into the unknown to believe in God than to believe we have an ordered, predictable nature with complex life that just showed up randomly. But beyond that, there’s the despair that comes from a life without meaning.

In that podcast by Andrew Klavan, he comes back around to where he began the segment, where he noted that things are relatively good; poverty is down, horrible plagues are abated, hunger is much less a problem than overeating. And yet people are miserable. Why? He asserts that it’s a lack of hope, of meaning. And these well-meaning atheists are not helping:

These guys, without meaning to, without being bad guys, are contributing to this crisis in America. When you tell people that they’re just a bunch of chemicals, and they can solve their problems by opiates, they’re going to die of opiate overdoses. When you tell them that there’s no purpose to their life, that nobody made them, that nobody loves them, their sense of right and wrong comes—it’s just a kind of random, relative idea, you take away from them every single thing they have of value. Everything they have of value. Their house is not valuable. Their love is not valuable. Nothing is valuable if they themselves are not there; if you tell them they have no free will, they have no soul, they have no spirit. These guys, with all the best wishes in the world, thinking that they’re saving us, are really starting a crisis.
Jordan Peterson, a clinical psychologist, offers an awareness of good and evil—a religious viewpoint—as a necessity in treating trauma, such as PTSD:

If you have PTSD, it’s because you’ve been touched by malevolence in one way or another. You need to reorganize your thinking along lines that are fundamentally religious. You need to start seeing the world as a battleground between good and evil—which is what it is, in the most real sense.
That’s what we experience in today’s world. We see it in clear battle terms, clearer every day. Meaningless mind efforts, or reason, aren’t the right tools. Meaningful, purposeful choosing good over evil—that offers the world healing.

Moral atheists are welcome among us. Keep choosing the good, and we’ll just draw the circle big enough to count you in. But don’t expect us to stop praying that you’ll also be able to experience an even more abundant life.
[i] I’m unable to locate which lecture this is from. I transcribed it from a YouTube video.
[ii] Some of these include Jordan Peterson and Sam Harris, published September 2018; Jordan Peterson and Susan Blackmore; Dinesh D’Souza and Peter Singer “God: Yes or No” debate at Biola University, 2008; Christopher Hitchens vs. Dinesh D’Souza , “Is Religion the Problem,” 2010; Talking with Pagans: The Great God Debates from the Hugh Hewitt Show, by Hugh Hewitt, 2013.
[iii] Klavan's memoir about his conversion is The Great Good Thing: A Secular Jew Comes to Faith in Christ.

Posted by Spherical Model at 9:44 PM