What Does the 14th Amendment Really Say?

Sometimes grammar is the solution to understanding. So I’m in my element. That’s the case today for our discussion about the 14th Amendment. Here’s the first, and most pertinent paragraph: 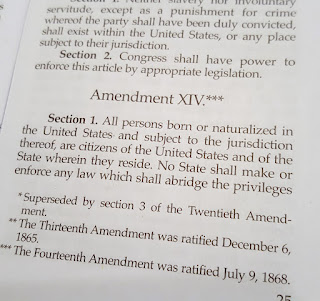 This amendment was ratified July 9, 1868. To understand it, it helps to know it followed what was called the Civil Rights Act of 1866, the purpose of which was to give citizenship to freed slaves. This legislation was pushed through Congress by a bloc of—of course—Republicans. Radical Republicans, they called themselves. That legislation said:

all persons born in the United States and not subject to any foreign power, excluding Indians not taxed, are hereby declared to be citizens of the United States; and such citizens, of every race and color, without regard to any previous condition of slavery or involuntary servitude, except as a punishment for crime whereof the party shall have been duly convicted, shall have the same right, in every State and Territory in the United States, to make and enforce contracts, to sue, be parties, and give evidence, to inherit, purchase, lease, sell, hold, and convey real and personal property, and to full and equal benefit of all laws and proceedings for the security of person and property, as is enjoyed by white citizens….
Putting the two together, we can see that “subject to the jurisdiction” means “subject to any foreign power.” It’s about allegiance. Aren’t visitors subject to our laws? Yes, and they also benefit from them—as people, but not as citizens. Citizens get additional privileges: the right to vote, and to receive government benefits, such as military protection from invasion, plus maybe education, welfare, or Social Security. There’s a distinct difference between being an American and simply being in America.

Why the amendment when there was already a law? There had been a prior decision by the Supreme Court, the Dred Scott case, in which SCOTUS ruled that a slave who was living in a state that prohibited slavery was nevertheless a slave and Americans were required to return him to his owner; furthermore, the case ruled that people who were racially black could never be US citizens.

In other words, it was already clear that you couldn’t trust the courts to rule correctly. Nevertheless, SCOTUS can rule a law unconstitutional, but it can’t rule an amendment to the Constitution unconstitutional; it is part of the constitution. So that is the reason the Civil Rights Act of 1866 was followed up with the 14th Amendment. They’re actually even closer than they appear. The amendment was drafted just two months after the legislation became law; the additional two years was the time for the states to ratify the amendment.

The debate about the 14th Amendment was never about granting citizenship to babies born here who were children of foreigners, visitors, or anyone whose allegiance was to some other nation (jurisdiction). That issue didn’t come up, because nobody thought, “Hey, you know what we ought to do? We ought to magically make any child of someone in the country, on vacation, say—or even illegally—a citizen. Then we can give that child of foreigners all the rights and benefits of citizenship, even if the child never assimilates or feels allegiance to our country with its principles of freedom.” Because that would have been stupid, for one thing. And for another, it had nothing to do with the purpose of the legislation and follow-up constitutional amendment.

So how did the idea of birthright citizenship come out of that pretty clear granting of citizenship to freed slaves and other black? It took a while, and some purposeful misconstruing.

The first—and only—relevant Supreme Court case came up about thirty years later (1898), concerning a man born to Chinese immigrants—not naturalized as citizens, both because the Chinese Emperor did not allow renunciation of his rule, and because of the US laws at the time did not allow for Chinese naturalization, based on a belief that they were too foreign to assimilate. Wong Kim Ark took a trip to China (not his first), and when he returned to port in San Francisco, he wasn’t allowed re-entry, because of a hold on allowing entry of Chinese at the time. But he said, “I’m not Chinese. My parents are. But I’m American. I was born here.” While he was held aboard the ship for five months, the case made its way through the courts to the Supreme Court, which eventually ruled that he was a citizen, based on his being born here and his parents being permanent legal residents.

But that is a very different thing from the current interpretation that anyone who happens to be born here, whether to illegal immigrants, temporary residents, visitors, tourists, travelers, etc., would magically be granted citizenship status, with promises of welfare benefits and education. In fact, it’s hard to construe a way to be both an illegal alien and holding allegiance to the United States. The illegal status implies failure of allegiance.

There’s a rather arcane argument, where grammar really comes in, based on the precursor to the Congressional record, during the debate about the 14th Amendment. Michigan Republican Jacob Howard, who had introduced the 14th Amendment, is recorded as saying this:

This amendment which I have offered is simply declaratory of what I regard as the law of the land already, that every person born within the limits of the United States, and subject to their jurisdiction, is by virtue of natural law and national law a citizen of the United States. This will not, of course, include persons born in the United States who are foreigners, aliens, who belong to the families of ambassadors or foreign ministers accredited to the Government of the United States, but will include every other class of persons.
The person who wrote the words, then, insists that the 14th Amendment means essentially the same this that the Civil Rights legislation of 1866 meant. But today people purposely misread, not only the 14th Amendment, but Howard’s statement about it.

The Congressional Globe, in which this is recorded, is neither an exact quote of the words spoken, nor is it intended to be the final say on punctuation. So, if you go by the full context of what Howard said, among others in the debate, you’ll see that “every other class of persons” cannot include Native Americans living on reservations and subject to tribal sovereignty (they were granted citizenship by legislation in 1924). So we know that the misreaders have it wrong.

So we could clarify (and people do[i]) by adding the word “or” in its appropriate place:

…who are foreigners, aliens, [or] who belong to the families of ambassadors or foreign ministers…
Grammar saves the day for truth once again!

What this means is, the 14th Amendment does not, and has not ever, granted birthright citizenship to children of parents subject to a foreign sovereignty.

Maybe we need a clearer definition of immigrant. Legal immigrants who have entered the country legally and have expressed their intention to be permanent residents—their children born here have always been considered citizens—even if they’re born before the parents become naturalized citizens. This would be different from someone working here on, say, a five-year work assignment but who still considers themselves a citizen of some other nation; their children would have the same citizenship as the parents.

If we as a people believe birthright citizenship is a good thing, we could hold the debate and amend the Constitution to say so. But we’ve never had that opportunity. We have had administrations who, for their own purposes (and those purposes are related to the same purposes that encourage illegal immigration, amnesty, non-citizen voting, and other impediments to sovereignty) granted such citizenship by fiat, but not by law.

So, can Donald Trump end the practice by executive order? Yes.

What would happen? Cases will make their way to the Supreme Court—which now leans originalist. Other than the one case, which doesn’t clearly define the issue, there isn’t reliable or clear court precedence. So they would likely look to the text and intent at the time of the writing of the 14th Amendment. I don’t know for certain how that would go, but it is likely to end the practice of “maternity hotels” and pregnant illegals purposely trying to get on American soil to birth a baby, who will then be a citizen, so they can claim, “But it would be cruel to separate families” as they plead not to be deported—even though this country has of course never forced deportees to leave their children behind simply because of a citizenship technicality; the country they would be returned to would undoubtedly accept their child as a citizen along with the returning parent.

If making it easy to be an illegal alien isn’t enough, how about offering a reward for being an illegal immigrant? No sane country would do that, right? Guess again. If you break our laws by entering this country without permission and give birth to a child, we reward that child with U.S. citizenship and guarantee a full access to all public and social services this society provides.
Does the United States have the right to decide its own citizenship rules? If it is a sovereign nation, then of course. If we go back to the original meaning of our 14th Amendment and end “birthright citizenship” for illegals or visitors, then we would be in line with the practice of 83% of the world’s nations, and about 6.642 billion of the world’s 7 billion people.

We don’t have to quibble about those currently granted citizenship. We can simply state what we as a nation will do going forward. As Hillsdale College lecturer and research fellow Michael Anton puts it,

Correct the issue going forward. Make clear to the world that the United States will no longer grant birthright citizenship to the children of non-citizen illegal immigrants, birth tourists, or people here on temporary work or student visas. The citizenship of those already born would forever be honored—even enshrined into law if necessary.[ii]
This would put an end to what might be called, in the insurance world, an attractive nuisance. We can stop attracting illegal immigrants, and get much better organized at allowing immigration of those who will value our laws, our freedoms, and the responsibilities of citizens who self-rule, and weed out the applicants who want to take advantage of us without becoming truly American.
[i] Michael Anton used this insertion for clarity in“Citizenship Shouldn’t Be a Birthright,” July 18, 2018, in The Washington Post. Others have used the same insertions, such as in "What Did the 14th Amendment Congress Think about 'Birthright Citizenship'?" by Mark Pulliam, August 21,2015, for Law and Liberty.


[ii] Michael Anton wrote two piece in July 2018 about birthright citizenship. The first is “Citizenship Shouldn’t Be a Birthright,” in The Washington Post. A few days later, in answer to critics, he wrote a much longer piece, “Birthright Citizenship: A Response to My Critics,” in the Claremont Review of Books. I this one he handles the grammar issues in more detail than I have, and also the historical issues. The estimates from the paragraph above about the world’s nations that do not have birthright citizenship come from his longer piece.

Posted by Spherical Model at 8:28 PM