It's Been a Year

We’re having something of a commemoration this weekend. It has been a year since Houston and beyond was hit with Hurricane Harvey and 50+ inches of rain in about three days. We're still Houston Strong. 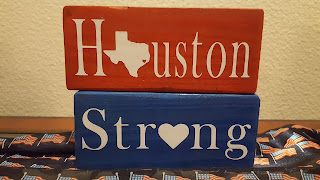 During this recovery year, we've learned a lot about goodness, and caring, and sacrifice under those difficult circumstances. As I said back then, there were stages. First, there’s saving lives, and then assessing the situation. Then comes mucking out, which had to be done fairly quickly. A week of standing water in a house can ruin not only everything the water touches, but anything the growing mold reaches. The mucking out includes removing all the flooring, drywall, and furniture out to the curb, and then power washing anything that needs it.

All this time, people are doing this while living without their belongings, in a shelter or a hotel, or with friends, or maybe in a rental if they can get one. And a lot of people going through this with their own homes also went to work to help their neighbors. And many many people who found themselves safe went to work to get the mucking out done for their neighbors.

The next stage was the debris pickup. Places were left looking kind of bleak and blank, with large dead patches on the lawn.

The result is that a few people got back into their homes, finished or not, within a couple of months. Many—I’d say an average—took six months. Some longer. And of those moved back in, some are still living with bare walls and floors, waiting their turn for the workers.

A couple of months ago we ran into an older scout troop, age 14+, from several states away. They had come to Houston for their high adventure camp—and spent the week putting up drywall for people in need.

Earlier, during spring break season, a church where I play music one night a week had housed youth groups from several states, spending their week away from school coming to Houston to help with rebuilding.

So that has been quietly going on, during these many months since the media outside Houston stopped talking about our event.

I drove around today, in my neighborhood and nearby, to see the changes. I took a few photos in the same places I did last year, to make the comparison. Most places, on the outside, if you didn’t know about the flood, you wouldn’t know anything had happened. Most trees and plants survived. Grass has grown back.

Here and there you still see a large dumpster parked out front, clearly with work still going on inside. In my neighborhood there were only a couple of those that I saw. In one of the older and harder hit areas, Villages of Bear Creek, those dumpsters were more common. But still, probably 90% of the homes looked OK from the outside.

I drove through Bear Creek Park, which is essentially part of Addicks Reservoir that is used for picnics, camping, soccer, baseball, and other park amenities whenever there’s no flooding. But when the heavy rains come, the park is intended to fill up with water. We’re used to it. It happens for a portion of most years. This time it was closed for several months. Today it looks mostly unscathed.

The bayou (drainage canal) just down the road from us, which is what overflowed during Harvey, has been undergoing dredging all summer. I think there’s a plan to do that to parts of the park and reservoir as well, since floods have brought in enough debris and silt to lower capacity. And while Harvey was something like a 1000-year flood (not likely to happen again for a millennia), there had been a 500-year flood—the Tax Day Flood—just a year and a few months earlier.

There’s a bond election taking place this Saturday, with nothing on the ballot but the bond. It’s likely to pass. And I believe the county have been good stewards of our resources. They had presentations and took feedback from the community about 20 times over the summer in preparation to know how best to use the resources.

The best case scenario, according to County Commissioner “Cactus” Jack Cagle, would be for the state to use the Rainy Day Fund—and really, if that wasn’t a rainy day, when could we ever use that money?—to pay infrastructure, such as dam improvements and possibly a third reservoir; and then have the county handle the building, because the county is most aware of the needs and priorities; and then have the US Army Corps of Engineers to do maintenance. That way the full burden isn’t on the country, but is shared by the state and by the federal government in ways those entities can be useful.
So, a year out, Houston is still strong. But still in recovery.

One of our church buildings, in the Villages of Bear Creek area, got flooded, along with the post office across the street. The post office is back in business—as is the library, not far away. But that church is still being worked on. When I drove past today, it still had two large dumpsters out back. We have two congregations from that building that have been sharing space with us for a year. We’re told work should be completed this fall, but I haven’t heard word yet on when.

Meanwhile, the beautiful temple up in the Champions area of Spring, northwest of Houston, flooded and had to be closed for eight months. But we’re happy to be back in there.

My friend Elaine, whose apartment complex was flooded, trapping them upstairs for a week, said this a couple of days ago:

I walked into the lobby of my apartment complex, and we have *flooring*! We haven’t had flooring since Harvey. Then I checked the mail and this was the weekly Kroger circular. Now I’m all emotional. We made it, ya’ll.
Here’s the circular, picturing Kroger workers helping out after the flood. 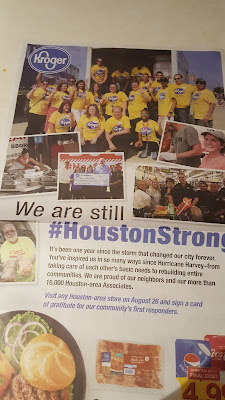 There were so many who helped. I don’t know if the nation and world is aware of the treasure we have in a furniture salesman we call Mattress Mack, Jim McIngvale. He turned his store—new mattresses and all—into a shelter after the storm, and invited restaurants to bring in food. He was an inspiration to all.

A few months ago, he honored members of my church, the Mormon Helping Hands, for the many hours of service. We appreciate being recognized by someone who has been tireless in his service.


One friend of mine, Derrick Campos, was flooded out of his house until around May, and is still living among the incomplete rebuild. He does a video blog called The Better Way, and this week he did a one-year anniversary of the flood. I love the cheerful way he talks about it. What you don’t see is that this was their third flood—in this house they built several years after we built ours. It’s just north of Villages of Bear Creek, and it’s near a bend in Langham Creek on its way to the reservoir. But it’s a nice, newer neighborhood that wasn’t expected to flood. And what do you do now that it does? Hope you don’t have to face it—yet again—for another thousand years. Anyway, here’s Derrick’s video about having an attitude of gratitude:

One thing you don’t know about yourself until tragedy hits is how much you can handle. And when it happens, you learn what it feels like to be lifted up by other caring people, and by God, whom you can feel with you, keeping you from despair. All Houston appreciated the help and prayers from our neighbors around the country and around the world.

I have a friend, from high school English class, who makes his living as photographer G. Brad Lewis of Volcanoman.com. He has spent decades documenting the Kilauea volcano in Hawaii, which has been active and wiping out neighborhoods of his friends the past couple of months. This photo is from yesterday.

Yesterday and this morning he sent out a couple of photos of Hurricane Lane, which is about to hit them: he took the photo of the wave; I’m assuming he did not “use his new drone” to get the satellite image. 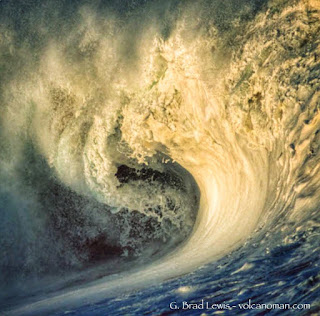 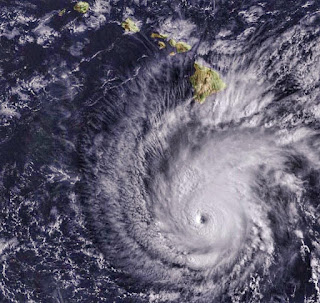 Anyway, it looks like people continue to be in need of our prayers. But one thing we know, after this year, is that love is felt over distances, and prayers work—both to inspire good people to do caring things, but also just to lift heavy hearts.

Posted by Spherical Model at 9:29 PM