Hurricane Harvey made landfall near Corpus Christi on August 25th, and made its way north to Houston August 26th, beginning the biggest flooding event in recorded US history. That was one month ago today. So I took a drive, camera in hand, to see how things look now, compared to that crazy day.

There aren’t any hills in Houston. We use overpasses and skyscrapers for views. So when you see a little hill like this one, you know it’s not natural. This is the Addicks Reservoir Dam, not far from the spillway. Most of the time, it’s just part of the road.

Eldridge Parkway goes through the reservoir. During heavy rain, it floods, and they close it. This has happened maybe a dozen times in the nearly 20 years we’ve lived here. It’s part of the plan. It was closed until a few days ago. There’s still water in the reservoir that hasn’t drained yet.

Bear Creek Park is the alter ego of the reservoir. Our kids used to play baseball here. There are soccer fields, camping areas, playground equipment, a lot of forest primeval, and other things you’d expect in a park. That’s how we make use of the space between floods. It has probably been out of commission for an entire month several times. We don’t know how much longer it will still be water instead of playground.

Bear Creek Village was one of the worst hit neighborhoods. For those who think people shouldn’t be building in flood zones, understand that this neighborhood is 40-60 years old. They probably thought they’d never flood. But it turns out, when the reservoir fills up with 800-year flood waters, they do flood.

It took quite a while to get the water out so the mucking out could be done. Finally now the debris removal is underway. You can see the heavy equipment at work, and some really big trucks. 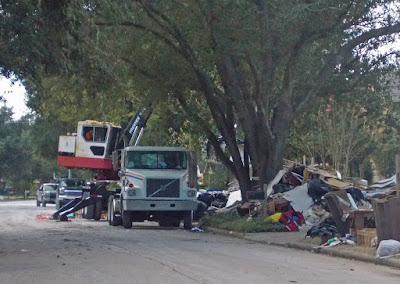 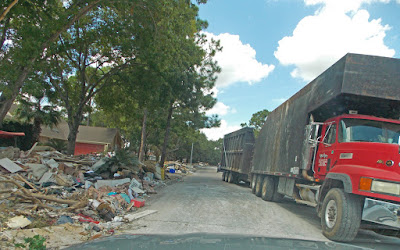 There’s still a lot of debris to pick up. 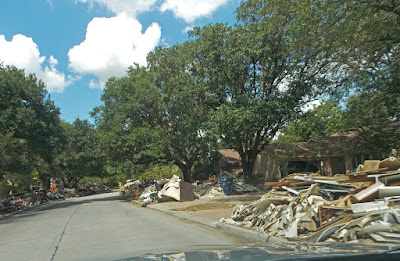 Sometimes you see stacks of furniture, like this, that remind you there was a live family that lost all of this. 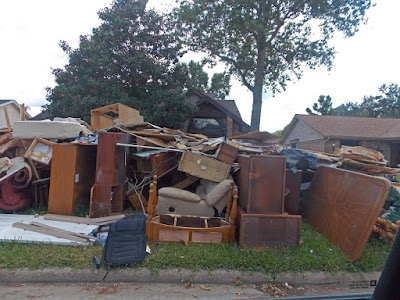 The post office I usually use is being rebuilt.

Closer to my house, you can see more lawn scars—the places where the debris sat before getting picked up. Some houses are marked with a C or an H. I believe those were put there by rescuers. I haven’t been able to learn what they stand for. Maybe “clear” and “hazard.” I’m not sure. I'm not sure how they remove them either. But that's a minor detail by comparison with rebuilding the home's interior. 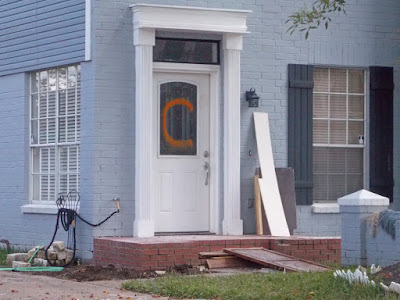 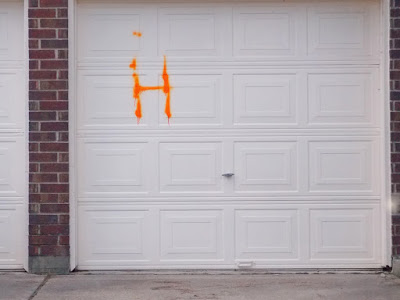 In my neighborhood, I was able to do a few side-by-side comparisons.

The street the boats went down to rescue people is clear and dry again.

This was our entrance underwater, and back to normal now.

The Mormon Helping Hands were still out this past weekend, but we're reaching the end of mucking out. Unfortunately, homes that haven't been able to do that yet may be a total loss. The church where I play music with friends once a week is back to normal today; a week ago it still had refugees sleeping in the sanctuary, and a dog refugee room somewhere at the back (we could hear them). That was a long time for a church to be used. Schools are open, and students have been reassigned to new schools as needed.

So Houston lives on. The streets were designed to flood, as backup waterways when the bayous are too full. There’s a lot of engineering that helps this city handle massive amounts of rainfall. But when several feet (not just inches) come down all at once, even this system is overwhelmed.

What’s amazing, really, is how well the water was handled, how few lives were lost. And most important was how neighbors, from near and far, helped one another. Which needs to keep happening for some time yet.

There are a few areas that might not be rebuilt. And there are plenty of places still in the midst of cleanup—way before restoration. But what’s surprising is how much has returned to normal for most of Houston, and how much hope there is that most of us will have our lives rebuilt eventually.

We feel blessed here. So many people showed they cared about us.

Meanwhile, we’re watching the devastation in Puerto Rico from Hurricane Maria. We know a missionary there, who was flown out today, along with a hundred or so others. They had been working hard there, but  The island is in desperate need. there wasn't enough food, clean water, or housing for them. They had stayed in the mission office during the storm, packed in together. Most of them were unable to return to their apartments, so they lost all their belongings beyond the change of clothes with them.

There's no electricity. Spotty communication. Transportation difficulties. Prayers and aid need to go their direction next. That's what good people do for one another.
Posted by Spherical Model at 9:59 PM