This is part IV, the final part, of our discussion of the Platform and Minority Report, from the Texas State Republican Convention. Here are the subjects in order:

We mentioned the idea of minority reports the other day. That was about the Nominations Committee, which took up a lot of time on Friday afternoon of the convention. 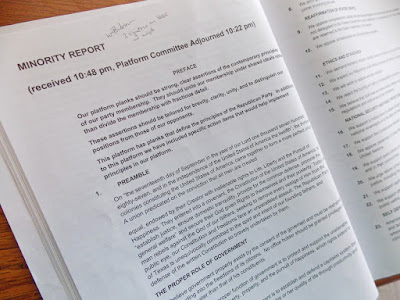 A minority report isn’t all that rare on the Platform Committee. But usually it is related to a particular issue. Maybe a single plank. If I’m remembering right, a few years ago there was a push for outright legalizing marijuana, which failed, but there was a minority report on that issue. That meant that a sizable number disagreed with the committee’s decision, so they brought their alternative up to the main body at the convention. (It usually fails there, as it did that time.)

The minority report this year was different in many ways. Its intent wasn’t on a single issue; it was aimed at the size of the platform. The premise is that it should be shorter.

I’ve thought that before as well. I really like the Preamble and Principles on the first page of the platform. Isn’t that enough?

If you’re looking at the basics that we almost entirely agree on, then that’s a good platform. But I’ve learned, over the past few years, working on the district platform committee, and now behind the scenes at the state level, that the platform really is used to advance legislation, particularly in the state legislature. Sometimes that has to be specific.

And there are people who come to the convention—are active politically in the first place—because of a particular issue that is very important to them. Without that issue, they’ll let someone else do the activist work.

So there are a lot of platform planks: 332 this year (including the preamble and principles, which are also numbered as planks). That’s more than in past years. However, some previous planks were split into multiple planks. The platform isn’t really a lot more issues—or words—than previous years. There are between 3,000 and 6,000 bills proposed in a legislative session. Only a portion of our planks, maybe 250, will be used to direct them. So maybe we don’t have too many.

But there’s an understandable fear that we can’t all agree on the whole platform.

However, that fear has been addressed. In 2016 we started having a plank-by-plank vote to accept or reject, which we did again this time. That shows stronger agreement or lesser agreement, and it’s clear we don’t all agree on every issue. (I voted against maybe half a dozen. None got voted down by a majority.)

We try to hold our representatives accountable to the platform. But they aren’t required to agree on every plank any more than we are. They are required to vote in accordance with the Preamble and Principles. Failure to do so multiple times can bring sanctions against them (which is what happened with the one resolution at the end of the platform this year).

Also, the new arrangement into categories related to the state senate, and the section-by-section debate, allowed us to cover more issues more fully in the whole body of delegates at the convention. To do that, we had the latest version available online all week, and the printed version a day earlier than previous years.

One of the common conversations after plank-by-plank voting was, “I guess I need to read it and make my choices ahead of time.” Yes. That’s the idea. The debate before the body is not the time to learn what’s in it—which has been practice in the past, and very frustrating. Now it’s on the delegate to do some preparation. That’s better all around.

Would shorter be better? Maybe. But every plank was supported by someone. And in the past those urging for a shorter platform did it as a maneuver to avoid accountability on specific issues. The less specific, the more wiggle room a politician has. However, I don’t believe that was the intent of this year’s Minority Report signers. Anyway, if it’s going to be shorter, that should happen through the natural debate process.

The Minority Report signers had their own version. Much of it was taken from our platform—even a last-minute title. And then there are some things that were their own. It was still 81 planks long, which is ironically not all that short. The preface and preamble were different. The principles, as a section, are missing. Then come 15 categories of issues (more like former platforms, rather than our current legislature-oriented categories), followed by action items in 22 categories. Individual planks under the category headings do not have titles.

Let me repeat that: he never shared it with the whole committee. Debate was complete. Our platform was accepted by the Permanent Committee. And then he asked to reopen debate to present his minority report. The parliamentarian probably should have squelched it at that moment; instead, he asked the indulgence of the chair to allow it, in order to avoid more parliamentary difficulty during floor debate.

The committee hadn’t seen it, hadn’t discussed it. There was no public testimony concerning it. The author, pretty much single-handedly, decided what to keep and what to toss, and what to do differently.

It turned out that three of the signers were also elected as SREC committeemen/women (State Republican Executive Committee, a man and woman from each senatorial district in the state), which disqualified them. This came out during floor debate. I didn’t understand the technicality that led to that decision. I guess they hadn’t understood it either, or they wouldn’t have signed. Anyway, without their signatures, there weren’t enough signers for a minority report, and it was withdrawn.

The author did get his allotted few minutes to present his reasons for wanting a shorter platform, which plants the idea for another year. That may be all he wanted.

The point of all this discussion about the platform—and about the convention entirely—is to show just how grassroots the party is here in Texas. I think that’s the way it should be.

We’ll have just one more post about the convention, which is a big more nationally relevant. I’d like to share some of Senator Ted Cruz’s speech. So that will come next.

Posted by Spherical Model at 12:39 PM