Platform and Minority Report, Part I

The debrief from the Texas State Republican Convention continues. Today we’re finally getting to the platform, which is where I spent my many hours. In fact, I was still doing final edits late this past Wednesday night. The final version was published online Thursday—almost immediately after which I noticed a missing period. Sigh. 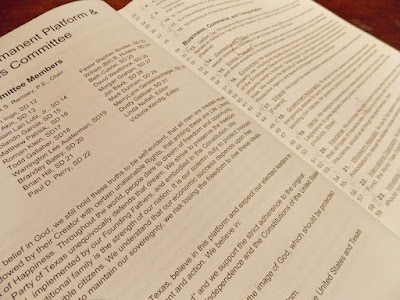 Anyway, the ideas and discussions surrounding the platform are what is interesting.

I’ll be covering some of the bigger issues—at least the ones that got my attention and seemed to have a lot of public interest—in four parts. Today we’ll look at cannabis. (Yes, this is the Republican Party. Have patience and read on.) Then we’ll handle these other issues, in three subsequent posts (all this week):

I manned the computer in the Health and Human Services Subcommittee, which took testimony for an hour and a half—plus as issues came up during all of Monday afternoon and evening. Still, one testifier took the subcommittee to task for not being willing to take enough testimony. You can’t win. But it was, indeed, a lot of public testimony.

One of the issues that took a great deal of time was medical marijuana. It wasn’t really about what you think, and it didn’t go the way I would have expected. I learned a lot. The first to testify was to warn against the slippery slope, and included a handout of information related to the dangers of marijuana. That was kind of what I expected, and accurate as far as recreational use goes.
But there was a plank in the 2016 platform that said this:

There are currently a very few, strictly limited uses of extracted oils. I can’t reproduce the testimony accurately. But there are non-psychotropic oils, such as cannabidiol, I believe, that have uses for certain intractable epilepsy. Some people believe it should be up to doctors to determine whether that use should be broadened to a wider range of epilepsy patients.

And there was touching testimony related to psychotropic oil THC (tetrahydrocannbinol) derived from cannabis that has offered remarkable help, legally, to certain types of autism and other mental illnesses—already treated unsuccessfully by other psychotropic drugs.

One problem is that cannabis (marijuana) is classified as a Schedule 1 drug, which means it is declared to have no possible positive uses. That means it’s always illegal, and even doing research is difficult or illegal. I don’t fully understand this, because oils such as marinol (synthetic THC) have been known, and used, for several decades. And uses continue to be found. So research is being done somewhere. But maybe not in Texas. The schedule classification is a federal responsibility. Yet pressure from states, along with testimony such as we heard, can bring about change there.

Anyway, our non-binding platform ended up containing two planks related to use of cannabis for medical and research purposes. No one testified in favor of its recreational use. Here are the two planks:


Cannabis Classification: Congress should remove cannabis from the list of Schedule 1 and move to Schedule 2.

In the Criminal and Civil Justice Subcommittee, and then in final discussions involving the whole committee, there was debate about possession of small amounts of cannabis, with the plank finally making it a civil offense with a fine, rather than a criminal offense, to possess one ounce or less.

Civil Penalty: We support a change in the law to make it a civil, and not a criminal, offense for legal adults only to possess one ounce or less of marijuana for personal use, punishable by a fine of up to $100, but without jail time.

I disagreed with this plank. The argument is that you shouldn’t be filling up prisons with nonviolent offenders, such as minor drug users. But this is not the case. The data presented included all nonviolent offenders—grand theft auto, embezzlement, drunk driving, etc., and lumping in minor drug offenses in with them to make it seem like we’re wasting our time on unnecessary prosecutions. But this is disingenuous.

The Harris County DA, Democrat Kim Ogg, got voted in with this at the top of her agenda. It has been wreaking havoc. It’s very rare to have a first time offender jailed. But this policy takes away bargaining power from prosecutors on subsequent offenses. Also, you would put police in a bad position, trying to guess whether the amount possessed is 1.1 ounces, rather than .99 ounces—because, if they’re wrong, they open up the police department to false arrest lawsuits.

The plank-by-plank voting had 1431 votes against, about 19%, which was higher disapproval than all but a few other planks.

It’s good that the platform is just a beginning point. Legislation has to follow, and that is another opportunity for testimony and debate. So maybe we can prevent movement in this unfortunate direction.

Posted by Spherical Model at 8:37 PM