Andrew Klavan spoke at University of Texas Austin last night, and I listened in online. Klavan is a novelist, of gritty crime stories, and has been a screenwriter in Hollywood, recently authored a book about his conversion to Christianity (The Great Good Thing), and does a podcast for The Daily Wire. He’s been around a while, and spends a lot of time thinking about the culture. In fact, I first got acquainted with him through his “Klavan on the Culture” videos for PJ Media. 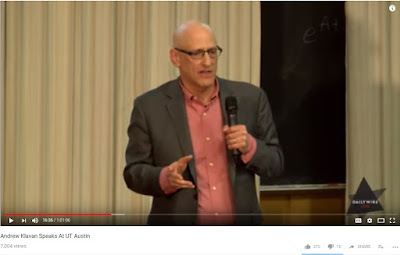 Anyway, he was talking about the left’s control of the narrative. He says, in film, “What the left does is they solidify the narrative made in the news in historical films.” And he gives examples, and shows how they skew reality. [Note: I generally avoid the terms left and right, because the Spherical Model has a better way. But, in this piece today I’ll go with his term, which means the statist tyranny perspective, located south and east on the Spherical Model; it's opposite is freedom in the north.]

For example, Klavan told the story of the JFK assassination. Besides the news story itself, there was a front page editorial on day one in the New York Times (which he always refers to as a former newspaper, and in this telling says this was when they were still a newspaper). The editorial tried to claim the assassination wasn’t a crazy communist acting on his own—even the Soviet Union had refused to take him, he was so crazy—because he was afraid President Kennedy was somehow going to overthrow the Castro regime in Cuba. The editorial claimed, instead, that it was Republicans who were afraid Kennedy would pull out of the Vietnam War.

I’d need to see the editorial, because I was too young then to know much, but I’m aware that the US didn’t get involved in the Vietnam War until Lyndon B. Johnson was president—and we were in it until Nixon pulled us out. Then, after winning all the battles and agreements, it was a Democrat Congress that gave away the peace. Anyway, not his point. His point was that the editorial started the conspiracy theory that was debunked repeatedly, including in court. But it lives on, because in the 90s Oliver Stone made a movie depicting the conspiracy as if it were the truth. So that is what people who don’t remember history actual think is true.

Another example was Argo, about the cruise ship full of people taken hostage by Iranian terrorists. President Jimmy Carter was ineffectual and disastrous in that event. The hostages were held for something like 444 days—released on the inauguration day of President Ronald Reagan. But the movie, while it depicts Carter only briefly, lionizes him as heroic. So people who didn’t happen to be aware of what was happening in the late 1970s think that might be the true story.

Klavan talks about the demise of his career as a Hollywood screenwriter.

One of the reasons my Hollywood career got nailed was during the War on Terror—one film after another—one film after another was made saying that our soldiers were rapists, our soldiers were killers. That was The Valley of Elah. Remember, he comes home and he’s so upset by having been in Iraq that he starts killing people. They were fools. Lions for Lambs, with Tom Cruise; that was where these Republicans wanted a war to manipulate the press, and so they sent these poor, foolish, patriotic clowns off to war and they got killed.
One movie after another. And I started to protest; I started to write pieces about it, because, I didn’t care whether they were for or against the war, but I thought it was wrong to make anti-war propaganda while the soldiers were in the field. That had never happened before. So I started writing about it, and, of course, it was hard to get a job after that, but it was worthwhile.
So, they’re making one picture like this after another. Every one of them bombed. Every one of them bombed. And so, Variety, which is our trade paper, the show business trade paper, started to write pieces saying, “People just don’t want to see movies about the War on Terror.” I mean, that’s how wrapped up in their narrative they are. People don’t want to see movies about the War on Terror.
And then Clint Eastwood made American Sniper, and it became one of the biggest grossing R-rated films in history. And they said, “That’s strange.” You know, “Why did people go to this picture?” Well, it’s because American soldiers weren’t portrayed as rapists and killers and madmen when, in fact, our enemy were the bad guys. You can be against the war, but we weren’t the bad guys. Maybe we shouldn’t have been there, but we weren’t the bad guys. That’s all that American Sniper showed, and people showed up for it in droves.
Why is this important? He illustrates with a quote by Joseph Wilson, who had, back in the day, declared that President Bush had lied, even though he hadn’t; Bush had used the same intelligence as everyone else, including our allies in Britain and elsewhere. Wilson was married to Valarie Plame, whom he frequently introduced as his CIA agent wife. She wasn’t covert. But it became an issue, because the left wanted an issue, and eventually Scooter Libby was entrapped (remembered a detail in the wrong order when talking with the FBI about something they already knew the answer to, and that was not related to a crime to interfere with an investigation of), and he was convicted, and President Trump just recently pardoned him.

Anyway, there was a movie made about the incident called Fair Game, which pretty much no one saw, in which Valarie Plame is turned into a CIA hero, with an evil Dick Cheney and George W. Bush conspiring against her.

So, that Joseph Wilson said, “For people who have short memories or don’t read, this is the only way they will remember the period.”

Klavan follows with this: 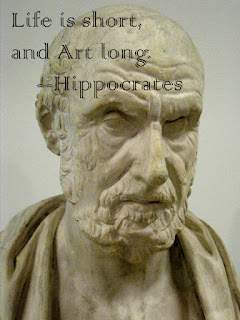 Life is short; art is long. Art lasts forever. Movies will be out there forever. You, one night, at 3:00 in the morning, will be channel surfing, and you will see JFK on TV, and if you don’t know any better, that’s what you think the story is going to be. They own the narrative.
He ends the talk portion of the night with this:

There is another narrative. It’s our narrative, which is the narrative of the truth. You know, I’m not one of these guys that believes that facts are everything. I think the internal world is a beautiful, beautiful thing. Beauty is in the eye of the beholder. The jaguar would not be swift unless we had the word swift in our mind. It doesn’t know what it is; only we know. You know, the inner world matters. But you’ve got to align it with the real world. That’s what stories are for.
And the fact that the right doesn’t know how to tell stories, and the fact that it doesn’t care, and the fact that it doesn’t pay attention to the arts except to complain about them and censor them, is a problem for me.
So, I’ll just leave you with this: the truth will set you free, but you’ve got to know how to tell it. You’ve got to know how to tell the story.
Later, during the Q&A, Klavan talks a little bit about what we, with this alternate narrative of truth, can do. He says we have the upper hand on comedy. That’s why Jimmy Kimmel goes on TV and cries every night. Life isn’t funny to them. They’re angry, pretty much by definition. And cynical. They do biting comedy, but it doesn’t feel good, even to people who agree with them. It’s ugly and tears people down. And for people who like to think of themselves as the good guys rescuing the world from evil, tearing people down has got to wear thin after a while.

He thinks, and I agree, that we can’t just do our thing, badly (like so many Christian attempts at art), and expect to win the culture. We need our own institutions. Our own awards. Our own production companies. And we need to produce things that tell the truth, and tell it well.

He suggests as examples of moral stories told well Crime and Punishment, and even The Godfather. Sometimes you end up portraying ugly things, but you gain insight from that.

Back in literature classes, that was how we looked at tragedy, Shakespearean tragedies, for example. Bad things happen. They’re upsetting. But there’s an enlightenment you get from looking at the way things play out when people choose to do bad things.

When he was talking about getting our own institutions, I was reminded of some other media issues lately. For example, Facebook. It is indeed controlled by people with leftist ideologies. Same with Google, YouTube, and Twitter.

Those are all supposed to be open platforms, an equal playing field for various ideas. We all agree that they shouldn’t be used to incite violence, allow for human trafficking, fraud, theft, or other crimes that are also crimes outside the digital world. But they shouldn’t be “protecting” people from disagreeing ideas. PragerU videos are not a danger. Seriously.

So, the better answer would be to come up with an actual open platform, available to everyone, as an alternative.

That’s not an easy thing. As long as Facebook is there, and that’s where I get a lot of social interaction that I appreciate, I’ll probably be there. But if somebody does come up with an alternative, I’d be willing to try that as well. And then, if the alternative becomes sufficient for my needs, I’d be willing to jump ship.

So, to those daring entrepreneurs, inventors, artists, and world changers, if you’re a seeker of truth, as I am, I’m wishing you the best of luck, and all the support I can manage to give if you can make a way for us to get the alternate narrative—the truth—out there.

Posted by Spherical Model at 9:10 PM