The Constitution doesn’t grant us rights. It’s the other way around. We, the People, grant certain limited, enumerated powers to the federal government.

There’s a reason we need to limit government power. Mainly, it’s because governments have a long and storied history of tyranny. In other words, governments can’t be trusted to limit their power.

Then the representatives of several of the states spoke up. What if there came a time when these things weren’t still understood? Maybe some of them needed to be spelled out, just as an additional guarantee. This included Virginia’s George Mason, who had proposed major portions of the Constitution, but was suddenly saying he wouldn’t vote for the Constitution unless it contained these guarantees.

What is a right? In the context of the Bill of Rights, we’re talking about natural rights. That means the rights you’re born with. You’re granted these by God, because you are a human being.

There are five listed in the First Amendment. Most of these have to do with freedom to think, or express ideas:

We’ve had plenty of contrasting evidence, much of it in the past century, showing what harm comes to the people when government tyranny steps on these rights.

The Second Amendment concerns the right to protect yourself. The main proper role of government is to protect us—our lives, liberty, and property. We hire government to take on this role so that we don’t have to spend all our time and energy protecting ourselves. But that doesn’t mean we give up our right to protect ourselves as well.

It’s like any other service. If you hire someone to clean your house, that relieves you of much of the need to do it yourself, but you don’t give up the right and ability to do some additional cleaning yourself whenever you feel like it. If your kid spills cereal all over the floor, you’re not required to leave it there until the cleaning service arrives.

If you’re receiving particular threats, you might hire your own extra security team, in addition to the local, state, and federal police forces. They’re busy spreading their protective force across the whole population, so you might not feel confident they’ll be on hand when you’re vulnerable. You retain the right to protect yourself. If someone tries to attack you, physically or with a weapon, you have a right to protect yourself—even physically or with a weapon.

There’s an extra, historical meaning attached to the Second Amendment. It has to do with defense against government. The founders knew, because they’d had to break free from tyranny, that they needed weapons to prevent that tyranny from coercing them into submission. The Constitution prevents government from getting out of hand—but only if government is held to obedience. Government could come and threaten your life, liberty, or property as easily as any thug. Maybe easier, since a thug may have to face prosecution. Who do you appeal to if government is the perpetrator?

Anyway, foreseeing the possibility, because they’d lived through it before, the founders guaranteed the right to self-protection from both outlaws and government.

We could go through the rest of the amendments as well. But let’s summarize by pointing out that the Ninth Amendment says that, just because it isn’t enumerated here doesn’t mean the people don’t have other rights. And the Tenth Amendment says those powers not delegated to the federal government are still held by the states and the people.

It’s troubling when people, in ignorance, start saying things like, “They should demand a repeal of the Second Amendment,” as former Supreme Court Justice John Paul Stevens said a couple of weeks ago. Is a former justice ignorant? Apparently. Did he fail to read the Ninth Amendment? Because we would still have the right to self-defense whether it is written in the Constitution or not.

Pretending that “common sense gun laws” that restrict law-abiding citizens doesn’t interfere with the right of self-defense is disingenuous. It’s not a matter of weapon availability. People have said, partly in jest, that if they took all our guns (if they even could), murderers would still get them. And if, in an invented world, criminals couldn’t get guns, they would use knives. What are you going to do, outlaw knives?

And then, following a series of knife attacks in London, Mayor Sadiq Khan outlaws knives. He tweeted, “There is never a reason to carry a knife.”

I can think of reasons. Like, if I’m going to a friend’s house to help cook. (I have better cooking knives than most of my friends.) I carry a knife with me when I travel, because I have to take care of most of my own food because of allergies. If I were going to do a project at a charity that required opening boxes, I’d consider bringing my own box cutter. If I were going fishing, I’d carry a knife for gutting the fish. If I went shopping and found an excellent cooking knife, I’d need to carry that home. So, those are all logical and common reasons to carry a knife. But, being who I am, no one around me would be less safe because of my carrying a knife.

Oh, one more reason: if you’re living in a city where they’re having a spate of knife attacks, and you weren’t allowed to carry a gun, you’d want a knife for self-defense. 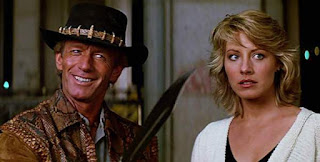 Remember that moment from the movie Crocodile Dundee, when he’s in New York and some thug mugs them at knife point? And Dundee says, “You call that a knife?” And then he pulls out his own, bigger near-machete, and the thug runs off. No one is injured. No one is robbed. That’s what non-criminals can do with a weapon. It’s not the weapon that is the problem; it’s the person wielding it. And if it’s a bad guy, you need a way to defend yourself.

Back to that First Amendment. We’ve been listening to Senate hearings with Mark Zuckerberg, about Facebook’s use of private information, and about its policies to prevent conservative messages from getting through.

In his questioning of Zuckerberg, Senator Ted Cruz asked him about purposeful and routine suppression of conservative ideas from trending stories. And he listed CPAC, Mitt Romney, Lois Lerner and the IRS scandal, Glenn Beck, Chick-Fil-A Customer Appreciation Day page, a Fox News reporter’s page, more than two dozen Catholic pages, and Diamond and Silk’s page (two sisters, black, who support Pres. Trump). Diamond and Silk were told their content—which is clean and pro-American—is dangerous to the community.

Cruz went on to ask if he was aware of any suppression of stories for Planned Parenthood, MoveOn.org, or any Democratic candidate’s page.

Zuckerberg claimed to be unaware of any of these. He claimed his personal goal was to have a free place for all these ideas—with exceptions we can all agree on such as terrorism, self-harm, or human trafficking. I want to believe him. But, if his company is doing this censoring, he’s responsible whether he’s personally aware of it or not.

In Cruz’s list was the IRS targeting. I got an update email this week from Catherine Engelbrecht of True the Vote, which trained me in poll watching here in Houston. She brought us up to date on recent results. Besides the nonprofit being held up illegally by the IRS—even though it was what ought to be considered politically neutral, in favor of free and fair elections—her personal business was targeted by the FBI and multiple other agencies, preventing her and her family from making a living. This week things were supposed to have been settled finally. But the result has been essentially nothing. No one is held accountable. And anyone in those organizations just got carte blanche to target anyone they want in the future. And we’re left wondering what good it does to oust a corrupt regime if the new regime is too timid to stand up.

Senator Ben Sasse, in his questioning of Zuckerberg, asked about the definition of hate speech, which Zuckerberg was hard pressed to define. There are large categories we can agree on, such as calling for violence. But Senator Sasse was more concerned about the “psychological categories.”

Sasse: “You use language of safety and protection earlier. We see this happening on college campuses all across the country. It’s dangerous. 40% of Americans under age 35 tell pollsters they think the First Amendment is dangerous, because you might use your freedom to say something that hurts somebody else’s feelings.
Those are frightening and discouraging statistics.

YouTube is another supposedly neutral online platform—i.e., a non-news site, accepting all views (with the exceptions of those terrorist, violent, or other illegal activities we already agree on)—that has been censoring content based on political leanings. PragerU is involved in a lawsuit because YouTube deemed a number of their short information videos “unsafe for the community.” No profanity. No sketchy images. Nothing that couldn’t safely be watched by a 10-year-old. There seemed to be no standard by which certain videos were disallowed, so there was no way to “correct,” if there had been errors. But in the end, it looks like they were censored for having conservative political views.

Conservative comedians Steven Crowder and Owen Benjamin have been YouTube censored for much the same reasons. Owen Benjamin was on with Andrew Klavan today, and he quoted comedian George Carlin as saying, “Political correctness is fascism disguised as politeness.”

Fascism is statist tyranny. Snowflakes worried about hurt feelings need to get a clue: they’re line of thinking is what led to millions of people being killed by their own governments in the last century. But, then, I also read this today:

According to a new survey released on Thursday by the Conference on Jewish Material Claims Against Germany, fully 41 percent of Americans don’t know what Auschwitz was, including two-thirds of Millennials. Approximately 22 percent of Millennials had not heard of the Holocaust, and 41 percent of Millennials thought 2 million or fewer Jews were murdered during the Holocaust.
Ignorance is probably the result of “political correctness,” or, if you will, fascism, running amok in our education system. But it’s no excuse. We don’t have to get along with people who want to tyrannize us; we just need to stand up to the bullies. And educate them if there’s any openness in their minds to allow for it.

Why were those first Ten Amendments put in the Constitution? Because the founders had the foresight to envision a time such as ours, when people have forgotten what was supposed to be self-evident.

Posted by Spherical Model at 8:07 PM