Good and Evil Are Both Real

Late last night a man took aim from a 32nd story window in Las Vegas, shooting into a crowd of concert goers, killing 50 or more, injuring hundreds, maybe as many as 500 (estimates are still fluctuating). The perpetrator killed himself as a SWAT team entered his hotel room. Multiple rifles were found. Video footage from people in the crowd sounds like machine-gun fire; i.e., fully automatic weaponry, which is not available for sale. Eventually information should come out about where the murderer was able to obtain such weapons.


This was an act of terrorism. It was designed to kill as many innocents as possible. While ISIS claimed credit, there is no evidence of any connection, so that seems unlikely at this time. We don’t know if we will uncover a motive for such an evil act. What we do know is that murdering innocents is evil.


This morning, while covering this atrocity, Ben Shapiro was talking about evil. He referred to a book:  Evil: Inside Human Cruelty and Violence, by Roy F. Baumeister. In this book, the author talks about four types of evil, or motivations to do violence (I’m summarizing from Ben Shapiro’s explanation):

·         Instrumental: This is the idea that you have an object in mind, and you don’t care what means are used in order to gain that end. You want money; you don’t care that it’s not your money; you go to the bank and rob it, and if don’t care if you shoot somebody in the process. That is instrumental evil. Violence is just an instrument you’re willing to use to get what you want.
·         Ego-driven: Quoting Baumeister, “Violence is perpetrated by a subset of people who think well of themselves. And indeed it mainly occurs when they believe that their favorable images of self have been threatened or attacked.” This is what we’re seeing on college campuses where protesters commit actual violence because they think someone might say words they find offensive. They even call speech that disagrees with their views violence, to justify actual violence against those who disagree.
·         Ideological: This is the people who believe, for example, that communism justifies the murder of a hundred million people, because you’re creating utopia. If people would just succumb to your vision, they wouldn’t need to be wiped out of your way. It’s also what we see with Islamic terrorism, although that can also come under instrumental or ego-driven evil.
·         Sadistic: This is the idea that you enjoy violence, that you grew up from a kid who tortured puppies, and now you go out and you murder human beings.

Often we think of evil in that fourth category. Evil seems inexplicable. The Las Vegas shooting might turn out to be in that category. But this type is actually the least common.

Sadism requires a mind that has released a person from sensing guilt, allowing unfettered “enjoyment” of inflicting pain. Most of us aren’t likely to embody this type of evil. It’s rare, because most of us feel guilt when we do wrong; guilt, or conscience, stops us from committing evil. Shapiro also says it’s the only one of the four types we can profile against.

The other three are evils all of us mostly sane people are susceptible to. And the only solution to these first three types of evil--the only way to civilization--is moral education. We need to learn that the only justification for violence against human beings is self-defense.

Moral education teaches you that your desire for money, or some treasure, or some outcome must be subordinate to the safety of fellow human beings.

Moral education teaches you that your concerns about your identity, or your beliefs, are not that important. Disagreement isn’t an attack. As Shapiro says, “We have to stop feeling offended when we are disagreed with politically. We have to stop attributing evil motives to people who disagree with us, because then we’re more likely to become evil ourselves.”

Moral education teaches that your ideology isn’t worth killing people for. You want communism? Go to someplace people have already chosen that, or set up your commune on a private island somewhere. Don’t impose it by force on anyone. You want Sharia law? There are places you can live under that law; go there. You want your ideologies to win? Try expressing your reasons in a persuasive way. Imposing your ideologies on others is tyranny, and tyranny is evil.

We’re seeing evil in people’s reactions to the atrocity.

CBS legal executive Hayley Geftman-Gold tweeted that she felt no sympathy for the victims. Calling them “Repugs,” she said, “I’m actually not even sympathetic bc country music fans are often republican gun toters.” That’s evil. I don’t know whether you’d categorize it as ego-driven or ideological, or some combination. It was recognized as unacceptable, and she was fired for her comments. This person didn’t commit the atrocity, but she thinks people she judges as inferior (because country music = non-Democrat voter) are therefore worthy of being mowed down by machine gun. That way of thinking is evil. And evil thought comes before evil action.

Hillary Clinton and Tom Brokaw both claimed that the shooting was because of gun sales, which should therefore be denied to sane, law-abiding US citizens, since the shooter used guns that were ILLEGAL ALREADY. In fact, legal automatic weapons have been used in a total of three crimes since 1934. And atheist Richard Dawkins mocked, in a tweet, “Durn tootin’, great shootin’. Cool dude sertin’ he’s 2nd Mendment rahts. Hell yeah! / Every country has its psychopaths. In US they have guns.”  In other words, they used this sadistic violence to support their political ideology. While that is clearly multiple steps less evil than committing mass murder, it is using the murder—as though it is a good thing, because we should “never let a crisis go to waste.”

Not related to this incident, but while the rains were still coming down following Hurricane Harvey, a Florida sociology professor tweeted that the people of Texas deserved the death and destruction because they are evil GOP voters. (Note to the professor: Harris County, where the majority of flooding happened, went for Hillary Clinton.) He added later that Floridians who voted for Trump deserved any disaster that Hurricane Irma inflicted. That’s hate speech. It reveals that he thinks people’s lives are worthless if they do not agree with his politics. The professor did, by the way, get fired.

What do good people do when they see others going through tragic circumstances? They send love, prayers, and help—just like you saw in Houston following Hurricane Harvey. Here’s a suggestion of how to help the suffering in Las Vegas. And this: 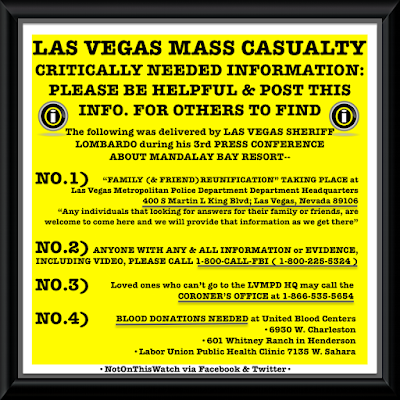 What do evil people do when they see others going through tragic circumstances? Decide whether or not the sufferers are people they hate, and if so rejoice in their suffering. If there’s room in your heart for that much darkness/evil, you really need to fill yourself with more light/goodness.

All I would suggest for everybody is that we focus in on how we cleanse our own hearts of the tendency to do evil things, how we look at the world. And that we think a little bit more about the fact that we’re all brothers and sisters in this fight against evil people. And we really need to focus together on how we can make our country a better place across the board without tearing each other apart over simple political disagreements.
The how-to for cleansing our hearts of the tendency to do evil would fill another entire post. But for now, let me suggest some of the goodness I filled my life with this past weekend. It was the semi-annual General Conference for my church, The Church of Jesus Christ of Latter-day Saints, with hours of one good, uplifting talk after another. Here are a couple that share the good:

Posted by Spherical Model at 10:09 PM