About the New Kind of Boy Scout

It was news, about a week ago, that Boy Scouts of America would now allow girls to participate in the Cub Scout program, and would soon make regular Scouting available, so that girls would have the opportunity to earn the rank of Eagle.

This may seem like “one more nail in the coffin” after previous announcements. (I actually saw that phrase, on Facebook, in response to the announcement.) But, personally, I’m cautiously optimistic.

Today I saw a video that clearly summarized the concerns of those who see this as one more nail. It’s worth looking at, before I share another view. This is news personality Liz Wheeler. Her video ends with this minute:

There’s a very simple reason cultural Marxists want to destroy the idea of gender. If we erase gender, that erases traditional gender roles in society. If we erase gender norms in society, that erases traditional relationships. If we dissolve man-woman relationships, that breaks down marriage. If we attack marriage, that destroys the family structure. If we lose the family structure, people all across the nation will be forced to resort to reliance on the government, instead of their families, for everything you can think of, A to Z. From emotional support to education. From financial assistance to morals, God, and friends. What happens when people rely only on government? 1984 happens. And the liberal government politicos who push this cultural suicide on us in the first place, now in a position of absolute control over every aspect in our lives, grow very very rich. Never underestimate the power of your voice in fighting these culture wars.
I agree with her about the culture wars. I appreciate the step-by-steps she outlines of the slippery slope. I’m also wary of changes to the Boy Scouts of America over the past several years—mostly due to pressure from the LGBTQ bully/lobby. And you can include the feminist lobby with that.

But this latest change isn’t exactly caving to the pressure—and much of the pressure wasn’t coming from where you might think.

First, the change to allow girls to join Cub Scouts, and eventually Boy Scouts—in addition to the older Explorer Scouts and Sea Scouts that have included girls for many years—does not put girls into the same Cub Scout dens along with the boys. It allows Packs to form dens specifically for girls, using the same program as the boys; or entire packs can form for girls. When the program eventually begins accommodating girls in Boy Scout troops, they will be in separate troops as well.

So, the Boy Scouts have succeeded in taking away an issue from the pressure groups, without taking away the opportunity for boys to be among boys.

And there is a plus for girls. On the ground, among families raising girls and boys and participating in scouting, parents have been asking for the Boy Scout program for their girls. Not to erase gender roles, but to provide something valuable for their daughters as well as their sons.

As the BSA announcement says,

The historic decision comes after years of receiving requests from families and girls, the organization evaluated the results of numerous research efforts, gaining input from current members and leaders, as well as parents and girls who’ve never been involved in Scouting–to understand how to offer families an important additional choice in meeting the character development needs of all their children.
Girl Scouts began about three years after Lord Baden Powell began Boy Scouts, in London. It was obvious, even 100 years ago, that what boys were being taught was valuable for girls too—preparedness, self-reliance, honor, self-control, or, as the Boy Scout Law and Oath, which differ slightly from Cubs to regular Scouts, but emphasize character traits that lead to civilization.

The Girl Scouts have similar Laws and other reminders. The Girl Scouts patterned themselves originally after the Boy Scouts, with some differences related to actual gender differences. But the two organizations have always been separately run.

There was a time when the Boy Scouts tried to serve girls through Campfire Girls, which also separated. They were popular in the past, but now, as far as I can tell, is too small now to meet the need.

Girl Scouts, as an organization, are up in arms. What the Boy Scout change does is pull girls away from Girl Scouts, and that offends them.

But, in my opinion, based on our experiences with both, the Boy Scouts has been a solid program, working hard to build boys into men, for a very long time. Girl Scouts has had some value, depending on how the local troop functions. But programs change. And the Girl Scout Gold Award—the pinnacle award, after earning the Silver  and Bronze Awards, with all their requirements—has never carried the social honor that the Boy Scout Eagle Award carries. 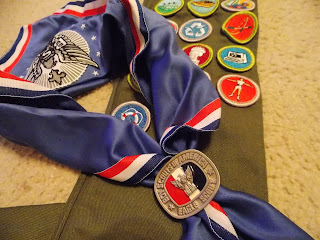 Our Brownie troop years were pretty good, and up until age 12. And we had some good camping experiences after that. But programs kept changing. Even the type of accomplishment marker kept changing—while boys have had badges you can put on either the uniform or on the sash, depending on what the item is, without much change. We got through the Silver Award with our daughter, but working almost entirely on our own. No one else was working toward any goal. There just wasn’t as much sense of purpose in meeting together with the troop.

My daughter, and many girls her age (mid-20s) look at this change and say they’d have loved to have had the Boy Scout program, back in their growing years.

And parents would like that too. Sometimes it’s just a matter of convenience for the family. If they can coordinate just enough to have the same day or nearby location for meetings, that would help.
In reality, there are churches and schools that sponsor both Boy Scout and Girl Scout troops, and sometimes they meet at the same time, in nearly the same place—such as at different tables in a school cafeteria. Where that’s already happening, there’s not much incentive to form new Boy Scout troops for boys. But where families are serving in their Boy Scout troops and can’t find what they need for their daughters, this is good news. And it’s very pro-family news. And very pro-civilization.

In our church, the largest Church sponsor of BSA, there has always been a parallel program for girls—and for boys around the world, wherever Boy Scouts are not a viable option—there will be no LDS-sponsored dens or troops for girls. And that will continue to be the choice of the sponsoring organization. The program for Young Women has an ultimate award, the Young Womanhood Award, which we tried to give the respect it deserves. But I’m sorry to say it has never received as much respect as earning the Eagle Scout rank. That was one of the reasons we tried Girl Scouts in addition.

I hope the BSA is right, that this is just a better way to serve families. And that it will remove the incentive for attacks from the pressure groups. I hope they’re right, because we’re in greater need than ever of ways to bring up our children with the values of civilization.
Posted by Spherical Model at 6:21 PM