I’m finding Henry Hazlitt’s Economics in One Lesson rich in application for our day. Here’s the beginning of Chapter VI, “Credit Diverts Production”: 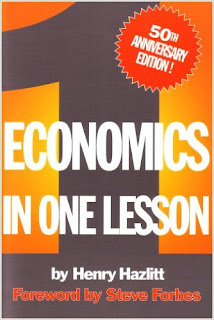 Government “encouragement” to business is sometimes as much to be feared as government hostility. This supposed encouragement often takes the form of a direct grant of government credit or a guarantee of private loans.
Hazlitt spends most of this chapter talking about loans to farmers. But we can extrapolate this example to similar good-intentions-with-bad-outcomes that government proposes. I’m thinking about home loans to people whose incomes didn’t qualify, which led to the housing bubble of nearly a decade ago. And it probably applies to government school loans, or any other scheme to make college available (and supposedly affordable, or maybe even free) to everyone. And of course the Affordable Care Act and any other interference in the health care industry.

The overarching principle is that government only gets money from taxpayers, and then government uses money as if they have a right to it, but no responsibility for wasting it.

As I’ve said here before,

Whenever government attempts something beyond the proper role of government (protection of life, liberty, and property), it causes unintended consequences—usually exactly opposite to the stated goals of the interference.
So, here is a good chunk of chapter VI, with Hazlitt explaining what happens:

On the other hand, trusting the free market, while concentrating our efforts on being better, more compassionate individuals, might just work out those perceived issues.

[ii] I the retell this story on the Spherical Model website, in the Economic section, under the heading “Free-Enterprise Zone.” [   http://sphericalmodel.com/theeconomicworld.html   ] I first heard this Davy Crockett story from Nina Hendee, who tells Texas history stories to school groups at the family restaurant Taste of Texas. I later found the full story: “Not Yours to Give,” originally published in The Life of Colonel David Crockett, by Edward Sylvester Ellis, republished at http://juntosociety.com, © 2002 The Junto Society.
Posted by Spherical Model at 6:27 PM