We had a guest come for dinner the other night, from Kuwait. She is an electrical engineer working for an oil company, over here for training with Mr. Spherical Model’s company. And while she’s here, she wants to experience American culture. So we let her experience Halloween, including answering the door to little people in costumes, getting candy handed to them. 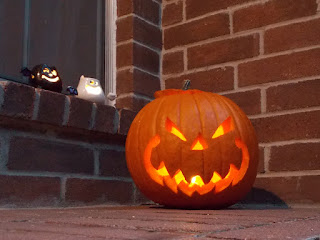 And we had time for conversation, between doorbell ringing. I will call her Ginn.

It’s always interesting to get the perspective of people visiting America. Kuwait is a friend to the US, since well before the Gulf War. And yet it is in the Middle East, where people, customs, and cultures are quite different—and their news sources are not necessarily friendly toward us.

Kuwait has an elected parliament. In theory this seems like a good thing. But in reality, it hasn’t led to more freedom, Ginn told us. Kuwait used to be a liberal Muslim country. Note: liberal in this context means less rule dominated, more open to variety in dress and lifestyle and belief. They allow women to drive (at least since the Gulf War). Women attended university classes with men—now they are separated. They are still allowed to shop at malls with men and women present, which isn’t allowed in Saudi Arabia generally, at least without male family members escorting any shopping women. They have a full variety of women’s dress, from all Western clothing, to Western clothing with hijab (head scarf)—which was our friend’s way of dressing—to full-length Eastern clothing, to full black burka. But pressure is growing toward more limitation.

The Parliament has been changing over the few decades it has existed, because of immigration. People from Saudi Arabia, whom she referred to as Bedouins, tent dwellers, have been invited to come in and get citizenship. These were much more religiously conservative (opposite of liberal) than the rest of the country.

There are two main branches of Islam: Shia and Sunni. She is a Shiite. The incoming immigrants were Sunni. This schism has existed since almost immediately after Mohammed’s death. I do not know the details, or really all the locations. But at least nowadays, much of Saudi Arabia is Sunni, much of Iraq is Sunni. Iran is Shia. Kuwait was more Shia, but it is now about equal, and trending toward Sunni with more immigration. In the world at large, I think she said about 2/3 of Muslims are Sunni, and 1/3 are Shiite.

She believes the Shiites are more reasonable, more modern, and more open. I don’t know how to generalize that. I remember a conversation with a young Sunni woman living here in Houston, who said Sunnis are open to any Muslim to come to their mosque, but Shiites won’t allow Sunnis to come to theirs, which made finding a place to attend more difficult for her. I think I have found that orientation more often than Ginn’s point of view. But I’m an outsider; I really don’t know.

Among the two types, there are also variations. In Saudi Arabia, the Wahhabis are the more controlling version, and that is spreading wherever they migrate to.

What Ginn described was a concerted effort to bring in immigrants who would be expected to vote a certain way—the Wahhabi way—so that their way would gain influence in Parliament. She thought that was worse than having a monarchy, which could at least be expected to maintain their previous freedoms.

We could see the parallel in our own country. Any country that wants to maintain its culture, and its freedoms, expects immigrants to become assimilated to that country’s culture. So encouraging an influx of low-income, uneducated, desperate aliens who can quickly gain citizenship and voting rights is a danger to the existing country and its culture. That seems obvious. It’s what our friend Ginn is seeing in her home country. It is what we see as a looming reality here in America.

In both cases, it looks like an actual plan of those who encourage the influx to do so with the intention of altering the culture and gaining power for a particular voting party—so that they can transform the existing country into something other than what it was.

A country that cares about its culture and survival wants its immigrants to be educated, skilled, and law abiding, with a desire to adopt the laws and culture of the country. They can bring their foods, crafts, and personality with them. But they shouldn’t be invaders overtaking a country; they should be willing to change, to adapt, and to adopt the new country as their own.


Conservatives in this country—those of us who want to conserve our Constitution, and the rights it protects—aren’t against immigrants. We welcome immigrants. We’re against invaders.
Posted by Spherical Model at 2:07 PM