“Of all sad words of tongue or pen, the saddest are these, 'It might have been.”—John Greenleaf Whittier

We don’t get to live parallel lives, to see what would have happened if other choices had been made. So I don’t intend to spend a lot of time in regrets. But maybe it’s instructive once in a while to re-examine circumstances and choices. 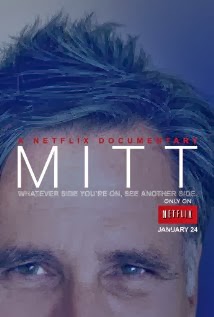 Last week I heard radio host Hugh Hewitt interviewing Mitt Romney about the documentary, Mitt, just released on Netflix. [The transcript of the interview is here.] Which got me to go home and watch it.

What you see in the movie is a man who is perfectly suited, in temperament, in integrity, in ability, to address the specific problems our nation has been facing. He offered to help; he would have been glad to tackle the problems. But he was personally fine with not being required to do it. The heartbreak is for the nation, not for himself.

For me, there were no surprises in the documentary. I watched many short pieces on Romney during the two races, and I’ve followed him for a long time. I knew who he was, what he was like. I don’t know when I’ve known any candidate so well. [During the campaign, I wrote about him, a seven-part series starting here, as well as here, here, here, and here.]

But in my own local Tea Party, where people often listen to me respectfully, most people called him too liberal, too much of an insider, and too disconnected from regular people. Absolutely wrong on all accounts. In 2007-2008, the party insiders saw to it that the “progressive” McCain got the nomination. Romney was not a Washington insider, but he was the most conservative in that primary field, which was represented as a flaw.

His positions remained constant. He responded by helping wherever he felt he could be useful. He would have been content doing just that. His wife, Ann, who believed after the first defeat that they never wanted to do that again, was the one who pushed him to run the second time—because the country needed him.

Obama was even worse than many anticipated, and that got a lot of people to wake up, start re-reading the Constitution, and start getting involved. That’s how the Tea Party was born—individuals waking up and asking, “What can I do to make things right?”

Coinciding with the rise of awareness of conservative principles was also a matching distrust of anyone who contributed to getting us into this mess. So a lot of people new to politics were disposed to distrust anything that comes through traditional channels. Sometimes they’re right about that, but sometimes this predisposition causes them to dismiss the long years of effort for the conservative cause that many people have offered.

So coming in as an experienced “outsider” meant Romney had to pay his dues in the national GOP. Fine. He was always a willing helper. But doing exactly what would be required suddenly turned him into an “insider” who must therefore be distrusted.

Nothing bothered me more during the last campaign than fellow conservatives complaining that Romney was a bad candidate.

In the Hugh Hewitt interview, there’s this exchange:

Hugh Hewitt: There was a segment of Mitt where you’re talking in 2008 about being branded as the ‘flippin’ Mormon.’ And you say I won’t fix the Mormon part. You’re proud of your faith. And I can’t fix the flip-flopper thing. They’ve got to stop buying, I think this is a direct quote, the dog food that’s been shipped to you by McCain. That is a problem of all American media. I mean, Governor Christie right now is getting branded, and I don’t know what he does about it. What’s your advice to Governor Christie to avoid getting branded as you did in ’08 and ’12?
Mitt Romney: Well, you’re right, Hugh, and I look back at someone like, and I said on the film as well, I was talking about Dan Quayle, and said you know, they branded him as someone who wasn’t bright. And actually, he’s a very bright person, a very capable investor and manager of a large investment firm. They used to joke about Jerry Ford, you know, a stumblebum, uncoordinated. Actually, he’s the only American president who’s an All-American. I mean, they completely can get these things wrong, but they brand people. The opposition party obviously wants to do that, and sometimes, the media wants to play along with it, I’m afraid. And when that happens, you’ve got to say okay, what can we do to try and correct that? And it’s hard to do.
The result of this media branding showed up yet again at our last local Tea Party meeting. There’s someone challenging our county party chair, an unpaid position. I’m open to arguments about that. I think in general our party chair has done a decent job, except for recruiting enough precinct chairs. But there are always things I don’t know. And a friend who often knows more than I do recommended this challenger. So I listened. First, he didn’t convince me that change was needed for any reason other than the “throwing out the insiders” argument. And second, he complained, “Mitt Romney wasn’t the best candidate to talk about conservatism.”

Actually, Romney was the best to talk about it. He had tackled the liberal mess that was Massachusetts, worked with an 87% democrat legislature, and moved the state from drowning in debt to in the black. He worked miracles—using conservative principles, talking about them using data that persuaded even democrats to do the right thing. No one else in the race had such a record, or even much executive experience.

So this candidate for our county GOP chair was unaware of Romney’s record, apparently hadn’t heard or read his speeches—and noticed their conservative consistency over time—and taken a look at the long line of people who have worked with him or known him and consistently attest to his connection with normal people and dedication to living a civilized life. This candidate was instead willing to go with the unfortunate combination of lies put out by mainstream media, spin put out by his primary opponents, and jaded dismissal by zealous but not fully informed newcomers. Instead of finding the truth. This is a common error on our side that ought to be corrected.

One caller to Hugh Hewitt’s show, Joe from Houston, added this data:

I just wanted to say that I think the rejection of Mitt Romney by the American people will go down in history as probably the greatest political mistake we’ve ever made. And one of the criticisms I hear from people that don’t know any better is that Romney wasn’t a conservative, wasn’t conservative enough. In the 2012 election 35-38 % of the voters identified themselves as conservatives—the most in any election in political history. And Romney got over 82% of the vote of those people who voted for him. He got more self-identified conservatives to vote for him than anyone, including Ronald Reagan and George W. Bush. So that’s a canard that needs to be put to bed.
Another Hugh Hewitt caller, Tammy J of Portland, said this:

I just started watching the show, and then I had to stop, because I had to listen to your interview of Mitt, and all I can say is, I am just sick to my stomach when I think of the direction our country could have been in had he been elected. And I think, going forward, the lesson we need to take from this is, we cannot take for granted that the media will do us any favors. We have to use new media. We have to use digital media—everything we can to end run mainstream media. They control the debate; they control the narrative.
She’s right; we need to go into the next round with the expectation that alternative sources are the way to go.

Ann Romney was interviewed on Fox News, about the documentary, and said this:

I was with Ann; I knew what he was capable of, and I knew how much the country needed him. I also felt calm about it being in the Lord’s hands. At the time I interpreted that to mean he would win, because that was what we so needed. So I had to combine the surety that it was in the Lord’s hands with the certainly that things would get worse for the country—the reality we have seen and continue to see. For some larger purpose, to bring His people back to Him, that I can't fully see yet.

In the last presidential election I thought we had the starkest contrast possible, between “liberal” failure and conservative solutions, between social decay and civilization. Yet the message didn’t get through.

I have my doubts that we’ll ever see a candidate so suited for the job of president, and such a fine human being besides. But we will have someone who contrasts with the current failure. Whatever that person’s story is, I hope we can help make it known, so the contrast will be obvious even to those who were fooled last time.

Posted by Spherical Model at 2:30 PM