Last winter I came across a piece about predicting presidential campaign winners based on who smiled the most, or essentially who inspired optimism for a positive future. I wrote comparing the primary candidates in January. The comparison is becoming more obvious as we approach Election Day.
This cover showed up in the Des Moines Register yesterday, illustrating this very point. 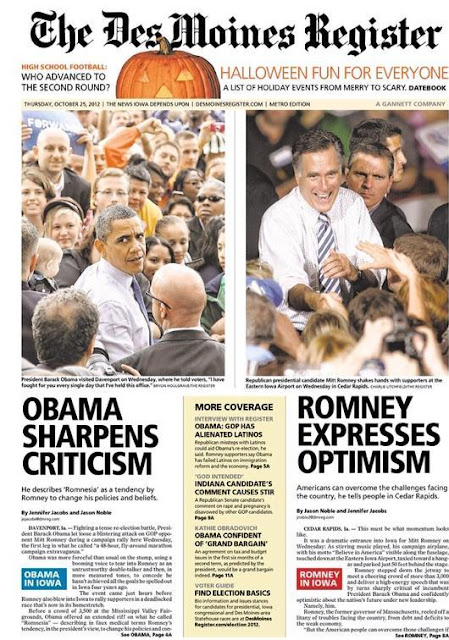 It is becoming a theme here that I have been praying for clarity, for Americans to see clearly who the President is and who Mitt Romney is, so that their decision will be based on reality and not deceit. I think that is what we are seeing, more and more.

Peggy Noonan has a piece today describing what happened at (and since) the first debate as Americans finally see the real Obama:


People saw for the first time an Obama they may have heard about on radio or in a newspaper but had never seen.
They didn't see some odd version of the president. They saw the president.
And they didn't like what they saw, and that would linger.