The Purpose of Education

I’ve been putting together a presentation for this coming Saturday. At our Tea Party, we’re spending two consecutive meetings on education issues. My part will be on homeschooling. The beginning segment is about the purpose of education, and some history of education. Since that’s where my thoughts are today, I might as well give a preview here.

The purpose of education, according to Aristotle, is to produce a great soul. 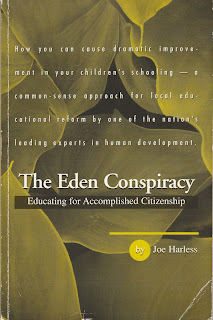 Joe Harless, in his book The Eden Conspiracy, says education should be about producing an accomplished citizen. It should teach the knowledge, skills, and information relevant to becoming accomplished members of society.

What should an accomplished member of society be accomplished at doing—regardless of how the person makes a living?

·         Obedience to the law.
·         Informed voting decisions.
·         Contributions to stability.
·         Resolution of interpersonal conflict.
·         Contributions to community improvement.
The Northwest Ordinance, one of our lesser known founding documents, written in 1787, the same year as our Constitution, says “Religion, morality, and knowledge being necessary to good government and the happiness of mankind, schools and the means of education shall ever be encouraged.”

So the purpose of education, then, is to teach religion, morality, and knowledge so that we can have good government and happiness.

Note that encouraging schools and the means of education did not mean government provided it, only that it would offer a gift of land—after surveying, one 16th of the land would be sold to private owners, and the proceeds would be used “within that township” to help with the building of schools. No state or national oversight. No ongoing support. Simply a one-time grant to encourage building schools.

So far we’re using different words, but we’re pretty much in agreement about what we want schools to do. 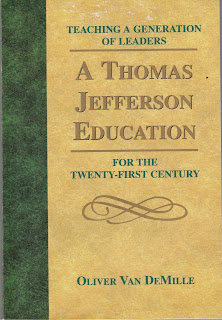 According to Oliver Van DeMille, in A Thomas Jefferson Education, there are three types of
education, each with its particular purpose:

First, public education. It’s intended to prepare a person for a job, or for servant labor. It teaches what to think. It is implemented in cultures to give opportunities to the poor, to lift them from being a burden on society. The downside—everywhere it had previously been tried—is the deterioration of other education, which can’t complete with “free.”

Second, profession education. It’s intended to prepare for trade, often through apprenticeship, for skilled artisan work, and for law, medical, MBA, or other professional training. It teaches when to think, or under what circumstances to use their specialized training. So, the purpose is to create expertise. It meets this goal, but it is not a substitute for leadership training.

Third, leadership education. It’s intended to produce leaders in home and communities, entrepreneurs in business, statesmen in government. It teaches how to think. So it trains thinkers. It develops character, competence, and capacity to do the right thing—and to do it well—in business, government, church, school, family, and other organizations. It perpetuates freedom.

Historically, for thousands of years, those with resources provided home tutoring, often followed by trade apprenticeship and professional training. Meanwhile the poor got whatever minimum was necessary to make them useful—usually emphasizing physical labor over brain labor.

Public education—that first type, for preparing the poor for service labor—was first tried in America during a time when many immigrants were working in factories, and their children were left to wander the streets. This coincided with the industrial revolution.

In comes Horace Mann, an atheist “progressive.” He said,

What the church has been for medieval man, the public school must become for democratic and rational man. God will be replaced by the concept of the public good…. The common schools… shall create a more far-seeing intelligence and a pure morality than has ever existed among communities of men (quoted in Christopher Klicka, The Right Choice—Home Schooling, p. 32).
Within two generations, Mann's ideas flooded the nation. There was the problem of large numbers of poor students from uneducated families. He offered the factory model. Subjects were separated, rather than integrated. Timing was determined by ringing bells, just like in the factories. Schools were top-down authoritarian. Uniformity was paramount.

Then along came John Dewey—of Dewey Decimal System fame. In 1916 he published Democracy in Education. He’s more or less the father of “progressive” education. He had plans to “revolutionize” child training. “Self-realization” became the goal instead of “learning.” He gave no more than a casual nod to teaching English grammar, ancient history, US history, geography, classics of Western civilization, or science.

He looked upon the schools as a wonderful opportunity to indoctrinate America’s youth in the “virtues” of a glorious age where private property, the free market, open competition, and profits would all be eliminated.

What was his background? He got his PhD from Johns Hopkins, studying under G. Stanley Hall—a disciple of German socialist Wilhelm Wundt. Dewey visited the Soviet Union in the 1920s. He failed to recognize the revolutionary desolation and widespread destruction of human values, and instead described it as “a popular culture impregnated with esthetic quality.”

According to W. Cleon Skousen, in The Freeman’s Digest, May 1984, “Today we are reaping the tragic results of the pedagogical misery that America inherited from Dewey’s misadventure in experimental education.” As he explained Dewey’s history before that Soviet visit,

Long before, in 1904, he had joined the faculty of the Teachers College at Columbia University. He had then teamed up with James Earl Russell, the dean of the Teachers College, who was also a student of Wilhelm Wundt, and together they had worked for a quarter of a century diligently building this branch of Columbia University into the largest institution in the world for the training of teachers. By 1953, about one-third of all the presidents and deans of teacher training schools in America were graduates of Columbia’s Teachers College.
One of his contemporaries, Dr. Robert M. Hutchins, saw through the scheme to its logical consequences:

The disappearance of great books from education and from the reading of adults constitutes a calamity. In this view, education in the West has been steadily deteriorating; the rising generation has been deprived of its birthright; the mess of pottage it has received in exchange has not been nutritious; adults have come to lead lives comparatively rich in material comforts and very poor in moral, intellectual, and spiritual tone (Great Western Books, vol. 1, preface; pp. xii-xiii). 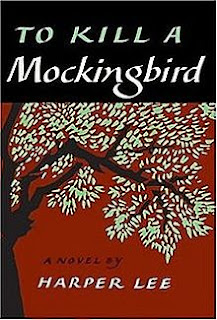 I may have told this story elsewhere, but there’s a segment of To Kill a Mockingbird, where the young protagonist, Scout, describes her disappointment with school. Her description of the first day of first grade (no kindergarten back then) is worth retelling.

Scout’s teacher discovers that she not only knew the alphabet, but she could read all the readers and The Mobile Register (newspaper), which she had learned naturally just by sitting with her father and reading together in the evenings. The teacher says,

“You tell him I’ll take over from here and try to undo the damage—”
“Ma’am?”
“Your father does not know how to teach. You can have a seat now.”
I mumbled that I was sorry and retired meditating upon my crime. I never deliberately learned to read, but somehow I had been wallowing illicitly in the daily papers (p. 22 of my copy).
Apparently John Dewey was to blame. She goes on:

The remainder of my schooldays were no more auspicious than the first. Indeed, they were an endless Project that slowly evolved into a Unit, in which miles of construction paper and wax crayon were expended by the State of Alabama in its well-meaning but fruitless efforts to teach me Group Dynamics. What Jem [her brother] called the Dewey Decimal System was school-wide by the end of my first year, so I had no chance to compare it with other teaching techniques. I could only look around me: Atticus [her father] and my uncle, who went to school at home, knew everything—at least, what one didn’t know the other did. Furthermore, I couldn’t help noticing that my father had served for years in the state legislature, elected each time without opposition, innocent of the adjustments my teacher thought essential to the development of Good Citizenship. Jem, educated on a half-Decimal half-Duncecap basis, seemed to function effectively alone or in a group, but Jem was a poor example: no tutorial system devised by man could have stopped him from getting at books. As for me, I knew nothing except what I gathered from Time magazine and reading everything I could lay hands on at home, but as I inched sluggishly along the treadmill of the Maycomb County school system, I could not help receiving the impression that I was being cheated out of something. Out of what I knew not, yet I did not believe that twelve years of unrelieved boredom was exactly what the state had in mind for me (p. 37).
Maybe it’s time we re-think what is normal.

In six thousand years of human history, children have been brought up and taught by their parents. Turning that responsibility over to the state is a social experiment—an undeniably failing experiment—begun only about a century ago.

While we homeschoolers may look radical to the people around us who don’t know anything different from government institutional factory-like schools they grew up with, we are the ones following the traditional pattern.

We homeschoolers are the ones doing leadership education. We’re the ones teaching how to think.

And insofar as we do well in teaching the knowledge, skills, and information relevant to becoming accomplished members of society, we’re producing great souls.

My kids were worth it.

Posted by Spherical Model at 10:22 PM