An Age of Populism 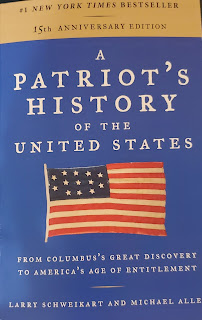 This past Saturday we had a specially scheduled extra Tea Party meeting to hear from author/historian Larry Schweikart. He’s the author of A Patriot’s History of the United States, published back in 2004. It was a NYT #1 bestseller, but that didn’t happen until 2010, after Glenn Beck talked about it multiple times on his show. Six years after publication. It was kind of a shock for an academician used to never selling more than a boxful of books.

He has written several other books, and is on tour now with the biography Reagan: The American President. There are other bios of Reagan; why do another? Dr. Schweikart says it’s because the others didn’t get to who Reagan really was. He says, “Reagan was the guy you saw on TV. He bled red white and blue.” That was not an act or a public face.

As an actor, Reagan definitely wasn’t a “method actor.” He knew how to be himself, but he didn’t like portraying someone he wasn’t. He only once portrayed a bad buy. But he did have two good roles: the dying George Gip, the Gipper, in Knute Rockne—he had played football and that was real to him. And the other was Kings Row, in which he plays a man who started as a wealthy socialite who loses his money and has to do labor. His legs are crushed in a railroad yard accident, and a sadistic doctor assures him they’re operable but then amputates the legs unnecessarily out of hatred. Reagan’s character is embittered and despondent for much of the movie, but when his friend tells him what actually happened, he responds with defiance. Did the doctor think he lived in his legs? He recovers his spirit and renews his will to live.

Dr. Schweikart, and many people, believe Reagan deserved an Academy Award for that role, but Spencer Tracy won that year.

There are other actors who are best playing characters like themselves. John Wayne was one. (Coincidentally, they both had the nickname Duke.) John Wayne also avoided playing bad guys. Whoever he played, he was visibly John Wayne playing that role—and we liked seeing him do that. Reagan’s acting method was like that. It’s different from Johnny Depp, or Tom Hanks, or Meryl Streep. But we’re OK with that. 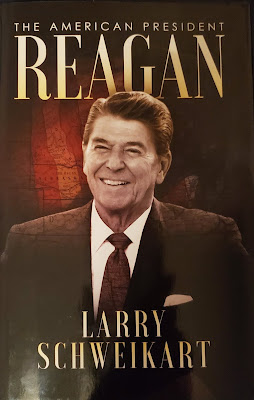 His experience in media—which included sports announcing, and hosting Death Valley Days (history stories I remember watching weekly as a child), in addition to acting—helped him appear at ease in front of a camera. He knew how to speak directly to people, so the media didn’t have to (didn't get to) filter what he meant through them. That was something relatively new, for a president. FDR started fireside chats on radio, but wouldn’t have translated well to television. JFK was the first to benefit from television. But Reagan was the first to handle television and other media platforms with comfortable ease.

He had a simple approach to being president—two goals that very few people believed were possible, but he believed them and said so, and they connected with the American people:

1.       Defeat the Soviet Union.
2.       Build the economy.
The two goals were intertwined, according to Dr. Schweikart. For example, “The Soviets exported vodka, gold, oil, and spies. They still do.” So Reagan set out to control inflation, no matter the cost. By 1982 inflation dropped to zero. From 7-8%. That dropped the price of gold. Then Reagan met with oil dealers in Saudi and told them to burn their reserves, to control prices. The Soviets were outraged, because this affected their ability to sell their oil. Without money, they floundered in the Cold War.

Reagan allied with Pope John Paul II to do an end run around the Soviets. Together they increased funding to Radio Free Europe and Voice of America, pumping in rock music—which is the music of freedom. (Dr. Schweikart recommends a video on this: Rockin’ the Wall: How Music Ripped the Iron Curtain.) Rock music made Soviet people want to be like Americans—and even want to be Americans.

Reagan was out of office by the time the Berlin Wall fell, but ending the Cold War—that was Reagan’s doing.

There are plenty of other stories. But I’m interested in some connections Dr. Schweikart made during the Q&A, about populism, which is something I don’t understand. I think our country works best when the people are good citizens, educate themselves on issues and candidates, and then make informed decisions when they go vote. I do that; I do my part.

But the outcome of voting depends on swaying those who haven’t done their study and due diligence.

There are people who make comparisons between Reagan and Trump. Their personalities and characters are quite different. But both of them understand the media really well. They both lived and worked in media before ever entering politics. And the public knew them through their media appearances long before getting acquainted with their politics.

Trump has also had a fairly simple message/plan:

·         Secure borders.
·         Appoint constitutionalist judges.
·         Lower taxes and roll back over-regulation to improve the economy.
These things, he told us directly, would Make America Great Again. He'd have none of this managing a superpower in decline, like Obama was doing. As Carter was doing before Reagan, too—another parallel.

I recall that my household was for Reagan in 1968. (Fun fact: the political pundits of the day thought he was too old to run in 1968.) We watched his speech at the Republican National Convention on TV. My dad was into politics, and even ran for office once. My mom wasn’t interested in politics—but she was interested in Ronald Reagan—whom she knew from movies and TV, and he was so handsome. (Another fun fact, or rather, personal opinion: my dad had a similar look, although blond—thick hair, rosy cheeks, similar face shape, at least in his younger years.) Anyway, it’s my experience that there was a good portion of the electorate, from at least the 1960s, who selected their candidate based on his popularity—his name recognition plus personal appeal to the common people. 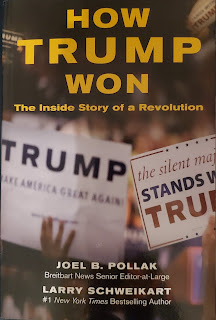 Dr. Schweikart wrote a book called How Trump Won—which he wrote before the election. He knew what was coming when most of the media did not. I intend to read it, but I gather his theory is that only a populist candidate can win in today’s America.

The Democrats don’t have a populist candidate. That’s why their ridiculously large field is flailing. When asked who he thinks their nominee will be, he says, “She’s not in the race—yet.” People suggest Michelle Obama. Good guess, because she does have a sort of populist appeal. But he believes she’s not interested in politics or actually running the country. No, he’s predicting Hillary Clinton. Because she’s obsessed, and feels entitled. And certainly has the name recognition the others don’t.

I hope he’s wrong. I don’t believe she could win; I just don’t want to see her in front of our faces ever again.

But he made another somewhat wild prediction: Who will be the Republican nominee in 2024? Kanye West.

I did not see that one coming. Again, I hope he’s wrong. I’ve been paying attention, and I’m aware of Kanye West’s conversion to Christianity, and somewhat to conservatism. He seems sincere. People report that there’s true humility there. I’d much rather that than anyone the Democrats would put forward. But I prefer someone with a track record of living a Christian life through some hard times and still sticking with it. And I prefer as a president someone who is so well-versed in the Constitution that they could chat with Thomas Jefferson, James Madison, Alexander Hamilton, and John Jay, and add his own federalist paper to their conversation. I don’t expect a person dedicated to writing and promoting his music will be spending sufficient time on economics and foreign policy to qualify.

I didn’t think Trump had either. But at least economics was his bailiwick.

But populism counts, Dr. Schweikart is convinced. For example, there may not be a person under 40 in the United States who doesn’t know who Kanye West is. Only a fraction of that large demographic have any idea who Mike Pence is—even though he’s the vice-president.

Populism requires a candidate who connects with young people who are not paying attention to politics. You’ve got to have someone who speaks their language, and appeals to what they’re thinking about—while convincing them that freedom, prosperity, and civilization are preferable to tyranny, poverty, and savagery disguised as “free stuff” that someone richer will pay for.

Dr. Schweikart told us to write down his predictions, and we'll see if he can stand by them. By the way, Kanye said on radio a year ago, “When I’m president…” referring to after 2024. It’s actually on his mind.

It’s a short wait to find out if Dr. Schweikart is right about Hillary Clinton. I heard on radio today that she has only until around the 15th (or maybe 18th) of November to get on the ballot in one of the earliest primary voting states.

While I had a historian handy, I asked, how do we keep our history, keep truth? He said that will be the fight of the next 5-7 years. The dinosaur media is being pushed out. New media, including online media is taking over. We need to write. And we need to make videos—to reach the youth. We need to be involved in popular culture.

As the late Andrew Breitbart said, “Politics is downstream from culture.” So, if we want to have a say in how we're governed, we have to contribute to the culture.

I don’t know how to do these that. But I hope there are people out there who do. Because apparently our future depends on what younger people watch, hear, see, read, and pay attention to.

Posted by Spherical Model at 8:36 PM