When I was young, my Church leaders defined pride in the scriptural way. As President Ezra Taft Benson said in 1989, “In the scriptures there is no such thing as righteous pride﻿—it is always considered a sin. Therefore, no matter how the world uses the term, we must understand how God uses the term so we can understand the language of holy writ and profit thereby.”[i] This talk led us to try to change our language. It became awkward for some time to say we were proud of our children when what we really meant was, as scriptures would say, “my son, in whom I am well pleased.”

Latter-day Saints are not the only ones who have the idea pride is a bad thing. In Catholic philosophy, pride ranks up there alongside greed, lust, envy, gluttony, wrath, and sloth, which make up the “seven deadly sins,” which together are opposite the “seven heavenly virtues”: prudence, justice, temperance, and courage (the four cardinal virtues) plus faith, hope and charity (the three theological virtues).[ii]

Yet it still seems like a good thing to tell your child, “I’m proud of you for getting good grades” or “for sticking up for your little brother,” or for some similar good reason. 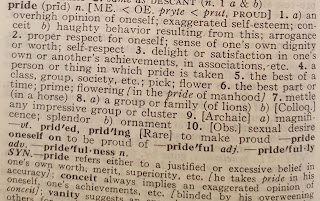 My dictionary offers both the scriptural term—always negative—and the worldly term, which can be somewhat positive, depending.

1.     a. an overhigh opinion of oneself; exaggerated self-esteem; conceit
b. haughty behavior resulting from this; arrogance
That first definition is pretty negative. That’s what "cometh before the fall.” It leads to nowhere good.

But there are these additional definitions that are pretty common outside of scripture:

2.       proper respect for oneself; sense of one’s own dignity or worth; self-respect
3.       delight or satisfaction in one’s own or another’s achievements, in associations, etc.
4.       a person or thing in which pride is taken
5.       the best of a class, group, society, etc.
I’ve been trying to figure out how it’s used in the celebration called “gay pride,” for which June is supposed to be the month.

In April the valedictorian’s speech at my alma mater, Brigham Young University, got some notoriety, because Matt Easton came out publicly as gay during that speech. In his announcement, he said, “I stand before my family, friends, and graduating class today to say that I am proud to be a gay son of God.”

I don’t know the young man. But the assumption is that he has been abiding by the honor code, which requires, among other moral requirements, no sexual relations outside of marriage. He hasn’t been living a typical gay lifestyle; he has been living a typical Latter-day Saint lifestyle. As long as he continues to obey God’s commandments concerning chastity, he is as welcome and integrated in the Church as any other member.

I’m glad he was able to achieve the significant honor of valedictorian at a school where that really means something. He must be very bright and very hard working—along with being very civilized in his behavior.

I hope he can continue to live a good life. But I am concerned for him.

Shortly afterward he did an interview on Ellen. I like Ellen DeGeneres. She’s funny and personable, and only rarely brings up her sexual orientation. But it was somewhat pertinent in her interview with Easton.

The interview appeared to give the impression that, now that he’s graduated, he’s free of the somewhat draconian behavior controls of the Church-owned school’s honor code and its fear-inducing threat of expulsion over any perception of misbehavior.

There has been some criticism of the department that deals with honor code issues at the university lately, leading to some adjustments. Those seem to me more related to procedures than with the actual honor code itself. Expulsion is occasionally necessary, but mainly for flagrant violations with little intention of repentance. Temporary suspension, possibly leading to a semester being repeated, would be more likely for serious lapses. Every Latter-day Saint student is assigned to a congregation, with a bishop who has an honest desire to help any young person with spiritual struggles—of which an honor code violation of any kind would be a signal.

In the Ellen interview, Easton seemed to be expressing his fear that, if he had so much as hugged a team member after a win in sports, he could have been reported to the office and expelled. That is so far away from the intent of the honor code that I can only assume his was a self-imposed fear. Two heterosexual young men who hug under that same condition would feel no fear—because the behavior and intent are both innocent, even positive.

Easton says that, now that he has graduated, he intends to participate more fully in the LGBT community up north in Salt Lake City. He does not say that he intends to break his covenants to God. And I hope, for his sake, that he can maintain his faith and his behavior as he has done thus far. But I think Ellen’s audience will think otherwise—that he will “be authentic” by pursuing same-sex relationships, since that’s “who he is.”

How does this relate to pride? He said he was a “proud gay son of God.” He might mean that he’s proud—i.e., has a sense of his own dignity and worth—to know he is a son of God, even though he happens to have same-sex attraction. But I think the more common understanding is that he’s proud of his gay-ness while also being a son of God.

When we’re talking about the positive reasons to be proud—because of accomplishments, achievements, or things to take delight or satisfaction in—I’m not seeing gay-ness as such a reason.

Is it an accomplishment? If it is an inborn trait, as so many claim, then no. That would be like being proud of being born in a particular year—a matter of chance, not personal accomplishment. If it is not inborn, then what is accomplished by choosing it, or failing to overcome the tendency? Sterility? Having only 2-3% of the population to share attraction with?

Remember, if pride isn’t tied to accomplishment of something good, it’s that negative definition: an overhigh opinion of oneself; exaggerated self-esteem; conceit.

Pride month seems to require the rest of society to “signal” their “virtue” by also being proud of people with LGBTQ issues. But for what?

I suggest that the subject is intended to resist deeper thought. Instead, there’s supposed to be a gut-level response, a society-wide understanding that there’s this entire demographic of people who have been oppressed, and forced to hide “who they are.” And so, in a stand of solidarity with them, we’re supposed to tell them to shout their proclivities from the rooftops and cheer them on as they do so.

But why? So we can feel better about ourselves for no longer having that prejudice against them? When we never did? When we have believed in fairness, kindness, and respect for all people all along? But now we’re required to not only want those basic human rights for them, but to support special rights for them. And if we don’t, we’re subjected to being made pariahs, and having our basic freedoms taken away. We’re supposed to signal that capitulation by waving rainbow flags and honoring them as though they’ve accomplished something akin to—an accomplishment.

I was first introduced to a gay pride parade several decades ago, when I was working not far from San Francisco. A co-worker had been downtown during one of these events and shared some snapshots. I can’t un-see those images. Naked butts, and other near nudity, wrapping around light poles and simply being publicly lewd. There wasn’t anything remotely wholesome or civilized about it. There’s good reason for civilized people not to want their families exposed to anything like that.

Is my finding their lewdness repulsive supposed to make me “homophobic”? I don’t think so. I would think the same thing of lewdness by heterosexuals.

And if that’s how they’re showing “pride” in themselves, can we just be clear that it’s not the righteous kind of pride; it’s the deadly sin kind.

What is the pride for? What are they saying? I’m trying to understand. But I think they’re saying, “I’m presenting myself as good for having urges that I give into, and I’ve suffered horribly because of your disapproval—so now you have to support my in-your-face lewdness as I flaunt my aberrant lifestyle—or else.”

I’m not willing to go along.

Mostly I’ll just avoid any such pride events (my preference anyway). But I’m sad at some losses. One is the rainbow symbol. Back in the early 80s, the rainbow was one of those things that started showing up everywhere—on notebooks, T-shirts, pencils. I had a plastic rainbow keychain. Rainbows are colorful and pretty. I’m sad at the loss of them any time I’m not specifically referring to a natural phenomenon following rain, or to the story of Noah and the ark.

I’m also sad at the takeover of the word “gay.” It used to simply mean happy, and it was a useful rhyming word. Now we’ve had to rewrite the lyrics to a number of old songs to avoid accidentally referring to sodomy while singing with our children.

I’m not proud of homosexuals for giving in to same-sex attraction. Why should I be? I benefit not at all from their doing so; neither does civilization.

I’m proud of (pleased with) any human being who lives a good and righteous life, and makes whatever contributions they can to our world. I’d like to see more actual virtue and a whole lot less virtue signaling.
[i] Ezra Taft Benson, “Beware of Pride,” General Conference April 1989. President Benson’s address asked Gordon B. Hinckley to read the address for him, for reasons of health incident to age.
[ii] Info from Wikipedia.

Posted by Spherical Model at 9:31 PM