Religious Bigotry with a Side of Coercion 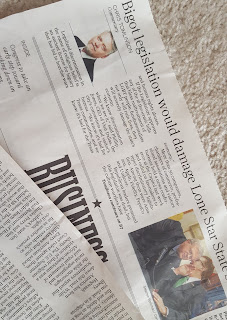 There’s a commentary piece in Wednesday’s Business section of the Houston Chronicle, by Chris Tomlinson, titled “Bigot legislation would damage Lone Star State’s economy.” I’m going to use it to demonstrate how the claim of being against bigotry is being used as bigotry.

Let’s start with what we agree on.

“Every American school child knows that your liberty extends only so far as another person’s civil rights.”
Actually, I’m not sure every school child knows this, because I don’t think schools are particularly good at teaching these things. Still, we agree that one person’s liberty must not supersede another’s.

That’s why I disagree with so much else in this piece.

Tomlinson’s particular concern is a bill in the Texas legislature, SB 17, which intends to guarantee licensed professionals the right to turn down business that goes against their religious beliefs.

This is from the bill analysis:

In 2016, four counselors across the country were expelled or terminated from counseling programs after referring same-sex clients to a willing counselor, colleague, or alternate program. The counselors referred these clients because of a sincerely held religious belief regarding marriage between one man and one woman.
There are 65 professions in Texas that require occupational licenses. These include not just mental health counselors, but attorneys, physicians, and others.

Suppose a person does not want to counsel a person to pursue transgender affirmation, or does not feel qualified to offer homosexual couple marriage counseling, because those clients believe things—and want counseling that affirms things—that are at odds with the person’s religious beliefs. This law does not prevent the client from getting the counseling they seek; it simply prevents forcing the counselor from being the person to provide that service.

So, let’s look again at that civil rights point, about it ending where another person’s rights begin. The religious person is not depriving anyone of a right. Those services are readily available elsewhere, from other service providers.

Legalized discrimination in the name of religious belief is an ancient license for bigotry that has led to horrible wars and human rights abuses.
This is a common claim in this LGBT war. It strikes an emotional chord. But what is the basis? During the anti-slavery movement—which was a Christian, religious-based moral movement, make no mistake—some people tried to use the Bible to justify owning slaves. Does the Bible, particularly Christianity, really justify that? No. God is no respecter of persons—in other words, no person is born inferior in God’s eyes to any other human.[i] So the Bible was misused as a justification for slavery. But that mistake was never the cause of slavery; slavery is a millennia old practice, justified by anyone who wants power over others. It took religious people to convince the world it was unacceptable.

Tomlinson refers to any religious person who believes that marriage is defined as a permanent commitment between a man and a woman for the purpose of forming family in which children can be raised by their own parents—the definition used in civilized societies for all the millennia of history—as “fundamentalists” who will “ruin lives” and “severely damage the state’s economy.”

He redefines discrimination as anything that doesn’t comply with the LGBT agenda. He says SB 17 would only require emergency medical personnel and law enforcement officers to respect Texans’ civil rights. This is not connected to reality. Does a person have a civil right to force a person to violate their religion? Particularly when that violation is unnecessary to provide a product or service to the LGBT (or other category) person?

Those religious people—the mainstream that make up about 70% of the US population, but is derisively and disingenuously marginalized as “fundamentalist” by Tomlinson, are not trying to remove someone else’s rights; they are simply asserting their right to live their own lives according to their beliefs. Coercion only cuts one way in this discussion; the LGBT agenda against the religious.

No part of the discussion derides an LGBT or other person or attempts to deprive them of their equal rights as citizens. So all this talk about bigotry is coming from those who are wielding that label against their enemies, the religious believers.

There’s a PragerU video by Dave Rubin, who used to call himself progressive, and liberal, and is a gay “married” man, who describes what this agenda is actually doing. I’m still not going to agree with him on everything, but I do appreciate his understanding of how to disagree without being disagreeable. And especially without being coercive. As he says,

There are a number of SOGI (sexual orientation and gender identity) bills we’re watching in the Texas State Legislature this session. Among the bad ones are requirements for housing, which sound good, but would require mixed-sex dorms and crisis centers, even for women who would not feel safe in those living conditions.

There’s a requirement to remove gender-specific terms, such as husband and wife, from marriage and birth certificates.[ii]

There’s a prohibition of discrimination in hiring based on sexual orientation or gender identity,[iii] which would mean, for example, a Christian-owned daycare owner could be sued for not wanting an obvious male dressed as a woman to care for small children. Or a Christian-owned private school could be forced to hire someone in a homosexual relationship that goes contrary to that church’s beliefs and teachings that parents pay to be taught to their children.

There are attempts to force counselors to affirm gender-dysphoria and prohibit them from even suggesting that some other therapy might be helpful—even if the client wants that alternative therapy.[iv]

These are a preview of what would be inflicted on us if the Texas legislature were ever to slip back over to a Democrat majority.

On the protection of rights side, besides SB 17 (which passed in the state Senate 19-12 on Wednesday and moves on to the House), there are bills to allow officials the right of recusal from performing same-sex weddings (not to prevent such events from happening, but simply referring the duty to someone willing to perform it).[v] There’s are bills protecting conscientious refusal for counselors and healthcare providers.[vi]

There’s a general bill, referred to as  the Free to Believe Act, intended to cover the full range of these freedom of religion issues.[vii]

Outside the SOGI agenda, but related to religious freedom, there’s a bill that will prevent an insurance provider from insisting on abortion in cases of possible fetal anomalies.[viii] And another the allows the right of refusal to perform an abortion.[ix]

There are bills to prevent government discrimination based on religious belief[x] (because, apparently, the First Amendment to the US Constitution isn’t clear enough). If you think this isn’t necessary, note that the San Antonio airport recently refused to allow Chick-fil-A to open a concession there—not because the company has ever discriminated against anyone, but because the Christian owners believe in traditional marriage and are therefore so “fundamentalist” that they should not be allowed to sell chicken sandwiches. Or make a living anywhere in any way. Or exist.

Thank you, Babylon Bee, for putting this into perspective.

The bad bills are all about coercing behavior against conscience. The good bills are all anti-coercion bills. Tomlinson represents those who want to coerce without tolerance while falsely claiming it’s OK because those being discriminated against are just hateful bigots. Hmm.

If businesses don’t want to come to Texas because it’s too savage, they ought to re-evaluate what is civilization and what is savagery. Coercion brings savagery. Freedom of religion brings civilization. Those of us who want to keep Texas free will keep doing what it takes, no matter what you call us.

Posted by Spherical Model at 6:43 PM