The Anything but Equality Act 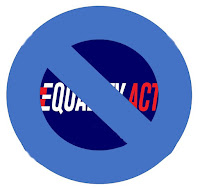 In government, when a name is applied to an act, or a bill, chances are that name is intended to obfuscate. The Equality Act, numbered HR 5, to be voted on next week, is not about equality.
HR 5 adds SOGI (sexual orientation and gender identity) to the list of protected classes in the 1964 Civil Rights Act. In granting that special protection to these behavioral preferences (or, arguably, mental conditions or illnesses), the bill has the more direct result of removing rights that are specifically identified in the First Amendment: freedom of religion and conscience, and freedom of speech.

Just in case it could be construed otherwise, the bill adds this:

The Religious Freedom Restoration Act of 1993 (42 U.S. C. 2000bb et seq.) shall not provide a claim concerning, or a defense to a claim under, a covered title, or provide a basis for challenging the application or enforcement of a covered title.
In other words, when the Federal Government attempts to coerce persons to act against their beliefs, the First Amendment and RFRA, the usual defenses, are not allowed to be used.

What are the supposed inequalities the act is purported to address? Discrimination toward homosexuals and transgendered individuals in relation to housing, employment, and public accommodation. There may be some actual discrimination that could be addressed. We can probably agree that people, simply because they’re human, deserve the right to purchase or rent housing. But we also ought to agree that there are limits to this right.

Among those limits ought to be the right to separate housing for males and females in school dormitories for those who choose this separation. A woman renting out a room in her home ought to be able to choose not to rent to a man. And there ought to be a right for a women’s shelter, for example, to exclude males from accommodation at that shelter.

Privacy and safety concerns ought to allow women the right to assume those they share intimate spaces with—such as a dorm room, a public bathroom, or a locker room—are for women only, not for men. Likewise, even though fear of being overpowered and raped is not at issue, men ought to feel free to use a urinal without someone of the opposite sex observing them.

The so-called Equality Act refuses to acknowledge any of these reasonable and justifiable feelings. The feelings and preferences of LGBT individuals are given supremacy.

We’ve talked about the Masterpiece Cakeshop case, where a baker refused to participate in a same-sex wedding. The Supreme Court ruled that he didn’t have to make the cake—but didn’t go so far as to say he actually had the right to refuse. The Court just said that he had been persecuted by his state’s animus toward his religion, leaving open the possibility that he or others could be coerced to participate against their religious convictions—if the state went about it without obvious religious animus.

So for cases in that category, business owners who have not refused to serve anyone but have refused to participate in particular activities that go against their deeply held religious beliefs could be coerced to act against conscience. Not so that LGBT people can get equal treatment—which they already had from those very defendants—but so that LGBT individuals can enforce their agenda and coerce the business owners.

The SOGI agenda is already harming women. This is most obvious in sports. Women’s sports are separate from men’s sports specifically because women are physiologically different from men. Men typically have greater upper body strength and more muscle mass. Even mediocre male athletes are likely to outperform excellent female athletes in contests of strength and speed. But recently, biological males who want to compete in women sports are allowed to, and females are mostly cowed into silence for fear of social reprisal, which includes being called transphobic and bigoted and being publicly scorned and shamed, and also may include legal lawsuits for going against the SOGI agenda. These female athletes lose out on scholarships and other benefits of excelling in women’s sports, cancelling out any benefit intended by Title IX.

Among the most troubling products of the pro-SOGI agenda are the loss of reason surrounding transgendered or various “other” genders controlling language of everyone around them, as well as common sense among mental and physical healthcare doctors, and parents.

Pronoun invention goes against how languages function and develop. A pronoun is not something a person has a right to; it is a way people who may not know anything about them beyond how they appear can refer to them in absence of a name, or out of convenience in conversation. Why should a person who claims a different gender have a right to persecute someone for using a different pronoun than that person prefers? That preference may not have been conveyed. And, even if it has, pronoun usage is a shorthand for referencing the person to a third party; it’s not a direct reference wherein a name or “you” would be used. The person taking offense isn’t even involved in the conversation in which he or she is referenced. To additionally insist on requiring words that aren’t even a natural part of the language involves so much hubris that a person might choose never to interact with whoever makes such a requirement.

What other use of normal conversation subjects a person to prosecution, persecution, loss of employment, and social ostracism? That much control over our language is something we have never granted our government and only an extreme tyranny would attempt.

About caregivers, the way the SOGI agenda works, only agreement—affirmation—is allowed. Therapists can’t say, “Let’s take a look at the underlying issues before we go ahead with anything drastic or permanent”: they can lose their license for lack of affirmative “therapy.” Even saying, “That’s not something I’m ready or qualified to support; let me recommend you to a different counselor” can be construed as breaking the law, leading to loss of license.

This bill isn’t to guarantee that LGBT people can get access to regular healthcare, such as for a disease or a broken leg. Of course they get that, and no new law is required to guarantee it. What this does is coerce physicians to do harm. Suppose a biological female comes in, claims to be a male, and insists on a hysterectomy; a doctor who sees surgically removing healthy organs as abhorrent and refuses to do it can lose the ability to do good for all the other patients she would come in contact with during her long career.

With the SOGI agenda infiltrating both healthcare and schools, fit parents are suddenly subject to losing their parental rights—simply for not jumping in to fully affirm a child’s confused concept about what that child imagines his or her sex to be—regardless of biology and everything the parents have known about that child from birth. Recognizing that gender confusion often disappears by adulthood, that transitioning typically continues or increases suicidality, that transitioning causes sterility and additional serious detrimental health consequences—all these facts are to be disregarded by parents.

Need to do some more reading on the Equality Act before you call your congressional representative? Here are some pieces specifically about HR 5:

·         “Sex Change: Physically Impossible, Psychosocially Unhelpful, and Philosophically Misguided” by Ryan T. Anderson for The Witherspoon Institute
As the pigs say in George Orwell’s Animal Farm, “All animals are equal, but some animals are more equal than others.” Special rights for some mean unequal rights for all. That’s what HR 5 does while distorting beyond recognition the very word equality.

Posted by Spherical Model at 10:16 PM