I was looking through the quote file, to see what I’d been adding lately. There were quite a number of quotes about freedom, the Constitution, and how those are both gifts from God. I get quotes from all over, but these I'm going to share, with a few exceptions, are from leaders of my religion, The Church of Jesus Christ of Latter-day Saints. It’s a worldwide church, with more members living outside the US than in it. But the words apply to all people anywhere in the world who wish to live free and happy lives. Religion has to speak up, because it takes a good people to choose to live freely. And the evidence is that God wants us all to move away from tyranny, poverty, and savagery, so we can enjoy freedom, prosperity,and civilization. 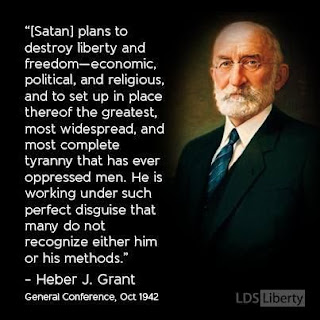 [Satan] plans to destroy liberty and freedom—economic, political, and religious, and to set up in place thereof the greatest, most widespread, and most complete tyranny that has ever oppressed men. He is working under such perfect disguise that many do not recognize either him or his methods.—Heber J. Grant, General Conference, October 1942

If we are content to let others do the work of replenishing and defending liberty while we consume the benefits, we will someday run out of other people’s willingness to sacrifice—or even out of courageous people willing to make the sacrifice.—Supreme Court Associate Justice Clarence Thomas

The building of public sentiment begins with a few earnest voices. I am not one to advocate shouting defiantly or shaking fists and issuing threats in the faces of legislators. But I am one who believes that we should earnestly and sincerely and positively express our convictions to those given the heavy responsibility of making and enforcing our laws. The sad fact is that the minority who call for greater liberalization, who peddle and devour pornography, who encourage and feed on licentious display make their voices heard until those in our legislatures may come to believe that what they say represents the will of the majority. We are not likely to get that which we do not speak up for.—Gordon B. Hinckley, “In Opposition to Evil,” Ensign, September 2004

What goes unappreciated is just why America's leftists' movement attacks the Founders. If they can delegitimize the Founders themselves, it goes a long way toward their agenda of delegitimizing the founding principles of our nation. If the leftists can convince the nation that men such as George Washington, Thomas Jefferson and James Madison were good-for-nothing slave-owning racists, then their ideas can be more easily trashed.—Walter Williams, 10-28-2017, “Undermining America”

The Constitution of the United States of America is just as much from my Heavenly Father as the Ten Commandments.—George Albert Smith, General Conference, April 1948.

Unless we members of the Church do all we can to preserve the freedoms we have, within the bounds of the laws of God, we will be held accountable.—Joseph Smith, Principles of the Gospel, pp. 135-136, pp. 146-147, published 1991

Unless we as citizens of this nation forsake our sins, political and otherwise, and return to the fundamental principles of Christianity and of constitutional government, we will lose our political liberties, our free institutions, and will stand in jeopardy before God of losing our exaltation.—Ezra Taft Benson, General Conference, April 1976

The laws that forbid the carrying of arms are laws of such a nature. They disarm only those who are neither inclined nor determined to commit crimes.... Such laws make things worse for the assaulted and better for the assailants; they serve rather to encourage than to prevent homicides, for an unarmed man may be attacked with greater confidence than an armed man.—Thomas Jefferson, Commonplace Book (quoting 18th century criminologist Cesare Beccaria), 1774-1776

It's really a wonder that I haven't dropped all my ideals, because they seem so absurd and impossible to carry out. Yet I keep them, because in spite of everything, I still believe that people are really good at heart.—Anne Frank, Anne Frank, Diary of a Young Girl

Liberty cannot be established without morality, nor morality without faith.—Alexis de Tocqueville

If we are content to let others do the work of replenishing and defending liberty while we consume the benefits, we will someday run out of other people’s willingness to sacrifice—or even out of courageous people willing to make the sacrifice.—Supreme Court Associate Justice Clarence Thomas

Relying on God has to begin all over again every day as if nothing had yet been done.—C. S. Lewis
Posted by Spherical Model at 10:24 PM