America is great because she is good, and if America ever ceases to be good, America will cease to be great.
The past couple of weeks have been a two-party contest about the greatness of America. One side says “Vote for me to make America great again.” The other side responds, “What do you mean ‘great again’? America is already great,” to paraphrase the very woman who claimed never to have been proud of her country until her husband became president—the very president who claims to be managing  the decline from Superpower status and has weakened America militarily, economically, and socially, and even racially.

Since there’s disagreement on the definition, I thought I might weigh in with a Spherical Model definition of what a great America looks like.

Often you get people using chaos (sometimes even creating it) to call out, “Give me power, and I will rescue you from the chaos.” So when you’re choosing leaders, make sure you’re not giving power to just a different flavor of tyranny.

I was reminded of the quote at the top, which I thought was from Alexis de Tocqueville’s Democracy in America. But when I went to look it up, I learned it isn’t really in there. It’s probably a paraphrase that was mistaken for a verbatim quote attributed to Tocqueville, dating back only to the early 1940s. Here’s the full supposed quote:

In the end, the state of the Union comes down to the character of the people. I sought for the greatness and genius of America in her commodious harbors and her ample rivers, and it was not there. In the fertile fields and boundless prairies, and it was not there. In her rich mines and her vast world commerce, and it was not there. Not until I went into the churches of America and heard her pulpits, aflame with righteousness, did I understand the secret of her genius and power. America is great because she is good, and if America ever ceases to be good, America will cease to be great.
It’s a good paragraph, even if it wasn’t written by Tocqueville. But he did say a number of actual things about America, which he observed as great around the end of the first half century of the Republic. Like this:

The best laws cannot make a constitution work in spite of morals; morals can turn the worst laws to advantage.
We’re seeing that now. We have our Constitution—the best laws. But without a moral people, laws fall short of maintaining civilization.

So what does a great America look like? We’ll do the list a sphere at a time.

·         It limits government to the essentials of securing life, liberty, and property for all people.
·         It protects God-given rights for its citizens. To name a few: freedom of religion, freedom to assemble, freedom to speak even when it disagrees with others, freedom of the press, right to bear arms, property rights, protection from illegal searches and seizures, right to bring up and educate our children as we see fit.
·         It protects its sovereignty and borders from invasion or infringement.
·         It avoids entanglements in the world but supports and defends its loyal allies, never attacking in imperialist offense but defending itself with full force.

·         It has a free market economy, encouraging innovation and entrepreneurship.
·         It encourages hard work and self-reliance, with the expectation that one gets to enjoy the fruits of one’s labors and risks.
·         It limits taxation to cover only essential governance and infrastructure.
·         It limits interference to protecting against monopoly and fraud, and managing fair use of publicly owned resources (e.g., mining rights, water rights on public lands).
·         It balances budgets and pays debts.
·         It does not take on charity or social engineering roles.
·         It avoids cronyism or favoritism among legal businesses.

·         It has a critical mass of religious people who live their lives in a way to honor God, family, life, property, and truth.
·         It supports the family as the basic unit of civilization.
·         It has a critical mass of intact married mothers and fathers raising their children to be civilized, contributing adults.
·         It provides for the poor and infirm voluntarily through churches, charities, and philanthropies.
·         It expects and encourages chastity before marriage and complete fidelity within marriage.
·         It expects and encourages integrity, honesty, kindness, mutual respect, justice tempered with mercy, and other virtues of civilization.
·         Its people stand boldly against ideas that attempt to dilute the Constitutionally protected freedom.
·         Its people stand boldly against savage practices and beliefs in daily life as well as in entertainments.

In early June I wrote about what my Dream Nation would look like, if I could invent one from scratch. That’s similar to what a great America looks like. I concluded:

Our original founders did everything right—except prevent us from ignoring the law and slipping southward. But that is not a problem with their system; that is a problem with the people.
So let's start with civilizing people, so that they naturally want—and work for—freedom and prosperity.


We have so much potential for freedom, prosperity, and civilization. But we’ve been sinking rapidly into the tyranny/poverty/savagery hemisphere. We can’t get back up north by following people who say, “I am the way to a great America” while they’re heading south. We might just need to head the right direction on our own. And maybe when people notice how we thrive up north on our own, enough people will want to join us. 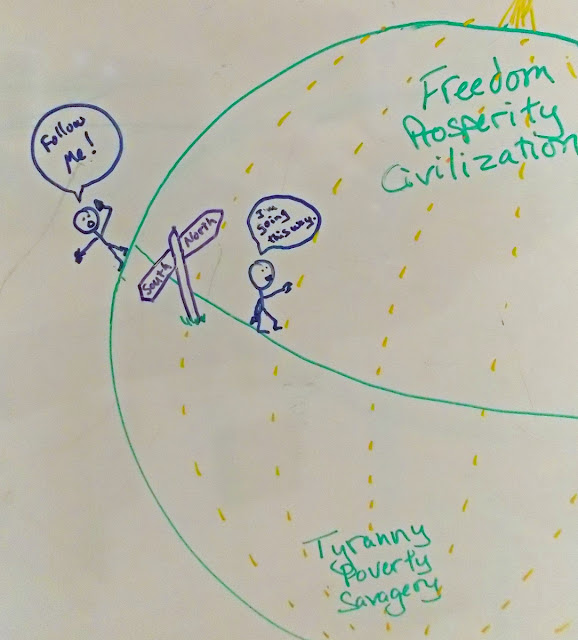 Posted by Spherical Model at 4:30 PM