One hundred years ago this week (November 7, 1917) Communists took power in Russia. This is not a day to celebrate, but it’s a day we ought to be aware of.

I grew up during the Cold War, when people understood communism was an existential threat. But an entire generation has grown up now without ever having to do bomb shelter drills.

Some years ago I was teaching the Spherical Model way of identifying ideologies for some homeschooling high schoolers. I’m not sure how much sunk in, but I remember one young man thanking me, because he’d never understood what communism, and fascism, and socialism and all those -isms meant. These things aren’t common knowledge, as they used to be.

So we’ll use today’s post as a reminder. Here’s an official definition of communism, from my very old (1980) dictionary, which includes a bit of historical perspective: 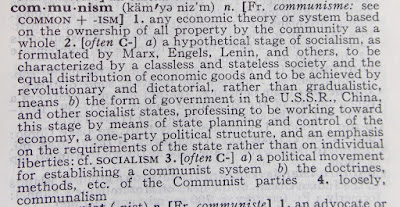 Notice that socialism is a synonym. Sometimes people separate the two by saying socialism is a stage, working toward a total communist state; they are both based on Marxist ideas.

I’m noting this, because young people seem enamored with socialism as described by Bernie Sanders, who fails to understand basic economics and refuses to admit Socialism’s nasty history.

National Review provided on Facebook a short video of Communist history, with these words:

100 years ago today [November 7], the Bolsheviks took power in Russia, establishing the world’s first communist state, and unleashing the deadliest political system in human history. During the past century, communism has resulted in unparalleled oppression, terror, and genocide. From the Soviet Union to Mao’s China, to Castro’s Cuba, to Pol Pot’s Cambodia, millions were killed by the state, in the name of total control and the elimination of “class enemies.” And millions continue to be oppressed by Communist regimes worldwide. Vladimir Lenin and his successors all declared war on civilization. And the world is still living with its consequences.


Yes, communism means war on civilization. The opposite of civilization is savagery, and that’s what they’ve wrought.

The Daily Signal did a video interview with Daniel Hannan, member of the European Parliament, who gave us this reminder:

Communism, in terms of crude numbers, must be reckoned the most lethal ideology ever devised by human intelligence. The Atlantic slave trade killed maybe 10 million people. The Nazis killed maybe 17 million. Communists killed 100 million people. Some of them were shot into pits. Some of them were arrested at night, and worked to death in Gulags. Some of them were starved as deliberate policy to enforce collectivization. You don’t get more murderous than that. So, why is it acceptable to wear a Che Guevara T-shirt now? Why isn’t that in the same moral category as wearing an Adolf Hitler T-shirt or an Osama bin Laden T-shirt?
Victor Davis Hansen wrote a piece reminding us of the good contributions of Russia during WWII—which shows that there can be good, courageous people even under a bad regime. But in that piece he mentions this data:

Prior to the German invasion, Stalin was responsible for some 20 million Russian deaths through forced farm collectivization, planned famine, show trials and purges, and the murders of his own Red Army troops. More than 10,000 soldiers were likely executed at Stalingrad by their own officers.
These words, from Ezra Taft Benson[i] in 1962, sound pre-contemporary to our ears today, yet what he says is still pertinent:

The Communists bring to the nations they infiltrate a message and a philosophy that affect human life in its entirety. Communism seeks to provide what in too many instances a lukewarm Christianity has not provided—a total interpretation of life. Communists are willing to be revolutionary, to take a stand for this and against that. They challenge what they do not believe in: customs, practices, ideas, and traditions. They believe heatedly in their philosophy.
But our civilization and our people here in America are seemingly afraid to be revolutionary. We are too "broad-minded" to challenge what we do not believe in. We are afraid of being thought intolerant, uncouth, or ungentlemanly. We have become lukewarm in our beliefs. And for that we perhaps merit the bitter condemnation stated in the Book of Revelation 3:16: "So then because thou art lukewarm, and neither cold nor hot, I will spew thee out of my mouth."
This is a sad commentary on a civilization which has given to mankind the greatest achievements and progress ever known. But it is ever a sadder commentary on those of us who call ourselves Christians, who thus betray the ideals given to us by the Son of God Himself. I ask, are we going to permit the atheistic communist masters, fellow travelers, and dupes to deceive us any longer?
There is a deception going on in our country this very moment which is just as dangerous to the United States as the false pretensions of Fidel Castro were to Cuba. It is amazing to me that some of our citizens seem to take special delight in ridiculing the warnings of government investigators and the cry of alarm which comes from Iron Curtain refugees when they see how the United States is being led carefully down the trail of disaster.
He's right. Here, in this nation so blessed with freedom—which has shared the ideals of freedom with much of the world—must not give up that heritage for lack of speaking up. Let’s be clear about this: Communism is a sure way to tyranny, poverty, and savagery. We must consistently head the opposite direction, toward freedom, prosperity, and civilization.


[i] Ezra Taft Benson was at one-time Chairman of the Department of Agriculture, and later the President of The Church of Jesus Christ of Latter-day Saints. This quote is from The Red Carpet, Bookcraft, 1962, pp. 53-54.
Posted by Spherical Model at 10:15 PM