Yesterday would have been my Dads 99th birthday. He was late to fatherhood—39 when my twin brothers finally showed up, and 40 when I came along barely over a year later. We had him around a good long time. He was 91 ½ when he passed away in late 2009. But the age gap meant we were relatively young to lose our Dad, especially so for my sister, who is eight years younger than I am. I have a lot of friends a decade or more older than I am who still have their parents. That’s part of the variety of life.


Anyway, since Father’s Day is coming up this week (which began in 1910, eight years before my Dad was born), I thought I’d go ahead and honor fathers—with their civilizing superpower, today.

I’ve written about fatherhood, and Father’s Day, fairly regularly here. There’s an even larger list related to strong families, but we’ll focus mainly on fatherhood today. So here is the collection, after which I’ll pull out a few highlights:

In an interview about the study, Dr. [Brad] Wilcox said,

After kids come along, men are more likely to be engaged civically in their communities in activities ranging from youth soccer to church. Furthermore, they typically work harder and earn more money after they become dads, provided that they live with the mother of their children. One study found that “married, residential, biological fatherhood is associated with wage gains of about 4 percent, but unmarried residential fathers, nonresidential fathers, and stepfathers do not receive a fatherhood premium.” So, men become more engaged at work and in civil society in the wake of assuming the role of fatherhood.

Many of the outcomes of good fathering reinforce what sociological studies have been showing for some time. Additionally, though, Dr. Wilcox says having an involved father in the home actually leads to better mothering from mothers—assuming the father is doing his job well. He said, “It’s crucial for married fathers to do their best to be attentive, affectionate, engaged in the practical work of the home, and thankful towards their wives.”

There’s a summary of family research I often turn to for data, called Why Marriage Matters. I’m going to list some of the conclusions here, to show how important it is to children and to civilization for fathers to be present in the family. (Please go to the original for sources and more details, available through www.AmericanValues.org.)

1.     Marriage increases the likelihood that fathers have good relationships with their children. (Children of divorce report having much worse relationships with fathers.)
2.     Cohabitation is not the functional equivalent of marriage. (Outcomes for children are equivalent to single-parent households, with higher incidents of abuse.)
3.     Growing up outside an intact marriage increases the likelihood that children will themselves divorce or become unwed parents.
4.     Marriage is a virtually universal human institution. (It is a significant factor in every civilization in history.)
5.     Divorce and unmarried childbearing increase poverty for both children and mothers.
6.     Married couples seem to build more wealth on average than singles or cohabiting couples.
7.     Married men earn more money than do single men with similar education and job histories.
8.     Parental divorce (or failure to marry) appears to increase children’s risk of school failure.
9.     Parental divorce reduces the likelihood that children will graduate from college and achieve high-status jobs.
10.  Children who live with their own two married parents enjoy better physical health, on average, than do children in other family forms.
11.  Parental marriage is associated with a sharply lower risk of infant mortality.
12.  Marriage is associated with reduced rates of alcohol and substance abuse for both adults and teens.
13.  Married people, especially married men, have longer life expectancies than do otherwise similar singles.
14.  Marriage is associated with better health and lower rates of injury, illness, and disability for both men and women.
15.  Children whose parents divorce have higher rates of psychological distress and mental illness.
16.  Divorce appears significantly to increase the risk of suicide.
17.  Married mothers have lower rates of depression than do single or cohabiting mothers.
18.  Boys raised in single-parent families are more likely to engage in delinquent and criminal behavior.
19.  Marriage appears to reduce the risk that adults will be either perpetrators or victims of crime.
20.  Married women appear to have a lower risk of experiencing domestic violence than do cohabiting or dating women.
21.  A child who is not living with his or her own two married parents is at greater risk of child abuse.

The study summary ends with this conclusion:

Marriage is more than a private emotional relationship. It is also a social good. Not every person can or should marry. And not every child raised outside of marriage is damaged as a result. But communities where good-enough marriages are common have better outcomes for children, women, and men than do communities suffering from high rates of divorce, unmarried childbearing, and high-conflict or violent marriages. 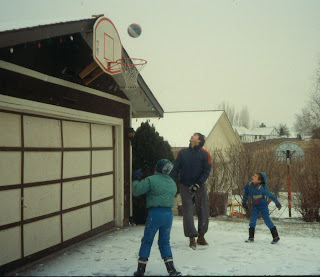 Here are a few of the quirks we’ve observed in our household Dad, Mr. Spherical Model.

·         Vacations are for doing things you don’t normally get to do, or see things you don’t normally see; so there’s no excuse for wasting a minute. You fill every minute. Ten+ miles a day should be minimum.
·         Sports are for girls every bit as much as for boys—and Dad will just about always be the coach (which explains why daughter Social Sphere learned basketball instead of dance).
·         A dad that is big enough to intimidate just by walking in a room and looming over everyone gets the luxury of acting friendly to the kids’ friends.
·         Being considered an honorary teen for several extra decades is better than a lot of worldly honors.
·         It’s good to be one of those dads/grandpas/neighbors who loves holding babies and is sure he has the secret formula for calming fussiness.
·         When you say no to a daughter and she texts back that she hates you, you can be sure that she doesn’t really hate you and an apology is forthcoming; but you can save the texts to illustrate the amusing anecdote later.
·         Sure, save for a daughter’s wedding, but no matter what, it will cost more than you ever envisioned—but if you’ve been a good Dad all along, then she’s probably choosing the right groom, and it’s worth it.
·         Never swear around the Mom or kids, and the kids won’t swear around their Mom either (and maybe not around their friends either).
From “Building Better Families”

Some years ago I had a lesson to give in our children’s auxiliary on Father’s Day. I wanted to be sensitive to any child that day who didn’t have a father, because if we made something to give to fathers and they didn’t have one, they could feel excluded. So I looked at the list of 60 or so children—and there was not a single child not living in an intact two-parent household. In our world today I know that’s rare. I know it’s rare even within my church. It was a snapshot. But it was telling. In that little community parents were doing many things right. The odds continue to build up against us, but the solutions to stopping and correcting the decay are known. They just have to be chosen.

And one final quote:

“One father is more than a hundred schoolmasters.”—17th Century English Proverb
Posted by Spherical Model at 9:05 PM