Some things have been spun as equivalent that are not. Here are a few:

·        Defunding NPR ≠ killing Big Bird, or closing down that communications company; it simply means funding would need to come from someplace other than taxpayer money.
·        Medical insurance ≠ medical care. In fact, medical insurance—especially once mandated as an employee benefit, interfered with the market and raised prices so that medical care became harder for the patient to pay for.
·        Repealing Obamacare ≠ eliminating health care. It means that we would eliminate the expensive mandates and other coercions that have made it harder for people to pay for the insurance they want or the care they need.
·        Being against illegal immigration ≠ racism; it is not even equivalent to being anti-immigration. It is likely equivalent to favoring law-abiding immigrants.
·        Being against a higher minimum wage ≠ keeping families in poverty. It is, rather, being in favor of a free market in which entry-level workers get opportunities to earn entry-level wages while gaining valuable experience that will help them become more valuable employees in the future. Conversely favoring a higher minimum wage = outlawing jobs for many entry-level workers.
This list could do on. But I’ll add one more, that I’d like to spend time on today:

·        Favoring school choice ≠ being against educating all children. Just the opposite, in fact. And I’ll add, eliminating the US Department of Education ≠ eliminating public schools. After all my entire public education happened before that political entity was established, so I know it can be done. 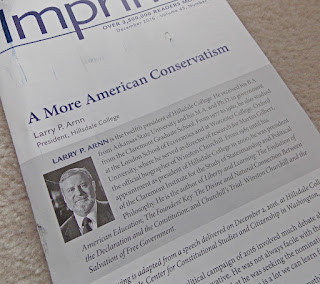 In the December issue of Imprimis, Hillsdale College President Larry Arnn speaks about “A More American Conservatism.” The overall piece looks at the question of whether the new president can be identified as a conservative (answer: we’ll see what he does, but there are some reasons to be hopeful). But a large section talks about education, which is a specialty of his, as president of an influential liberal arts college. And I’d like to share some of that.

Dr. Arnn mentions that he approves of the appointment of Betsy DeVos. He says, “Trump has nominated the splendid Betsy DeVos to be secretary of the Department, and she is a fighter for every kind of school choice.” These words are comforting. She has now been sworn in, after a tie-breaking vote from Vice-President Pence.

Dr. Arnn says this about the Department of Education:

The federal government spends seven or eight percent of its money on education, and its method is typical of the federal intrusion into local matters: it gives money from the federal treasury to state and localities on condition. The conditions are myriad, confusing, and usually ugly when they can be understood. Title IV of the Higher Education Act governs federal student aid, and it numbers around 500 pages. A lawyer for our college told me once that I would be unable to read it, because he himself cannot read it, for which reason his firm keeps a specialist who is the only person he knows who understands what it says. For this reason alone, it would be a grand thing to get rid of the Department of Education.
Someone quipped that, if you really hate DeVos in charge of the Department of Education, support the bill to eliminate that department—and she’s gone.
Here’s another nonequivalence:

·       The Department of Education ≠ better education outcomes for students. In fact, there have been no appreciable increases in education outcomes since this bureaucracy was established, but costs per student have skyrocketed.
Dr. Arnn shares a basic principle about education:

The first thing to understand is that human beings are made to learn, and they desire to do it naturally. This means the job of teachers, like the job of parents, is to help children learn, not to make them or cause them to learn. Good schools are built around this fact.
One of the arguments for a national bureaucracy over education is that every student, in every state, ought to have the opportunity for education as some minimum standard, and so national standards and testing are necessary. But testing ≠ meeting a standard. In fact, setting a minimum standard ≠ better education outcomes.

Dr. Arnn talks about a kind of standard that would be useful:

The chairman of our education program at Hillsdale College has written a series of standards that states might adopt for K-12 education. For each grade, they take up about half a page. But if a child can do the things on that half a page, the child has earned a lot. Here is a way for higher levels of government to be sure that any money they give to lower levels is well spent in education. It involves hardly any management of details. That is the constitution model, the model that comes from our Founding.
To follow this practice would liberalize the system. It would mean that there would be plenty of bad charter schools, just as there are plenty of bad schools now. But it would also mean that there would be a proliferation of good ones.
Charter schools are just one type of school choice. At this point there are not enough of them.

Here are some of the numbers in Texas. There are 5.2 million K-12 students (10% of all kids in US). Of that 5.2 million, 250,000 attend private schools, 300,000 are homeschooled, and 250,000 attend charter school. There’s a wait list of an additional 130,000 for charter schools. That’s why there must be lotteries to settle who attends a charter school (which is a public-school-funded entity that operates on different principles with different, often innovative practices).

Of those 87% attending public schools, 900,000 (20% of public-schooled students) are stuck in 1,032 failing schools—schools that have failed to show progress for three years in a row. There are considerably more students stuck in hopelessly failing schools than there are students being taught by parents, private schools, and charter schools added together.

That is what bureaucracy has wrought. To want that status quo = not caring about the education of the next generation. There ought to be a better choice for every family with a student they care about.

Everybody wears a uniform and signs an honor code. Everybody studies mathematics at least through pre-calculus. Everybody learns Latin, history, literature, philosophy, physics, biology, and chemistry. Everybody is admitted by a lottery system. For the inner-city schools, care is take to advertise only in the immediate area, to make the opportunity available to the children who live in poor areas. The students in these schools make on the average excellent scores on the ubiquitous state standardized tests, and they do this without class time or curriculum set aside to pare for those tests. They do very well even in relation to the legions of public schools that now take months to cram only for those tests.
While these schools work well, he does not recommend making every school like this. It is the choice that makes the difference. Standards are high. Everyone is there voluntarily. The same is true at Hillsdale College. He says,

At Hillsdale College the curriculum is rigorous and the standards of behavior are high. But they are not imperative. The ultimate penalty is simply this question: are you sure you want to be here, when there are so many other options, options generally not quite so difficult or strict? The student who responds yes to that question is self-governing, which is the aim. That is why we at Hillsdale would not support a national law that everyone had to do what we do. We know too much about human beings to think that would work.
Knowing about individual human beings is something distant bureaucracies are particularly not good at.

Dr. Arnn ends his education portion with these hopeful words about a reformed Department of Education:


He admits that such reforms would indeed “lay the ground for the Department’s abolition.” But, again, that ≠ less education; it actually can mean better education at lower costs—which are outcomes that market choices among good, free people, almost always bring.
Posted by Spherical Model at 2:02 PM