In the Fifteen Years... 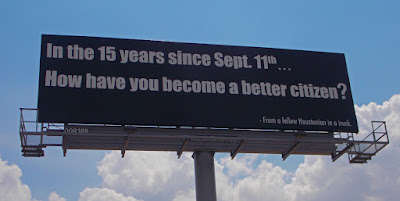 A few days ago we were driving down the freeway and came upon this billboard. Interesting question, I thought.

During the early days after the attack, we Americans were remarkably united. There weren’t two ways of looking at things: we were attacked, unprovoked, on our own soil, with the intention of killing as many Americans as possible, and causing us to cower in fear. The enemy’s goal then, and still, is either our totally annihilation or total submission.

That didn’t work, because we’re Americans. We stood up, fought back, and rebuilt.

But the billboard question is relevant, because after just the first year or so, there was a separation between Americans who love America and want to be good citizens, and Americans who disapprove of America as a constitutional republic and insist America is evil until it is fundamentally transformed, preferably into a democratic socialist regime. We’re separated into those who became better citizens of America and citizens-in-name-only who do not pledge allegiance to the Republic.

Good citizens of America know the Constitution better now than we did in 2001. We pay more attention, contact our representatives more often, and speak up more often.

Good citizens vote more regularly, and more informed, than they voted before 2001.

Good citizens tend to be puzzled by the growing number of fellow Americans who assume, without evidence, that America is more racist and stratified than ever before (and more than just about anywhere else), and that America’s intentions internationally are imperialistic and oppressive. We’re puzzled by the twisting that calls evil good and good evil, and the pervasive media that assumes we all agree on these twists.

How could there be this divide, when we were so united after the attack that is still fresh in our minds after 15 years?

Maybe it isn’t fresh enough in some minds. Maybe that’s why we have to keep memorializing this day. 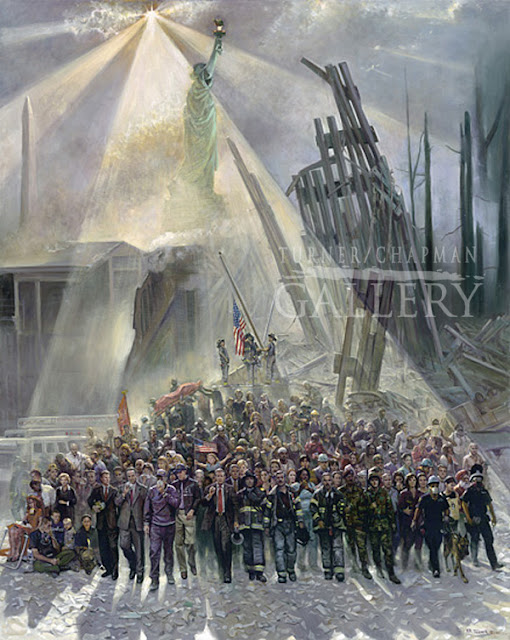 This painting, “Out of the Ashes,” by Ken Turner, continues to be my favorite image of 9/11. There are a several versions of it, one in NYPD headquarters, another in NYFD headquarters. The ghost images, different in each version, represent actual people who died in the attack and the aftermath.

Several years ago there was a Darryl Worley song, “Have YouForgotten,” shared among the citizens around 9/11, with images to remind us. The words are still  appropriate; this is the chorus:

This year I came across a new one. The song isn’t new, but the rendition along with the images is new. It’s Simon and Garfunkel’s “Sounds of Silence,” done grittier, with the images we shouldn’t forget. Worth watching in remembrance.

Another video I hadn’t seen is from a girls’ dorm room at NYU. They record what’s happening after a plane crashed into the first tower. They don’t yet understand what is going on; they think it is a freak accident, and while they’re shocked, they’re still pretty calm. Then the second one hits, and someone receives news that it’s terrorism, and the panic hits. This is not for the faint of heart, but it bears watching, to remind us we weren’t exaggerating the magnitude of the attack. The link is here.

On Glenn Beck’s show today, he interviewed a man who survived the attack on the Pentagon, because he had stepped out of his office to use the restroom. He was badly burned, but no one else in his office survived.  I think he is allowing this episode available for viewing without a subscription, at least for a time.

I think we need to keep these images in mind. Not so we can remain angry and vengeful. But so that we can recognize that there is a real battle still going on—between good and evil. Good citizens will be very clear about which side they’re on.


“A people that no longer remembers has lost its history and its soul.”—Aleksander Solzhenitsyn
Posted by Spherical Model at 7:56 PM

Email ThisBlogThis!Share to TwitterShare to FacebookShare to Pinterest
Labels: "Out of the Ashes", 9/11, Darryl Worley Have You Forgotten, good citizenship, remembering, Sounds of Silence