Five Years of The Spherical Model

The Spherical Model blog started five years ago March 4th, on a Friday that year too. This is one post short of 700. So, let’s celebrate! 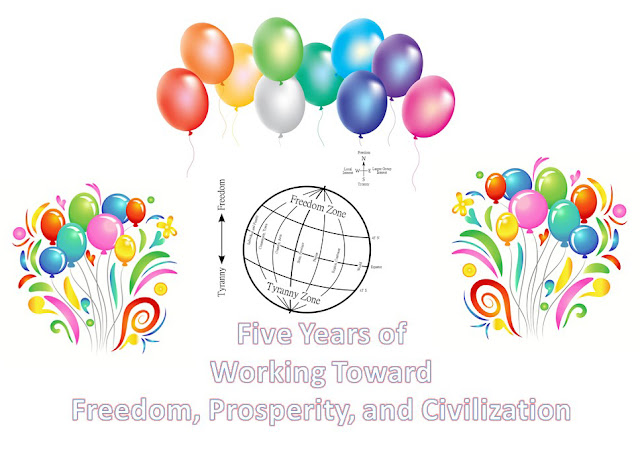 We might as well take this opportunity to explain, once again, what The Spherical Model is.
The Spherical Model is an alternative to right/left, in looking at political ideas. Instead of a linear spectrum, it’s three-dimensional, just complex enough to also show the interrelationships between the political sphere and the economic and social spheres.

The long version is at the website SphericalModel.com. This contains an introduction and four longish articles:

The short version is available in print form in this post from the end of 2014: The Political Sphere Is Round.

Since the concept is three dimensional, maybe you’ll understand it better visually. So I have explained it in a video, which I’ll repeat here:

I use this blog to talk about the three spheres, how they interrelate, and sometimes how we’re seeing these concepts play out in current events. So I’ll offer one short example today.

I’ve been involved in a private conversation with some people I like who are supporting Trump, whom I oppose (and have written why). One reason is that he is a disrupter, and they think Washington needs a disrupter, because the status quo isn't working.

In the Spherical Model, we recognize that there are two halves of tyranny: tyranny of the state and tyranny of chaos. Tyrannists frequently use chaos as an opportunity; they offer themselves as the solution to chaos, resulting to power for them over their subjects (i.e., “Believe me, we’re going to be great again.” Trump’s direction of disruption is horizontal, towards chaos, keeping everything in the southern hemisphere.


Alternatively, disrupting the statist tyranny status quo can be a good thing if the change is northward. For that to happen, it requires returning to the Constitution’s limited government (political sphere), getting rid of crony capitalism and refraining from government interference in free enterprise (economic sphere), and encouraging a righteous people to value life, family, property, and truth (social/civilization sphere). The three sphere’s interrelate.
Posted by Spherical Model at 6:00 AM