In the Spherical Model, I use the word savage as the negative, southern hemisphere quality of the social sphere. There are a number of examples in the news these days: i.e., the beheadings of journalists, the execution of non-Muslims who refuse to convert.
Sometimes the news stories and commentary use the word barbaric, and sometimes savage. So I’m spending a day quibbling over word choice while horrendous things are happening—in hopes that greater understanding will help move the world in the right direction.
The words savage and barbaric are essentially synonyms. In my thesaurus, the first synonym for savage is barbarous. And under barbarous/barbaric, savage is listed in the mix. There may be differences, but they’re somewhat subtle. Still, I chose one over the other.
The word barbaric is a word that historically meant, in the ancient world, someone from some culture other than Greek, Roman, or Christian. It could mean less civilized, less technologically advanced, less developed—because much of the world beyond the empires was often backward, or primitive, in those ways. But not always; sometimes it just referred to something foreign or strange, not the way of the culture doing the naming.
Sometimes (often today) the word barbaric is used to refer to behavior: crude, uncouth, boorish, unmannerly, wild, unrestrained—but also brutal or cruel.
The word savage can also refer to a culture that is primitive: lacking in technology and education, possibly lacking in writing. In some circles there’s the idea of the “noble savage,” someone from a primitive culture who is nevertheless more “civilized,” more wise about nature and living a good life, than the supposedly civilized person. But this is pretty much a myth. There may be people within primitive societies who live in a civilized way; they are, then, by definition, civilized, not savage. The mythologized ones are more likely to be looked at through a lens focused on a specific thing, with much else left purposely out of focus.
This is part of an agenda to equate all cultures as equally valid. It’s a lie. You can have a lot of differences between cultures that may be equally valid—food, music, dance, language. But you still only get civilization when you have a religious people, who recognize that their rights come from God, who live a code of behavior essentially equivalent to the Ten Commandments—valuing God, family, life, honesty, and doing good to others.
I chose the word savage, in the Spherical Model, because the behavior description is more accurate. Also, there’s no confusion with the Barbary Coast, an area known for piracy—definitely a barbaric, or savage, behavior—where the word is not actually related to barbarian, but to Berbers, the north African peoples.
So, while barbaric is also the antipathy of civilization, the important contrast is between the bad behavior and our goal: civilization.
I’ve been reading a novel in which the comparison between civilization and barbarians keeps coming up. I’m not sure whether to recommend this book/series—The Kingkiller Chronicles, by Patrick Rothfuss. I read the first one for book club last month, The Name of the Wind. It was an interesting read, a slightly magical world something like our Middle Ages Europe, but not really that. It’s a quest story, with a young man coming of age. But in the near 700 pages of book one, he makes almost no progress on the stated quest. I am now almost 800 pages into the second book, The Wise Man’s Fear, and other than a sentence or two, there’s still been no progress toward the stated quest. [I don’t think book 3 is written yet, so who knows if the quest will be completed, or whether how Kvothe got where he is will be explained.] Nevertheless, some interesting stuff happens. 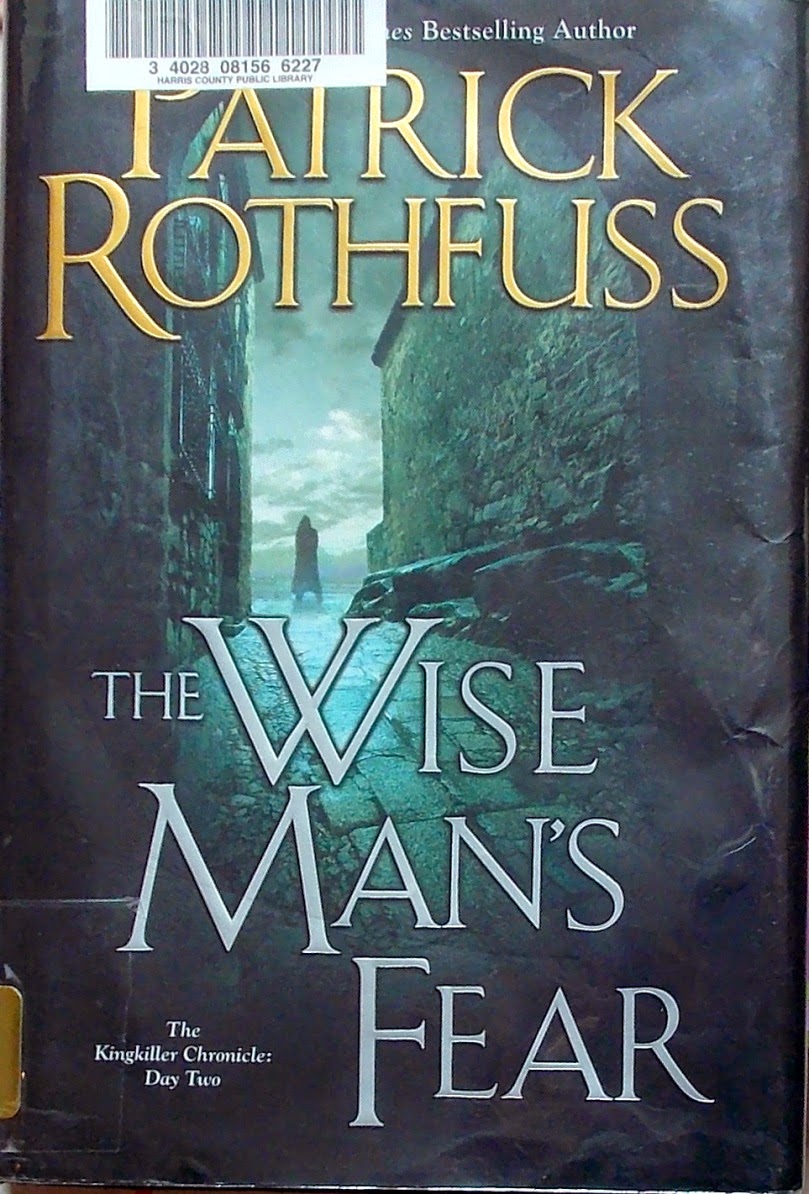 I had been warned about book two, because there are some rather ridiculous prurient parts with a fairy—going on for at least a hundred pages. Not too explicit, fortunately, but still evidence that the author doesn’t really understand civilization.
But I am tuned in to pick up little conversations about civilization. And this second book has some of that. At one point the main character, Kvothe, is sent on a quest by the Maer (minor king) to get rid of thieves who have been making the roads dangerous, interfering with trade, and confiscating tax money that has to be replaced. One of the mercenaries sent with him is from a different culture, the Adem. The descriptions of the look of the people is what we’d consider northern European—all seem to have sandy colored hair and gray eyes. But their culture seems to be a pretty good replication of some Asian cultures.


Tempi is mostly silent, but dangerous in a fight. Like a ninja. He has trouble with the language, foreign to him. But eventually Kvothe begins to communicate better with him, and learn from him. Chapter 82 (starting on page 545) is called “Barbarians,” referring to those outside of Tempi’s native culture. The differences include how they speak. Tempi’s people, use fewer words and more subtle hand signals And they try to follow some inexplicable guidance from within called Lethani. They also have many layers of meaning, like you might find in Korean, and tonality, like you might find in Mandarin. So it’s not a direct correlation with something specific in the nonfictional world.
Kvothe is telling the story here:
I nodded slowly, trying to imagine what it must be like for Tempi, constantly assaulted by people too rude to keep their expressions to themselves. People whose hands constantly made gestures that were nonsense. “It must be very hard for you, out here.”
“Not so hard.” Understatement. “When I leave Ademre, I know this. Not civilization. Barbarians are rude.”
“Barbarians?’
He made a wide gesture, encompassing our clearing, the forest, all of Vintas. “Everyone here like dogs.” He made a grotesquely exaggerated expression of rage showing all his teeth, snarling and rolling his eyes madly. “That is all you know.” He shrugged nonchalant acceptance, as if to say he didn’t hold it against us.
“What of children?” I asked. “Children smile before they talk. Is that wrong?”
Tempi shook his head. “All children barbarians. All smile with face. All children rude. But they go old. Watch. Learn.” He paused thoughtfully. Choosing his words. “Barbarians have no woman to teach them civilization. Barbarians cannot learn.”


That detail, of women needed to teach civilization, caught my attention.
Later in the book, Kvothe travels with Tempi to his home town of Haert, and begins to learn from the people there. Their school teaches “Lethani,” which is unknowable, maybe like chi, and fighting skills—very much like Asian martial arts, including patterns of practice called Ketan, which sound a lot like katas, or my Tai Chi routine (but performed perfectly, at the slow pace of honey spilled on a table, which I have not accomplished).
Women do the teaching, and are considered the better fighters. Kvothe is surprised by that:
Vashet [his teacher] nodded, pleased [at what he had noticed in a spar between two young boys]. “They fight like puppies. They are young, and boys. They are full of anger and impatience. Women have less trouble with these things. It’s part of what makes us better fighters.”
I was more than slightly surprised to hear her say that. “Women are better fighters?” I asked carefully, not wanting to contradict her.
“Generally speaking,” she said matter-of-factly. “There are exceptions, of course, but as a whole women are better.”
“But men are stronger,” I said. “Taller. They have better reach.”
She turned to look at me, slightly amused. “Are you stronger and taller than me then?”
I smiled. “Obviously not. But as a whole, you have to admit, men are bigger and stronger.”
Vashet shrugged. “And that would matter if fighting were the same as splitting wood or hauling hay. That is like saying a sword is better the longer and heavier it is. Foolishness. Perhaps for thugs this is true. But after taking the red [refers to the uniform color, becoming a traveling guardian, called mercenary for lack of a better translation], the key is knowing when to fight. Men are full of anger, so they have trouble with this. Women less so”


It’s an interesting view. In our culture, I think it is assumed emotion is female, and logic is male—even though that is stereotypical and right only about 50% of the time for either sex. It’s probably right only about as often in their fictional world as well.
Unless you assume, not emotions, but specific emotions. Females are less likely to fly to anger, to enjoy harming physically in retaliation for offense; females are more likely to care for and nurture others. Females are less likely to seek to conquer, and more likely to seek reconciliation and collaboration. Some emotions are more civilized than others. And, in general, women tend toward those emotions more than men do.
Maybe that is why God designed the family to have women in the position to civilize the next generation. Men are needed too—to teach hard work, honesty, honor, courage, and being gentle even when you have the strength to be coercive. Those are important in civilization too. But men are more likely to exhibit those characteristics if they were raised by a good woman and have committed in marriage to a good woman.
Children benefit from the civilizing nurturing of mothers as well as the example of a civilized father. Both. In the family, the microcosm of civilization. Parents, “Raise up a child in the way he should go: and when he is old, he will not depart from it” (Proverbs 22:6).
There is so much ugly savagery in today’s world. There is news that we can’t even bear to view—because you can’t unview such things. But in the sacred family home, there can be civilization. And from there it can spread.
Posted by Spherical Model at 1:29 PM