This is part II of information about a local school board election. I hope the thought process is valuable beyond the very local area.
I left off part I with this question for school board trustee candidates, about priorities: You have three constituencies in your elected position as school board trustee: taxpayers, students, and teachers. How do you prioritize these constituencies, and why?
I’ll introduce each of the three candidates, along with their order of priorities. I do think there’s a right answer, but almost no one ever gives it. I’ll cover my reasoning below. 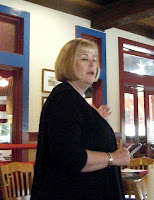 Darcy Mingoia is the PAC candidate, running in tandem with Kevin Hoffman for the other open position (we didn’t hear from candidates for that position yet). She sees herself as conservative. She works in fundraising for the community college system, and even worked with the local chamber of commerce some years back to start the community college system. She has lived in the district for 34 years. She has been a small business owner, and served as president of the chamber of commerce for ten years. She went through school on scholarship (from a private foundation) and believes the community needs to help students get through school. Her kids went into engineering. She worked as a PTO and library volunteer, and then stayed connected as a volunteer representing the business community. She was instrumental in getting the access channel on cable so the community could view school board meetings.
She has a good resume. However, reaction to questions about the PAC showed her bristling, feeling adversarial to us Tea Partiers. I learned more about the PAC at this meeting, and I feel less knee-jerk rejection of anyone they put forward. Still, what I see is that the PAC has been detrimental to our district, regardless of their possibly well-meant intentions.
·         She answers the priorities question in this order: students first, then teachers, then taxpayers. 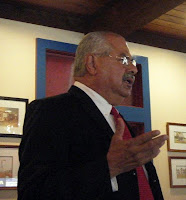 Bill Morris is the incumbent, and is probably best known for his vote against that big pay raise (discussed in part I). He’s been targeted for removal based simply on that vote, but he has fairly frequently stood alone or nearly alone against the rest of the board. He says he frequently puts forward ideas, but they do not get brought up for discussion, let alone for vote. It’s a tough position to be in. For a while, he was undecided about whether to run again, but in the end decided that he needed to keep standing firm; we needed someone who would.
He works for food services in HISD (Houston Independent School District), so his work lets him handle large portions of school budget, but without a conflict of interest within our district.
He is a man of few words. I would have liked to hear more details from him, more positive. He seems frustrated by the situation and mentioned a number of negatives. For example, a controversial issue has been the use and upkeep of a huge facility the district built (pretty much against the will of the people), with a football stadium, basketball arena, and theater areas. It is shared by various high schools in the district, but the rest of the time should be rented out to the community to mitigate costs. Some of that does happen, but there has been discussion about “thinking outside the box.” Renting out for events that would like to serve alcohol, such as weddings or some conventions, have been prohibited. Bill Morris is against that particular type of use; it is, after all, a high school facility. If alcohol were allowed, even under these specific circumstances, it would be the only such facility in the state to allow it. Not a good precedent to set. So, whether you agree or not, he is clear and firm in his position.
He pointed out that the head of the PAC had a school named after her, after the PAC got a particular candidate elected to the board. There’s an appearance of cronyism. Again, an apparent complaint. But, as a positive, he did give us an update on the efforts to push for parity among funding per student. Nearby Tomball district, for example, gets several hundred more per student than CFISD students. There has been pressure on the legislature, without effect. So now there is hope that pressure through the courts will have success. That case is coming up October 22nd.
·         He answers the priorities question in this order: students first, then taxpayers, then teachers. 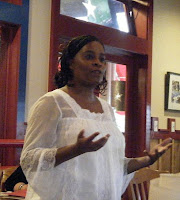 Lillian Wanjagi is a young mom, involved in higher education for 16 years, previously at Rice, and now at University of Houston Clear Lake. She has a third grade daughter at a school not far from me, who is her inspiration to get involved. She is working on her PhD, and her research topic is related to student success. I probably learned most from her during the Tea Party meeting (and conversation afterward). She grew up in Kenya, going through a British school system, so she at least has views beyond what has always been done here. I have seen school function better than here, so I like that there’s an outside view.
Her main points included giving choice to parents, who are “the main stakeholders in a child’s education,” and in setting priorities within a budget that will best affect quality for the student. She brought some interesting data. For example, of the $5000 per student spent in this district, $403 goes to ESL (English as a second language). That is the highest per student cost for a program. (Making sure you understand, this isn’t $403 per ESL student; it is $403 per student in the district in order to have an ESL program for those that need it.) For comparison, $82 per student goes to having sports programs; $55 goes to gifted and talented programs. (I can attest that the GT program is sub-par, as you’d expect if you’re spending seven-to-eight times more for ESL.)
Someone asked if we know how much of our budget goes to paying to educate and provide food and other services for children of illegal immigrants; we don’t have that data, although there were efforts in the last legislative session to try and obtain the data. The ESL program is, in theory, intended as a way to give a start to new immigrants (and schools don’t ask if the immigrants are legal or not) to get educated while learning the language. Many of these are certainly legal. But all the children of illegals will fall in this group as well. As Wanjagi said, we are required to educate all students, including illegals, but we’re not required to spend more on them than on our own students. So it’s about how you prioritize the spending per child, so that you get the quality we all want.
·        She answers the priorities question in this order: students first, then teachers, then taxpayers. However, more than once she said, “Parents are the most important stakeholders.” That comes very close to being a better answer.
In reality, the school board is hired for a specific purpose by the taxpayers and are not accountable to either the students or the teachers. But people hear a different question than I’m asking: “Who is most important to you?” Anyone involved in education who doesn’t answer that the students are most important is in the wrong place. But believing you’re accountable to students isn’t helpful. Students are likely want easy grades and fun classes—not necessarily things we know will lead to the outcome of best educated students. So saying you’re “for the children” isn’t very informative. So sometimes you have to look at the priority order between teachers and taxpayers.
In very fact, the trustees’ job is to carry out the mission of educating our children to the level we taxpayers request and expect, for the money we have contracted to provide. If they can’t do the job to the satisfaction of the taxpayers, they should be replaced with someone who can. What the students and teachers think of the trustees is irrelevant.  If they are faithful in their stewardship to the taxpaying community, the students will receive a good education—better than we’re seeing. And I don’t mean to imply that teachers are irrelevant. It is important to hire, retain, and compensate the best teachers we can get, in order to meet the mission. If trustees are being accountable to the taxpaying community that hires them, they will do what it takes to meet the mission. Teacher skill and satisfaction will be the result.
When a trustee mistakenly bows to the will of teachers (teacher unions/organizations), they may be betraying the taxpayers who hired them. That we have such resistance to merit-based pay and other performance related issues means someone is protecting ineffective teachers—which benefits neither the students nor the good teachers, and certainly not the taxpayers in their educational mission.
All three of our candidates were glad Texas has refused to accept federal money that came with strings attached. Texas is a rarity in this decision. But we believe we’re better off without submitting to yet more federal mandates.
All three of our candidates said they were in favor of keeping control as local as possible.
The priorities question is an indicator to me about how a person will decide issues. I’d have to look at my past notes, but I believe every PAC member has placed teachers ahead of taxpayers.
Which means we have to rule out Darcy Mingoia, even though she would probably not be a disastrous choice. But we have two candidates who seem to understand better than she does about the commitments being made to the people doing the hiring. It is parents, and broader than that, all taxpayers, who are paying for a particular outcome. We don’t want loyalties to some other constituency standing between us and the people we’ve hired.
Between Bill Morris and Lillian Wanjagi, I’ll let you choose. If I’m valuing fresh ideas, I’d probably go with Ms. Wanjagi. If I’m looking for ability to stand strong against difficult opposition, I’d go with Bill Morris. While I’m technically still undecided, I think I’m leaning toward the incumbent, because we need a guarantee right now that this one position on the board will stand firm.
Posted by Spherical Model at 8:00 AM