We had some debate at our house yesterday, following my post about Terry Pratchett’s Making Money, with a highlight of the book’s low-tech economic modeling machine, the Glooper. Both my sons, Economic Sphere and Political Sphere, thought I was wrong to recommend that you never use economic modeling. I didn’t believe I had said that; I certainly hadn’t meant to. But if they both understood it that way, then clearly I needed to clear up that paragraph.


I ended the post with this:
In the future, it would be wise, in our world, to remember that economic predictors can be counted on for accuracy just about as much as Hubert and his Glooper—if they have put as much careful thought into the correlations as Hubert has. Trusting the experts—ever, under any circumstances—to know better how to spend your money (or whether to keep it in your sock or mattress) is never a good idea. Good rule of thumb.
There are two separate points there. First, economic predictors are frequently inaccurate, requiring careful thought about correlations between behavior, actions, and reactions among consumers, lenders, investors—people involved in economic activity. A model is more accurate when it accurately takes into account the almost infinite number of factors involved.
Second, inaccuracy being generally true, trusting decisions on how you spend your money to centralized government “experts” is a bad idea. I did not clarify at that point that I was referring not to economists in general but to centralized economic planning, thus the misunderstanding.
I like the idea of economic modeling; I am delighted by the ingenious representation of it that is the Glooper. In our world economic models are now pretty much all mechanized on computer. They have their uses both on the macro (whole economy) level and micro (your personal financial planning decisions) level. We have a trusted financial planner, and we’re hoping Economic Sphere will gain experience to step into that role for us at some future point.
What I don’t want is for the administration to use a highly inaccurate (typically Keynesian) model, and then act on that using our tax dollars and future debt in an effort to make changes. EVERY time they do this, they cause negative unexpected consequences. 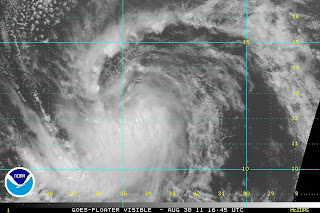 I briefly compared economic modeling to weather forecasting yesterday, and I’d like to expand on that a bit. Weather forecasting is getting better all the time. Computers help. Finding patterns, based on actual measurements, and comparing to what has happened in the past is helpful but not flawless. Usually meteorologists can tell us, “There’s a 30% chance of rain this afternoon.” What we want in information that will help us decide, Should I bring along a jacket or umbrella? Should I wear suede shoes today, or would I be safer with the aging leather? Can we count on the kids’ baseball game, or are we going to get rained out? When I travel, should I pack warmer or lighter clothes?
What the weather report gives us is data. Then we can use that data to make our own decisions. I’m even glad we have the national level of weather predictions (macro level). When we first moved to , weather was exciting and new. We had lived nearly a decade in a place where 330 days a year the prediction was “fair and sunny.” We didn’t even have a local weather station. We relied on one over the state line to a town an hour away. We didn’t need more accuracy, because time of year plus “fair and sunny” was about all you needed to know—except on the rare winter ice storm days. When we got here, the kids were glued to the Weather Channel. Rain was frequent, steamy, and voluminous. We had a tropical storm with six inches of rain within a month of arriving. And if you didn’t like the weather, it would change in an hour or so. We were glad the weather service was there to give us some clue in our weather-related decision making.
But what I would not want would be some central weather center trying to control the weather—or my behavior. What if they decided that fair and sunny with a brief weekly rain was ideal, and so they worked toward that end? What if they believed that taking an umbrella had an effect on weather—or inverse effect; i.e., if people bring an umbrella, they won’t need it, so on the assigned rain days, we must require everyone to leave their umbrellas home—hats and hoods will be permitted in some locales? They may not know my personal sensitivity to heat and cold. They may not know my transportation and parking situation. They may not know my plans for various times of the day. But that doesn’t matter, because they will make decisions for us that will benefit the highest number of people. [Please don’t let this suggestion get to , or it might become reality.]
This is essentially what is happening when central economic planners decide to control the boom and bust cycle with artificially low interest rates (or loose lending policies), stimulus spending, or bailing out failing businesses, thus keeping capital involved in unsuccessful ventures so that it is not available for better uses.
It so happens that yesterday a new central economic planner was announced, professor Alan Krueger. He will replace Austan Goolsby as White House Council of Economic Advisors Chairman, who replaced Christina Romer, who was chosen by Obama upon his election 2 ½ years ago. (There is a team of advisers; only Tim Geithner remains from the original team.)
When Goolsby announced in June his intention to step down, Obama complimented him with this fiction:
Over the past several years, he has helped steer our country out of the worst economic crisis since the Great Depression, and although there is still much work ahead, his insights and counsel have helped lead us toward an economy that is growing and creating millions of jobs. He is one of ’s great economic thinkers.
Seriously? In what alternate reality? In Pratchett’s Discworld, there is a theory in vogue at , summarized by Mr. Bent to Moist von Lipwig, that there are
…an infinite number of universes, in order to allow everything that may happen a place to happen in. This is, of course, nonsense, which they entertain only because they believe words are the same as reality. Now, however, I can disprove that theory, since in such an infinity of worlds there would have to be one where I would applaud your recent actions and, let me assure you, sir, infinity is not that big!
Yes. Given the opportunity, I would like to say those very words to our current tyr…er, uh, president.
Posted by Spherical Model at 10:44 AM